'By equating slaughter with cruelty, you are paving the way for all other animal slaughter to be stopped in the future.' 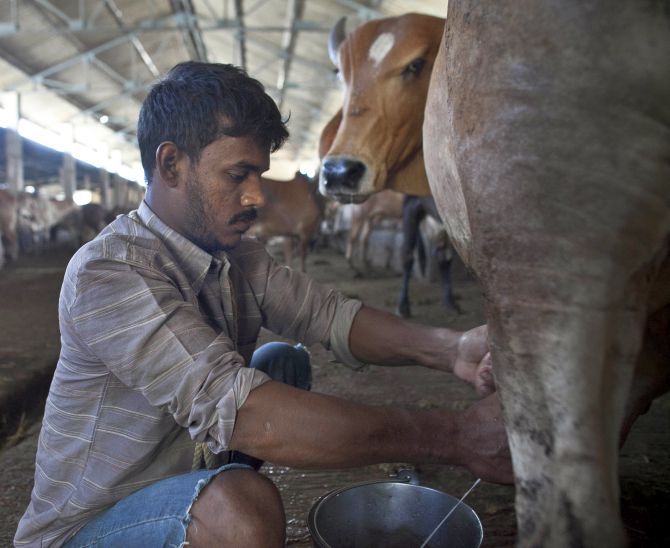 The Modi government's newly framed rules banning the sale of cattle for slaughter has kicked up a storm, with several states, such as West Bengal and Kerala, coming together to protest the Centre's move.

On May 26, the government issued an 'extraordinary' notification, drafted under the Prevention of Cruelty to Animals Act, 1960, banning the sale at cattle markets of bulls, cows, bullocks, buffalos, steers, heifers, calves and camels for slaughter.

It stipulates that cattle can be sold only to farmers and only for agricultural purposes.

Since then protests have been held in several parts of the country against a move that many fear could see the decimation of an industry that is worth about Rs 100,000 crore (Rs 1 trillion), and render thousands of people jobless overnight.

On Tuesday, May 30, the Madras high court stayed the implementation of the rules for four weeks.

Rediff.com's Syed Firdaus Ashraf spoke to Dr Sagari R Ramdas, a trained veterinarian who works with the Food Sovereignty Alliance, India, about the effects of the new rules.

How do you view the new rules passed by the Centre on sale of cattle?

In the law drafted by the Centre, they have said that any marketing (selling) of animals, which is intended for slaughter, will be restricted.

The point being that when any farmer comes to sell his cattle in the market, he is only interested in the transaction; the farmer is not interested in who is buying the animal.

That buyer may be another farmer or some trader who buys the animal and sells it to a slaughter house. He (the farmer) is only interested in selling his animal.

Once you put an underwriting and impose restrictions, then what you are essentially doing is that you are preventing the farmer (from) the right to exercise his choice of whom to sell his cattle to.

When the law says you cannot sell an animal for slaughter, there is a huge assumption that every other buyer is a farmer, which is a false kind of understanding of the livestock economy.

By bringing in these rules, you are completely halting the flow stream of the animal line of marketing because you are saying slaughter is equal to cruelty.

This rule will choke the (cattle market).

Beef is banned in 17 or 18 states and it was already very difficult for a farmer to sell his unproductive cow or bull in the market. So, what is wrong if this rule is applied all over India?

It is wrong because you are equating slaughter with cruelty.

With this logic, you are paving the way for future legislation saying all slaughter is cruel.

Beef is banned in 17, 18 states and that is why smuggling takes place.

In states where beef is banned, poor farmers are desperate to sell their animals.

At present, the situation is that there are traders who move these animals to other states where slaughter is legal.

There are several states where transportation of animals is not illegal.

For example, Telangana, Andhra Pradesh and Orissa, Karnataka there is no ban on transportation and slaughter of bullocks and buffaloes.

Also, there is no ban on the slaughter of buffaloes anywhere in the country.

Now they have included buffaloes too in these new rules.

So you are choking the buffalo trade too.

And by equating slaughter with cruelty, you are paving the way for all other animal slaughter to be stopped in the future.

When you say it is an act of cruelty, the next thing they will do is bring in all other animals.

Why do you presume this law will be extended to other animals too?

Is cruelty only against cows and buffaloes?

Look at the logic in it. Any animal that is being slaughtered is an act of cruelty, they say.

But this act has been brought to stop the smuggling of cows and bulls to other states. Don't you think that will stop?

The question over here is: Are we interested in farmers? Whose interests are we serving?

But the point is cruelty to animals.

If you legalise the trade and transportation of animals, then you will not have unsafe and cruel ways of animal transport.

The reason why smuggling takes place is because those who want to sell their cattle don't have a market to sell it in, as there are no buyers.

Farmers leave their animals on roads after they are of no use to them. They leave them to fend for themselves.

On the contrary, you will never see stray cattle in states where slaughter is legal. So what is more cruel?

Don't you think the illegal trade of cows and bulls will stop after these new rules?

This is a bizarre concept to stop the smuggling of cows and bullocks.

You bring in the concept of smuggling when you make something illegal.

Visit a state like Rajasthan and you will find farmers happily selling their unproductive buffaloes.

They have no problems with buffaloes, but have a problem with cows and bullocks when they are unproductive, and therefore the smuggling happens (as its slaughter is banned). 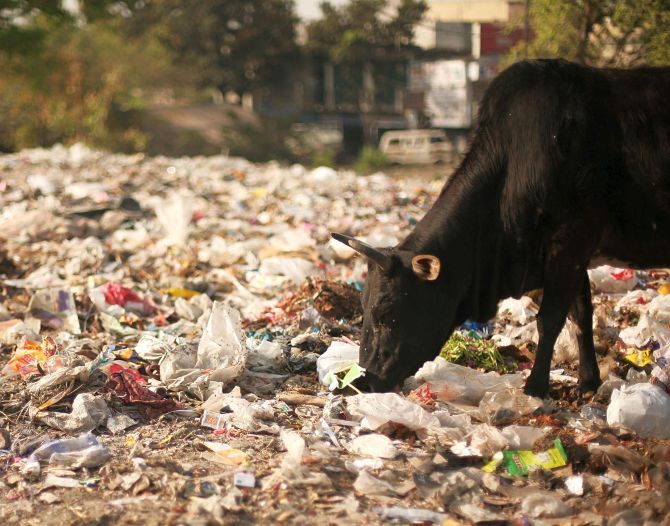 IMAGE: Many who oppose the new notification say it will be more harmful for animals, as farmers who can't afford unproductive animals will abandon them on the streets. Photograph: Mark Kolbe/Getty Images

When this rule discourages the trade of animal for slaughter, then what happens to unproductive animals?

Exactly, that is the question I am raising.

You don't want animals to get slaughtered and farmers don't want to keep their unproductive animals, then the only thing that will happen is that these animals will roam the streets and die of starvation.

Isn't that being cruel?

How can we presume that farmers must be responsible to take care of unproductive animal until that animal dies?

Farmers need a market for an unproductive animal.

'You don't want animals to be slaughtered and farmers don't want to keep their unproductive animals; the only thing that will happen is that these animals will roam the streets and die of starvation.'

For the last two years these industries have not suffered. The leather industry has not shut down and the production of milk has not fallen.

Milk production has not fallen because this act has just been introduced.

Look at Maharashtra when they introduced a ban on bullocks.

All studies show that there is a complete collapse in the sales of bullocks and the value of the cow has gone down.

Today, no one wants to buy bullocks.

Now we are importing (animal) skin and hide from China for the leather industry.

Because of the choking of slaughter houses, the leather industry in Dharavi (Mumbai) has been completely destroyed. You investigate that to find out.

Will these new rules affect the price of milk?

Once these rules come into operation, only then will milk prices get affected.

There will be no point in the cow and buffalo business.

The traders will not be in this business. Then who will buy these unproductive buffaloes from farmers?

So will we see abandoned buffaloes also roaming the streets, just like we see cows and bulls?

For all you know, that may soon happen.

Do you think this is an attack on the non-vegetarian way of life?

The government is in denial that India is a beef-consuming country. There are a lot of people who eat beef.

So when a majority of people in this country are meat eaters, you are bringing in these rules, then who are you targeting?

They are targeting the notion of what India is.

By doing that you are targeting the people's cultural preference to food and the livelihood of farmers.

We have jobless growth and now the government wants to destroy livelihood by this act.

There are farmers and workers in the leather industry who will get affected.

As citizens of India, we cannot be like an ostrich which buries its head in the sand.