'There were areas where the JD-S put up weak candidates against the Congress to benefit the BJP.' 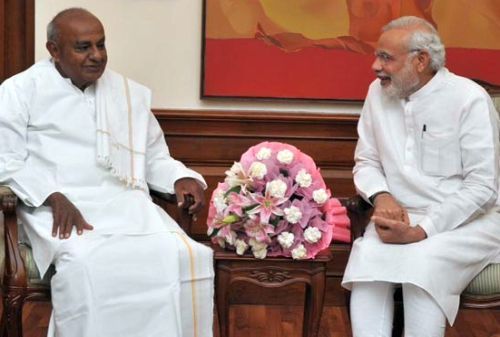 How and why did Siddaramaiah lose the Karnataka election despite the all-round perception that he was all set to be re-elected?

Did Bengaluru let down the BJP -- bucking the trend whereby metros usually vote for the party?

What impact will the Karnataka election results have on the 2019 Lok Sabha election?

"There was an intrinsic alliance between the BJP and the JD-S, but it became irrelevant after the election results came out," Professor Narendra Pani -- a commentator on Karnataka politics -- tells Rediff.com’s Syed Firdaus Ashraf.

Siddaramaiah was the frontrunner. Where did he go wrong?

It was a rejection of the model he sells, of high growth generating resources for welfare.

He used that model extensively.

A high level of growth has very extensive welfare projects and his failure politically is a commentary on that strategy itself.

You cannot make up for unequal growth through welfare schemes.

He generated high growth and he did well in welfare but still lost, indicating that the strategy itself is at fault.

You need to come up with political economy for the state that generates widespread, politically relevant benefits.

Do you feel it was a political blunder on Siddaramaiah's part to give the Lingayats a minority status?

Not at all, as it is a very narrow way to look at it.

Even electorally you cannot show that, because there are a number of Lingayats who were elected on a Congress ticket.

The minister M B Patil who pushed for the Lingayat reservation won by a far bigger margin than last time.

But that is the narrative being played out against the Congress after it lost the election.

Lingayats vote as a vote bank, but they make their decisions constituency-wise.

They may have voted against Siddaramaiah to prove a point, that if they want a separate religion then they can do that on their own and not with the support of some backward class leader.

But again M B Patil won with a big margin.

Why did the Vokkaligas dump the Congress?

The Vokkaligas had a complete consolidation this time behind Deve Gowda (who heads the Janata Dal-Secular.)

Once consolidation took place, there was no place for others.

They made exceptions for strong Vokkaliga leaders of the Congress like D K Shivakumar, who won by a huge margin.

But by and large, they identified with Deve Gowda and the JD-S.

The only strength of the JD-S is Vokkaligas.

They wooed them and in fact they don't have much representation from other castes (in their party).

Deve Gowda is the highest and most respected Vokkaliga leader for decades now.

Was corruption a non-issue in the election as people voted for the BJP in spite of the party giving tickets to the Reddy brothers?

It works if they are corrupt and share their corruption, as a country we are okay with that.

I don't think we can take a high moral stand for a politician when as a country we don't follow it ourselves.

One factor which Siddaramaiah was banking on was the north-south divide. He gave the feeling that the BJP was a Hindi-speaking party trying to impose Hindi on Kannadigas. Why didn't the regional factor work?

I think that is a part of Siddaramaiah's politics for decades and it is not new.

He started his politics as (a member of) a Karnataka watchdog committee. So this was not a tactical move that was brought in for this election.

It is said the BJP micromanaged elections in Karnataka very well at the booth level and therefore it won in spite of getting a 2 percent vote share less than the Congress.

Partly yes for the micromanagement, but it is also because of the unspoken deal of the BJP with the JD-S.

Like in Chamundeshwari, the BJP put up a weak candidate so it became a direct fight between Siddaramaiah and the JD-S.

Elsewhere, the JD-S put up former Congress strongmen who would take away Congress votes.

There was an intrinsic alliance between the BJP and the JD-S, but it became irrelevant after the election results came out.

In 2013, the BJP won just 5 seats in coastal Karnataka. This election it won 18 out of 21 seats. Did polarisation help?

People talk of polarisation, but that is not entirely true because one of the Congressmen who won from coastal Karnataka is a Muslim (U T Abdul Khader from Mangalore) and he won from a Hindu constituency.

It was always a communally polarised area in Karnataka and I don't think it became more polarised than before.

What is likely to occur is micromanagement because this is the area which has seen massive movement out of agriculture.

The BJP put up new candidates who could relate to those issues.

The Congress on the other hand put up old candidates who were not fully sensitive to these issues.

The BJP usually does well in urban centres. But in Bengaluru, out of 26 seats, 12 went to the BJP, 12 to the Congress, and the JD-S bagged two. Why was the capital city ambivalent to the BJP?

Last time also, the BJP did a little better than the Congress.

It was marginal then.

The Congress has a set of MLAs who are deeply entrenched and they are taking care of their constituency.

This was a constituency voting pattern.

The largest margin in the state was also by a Congress candidate from Bangalore city.

This was constituency-specific. The Karnataka election was not a wave election.

This election was constituency-specific and there was inspecific (tacit alliance ) between the BJP and the JD-S.

These two factors are largely the outcome of the elections, otherwise you cannot see the result where the Congress got a higher vote share than 2013 and yet got less than one-third of seats from what they won in 2013.

Why do you think there was no wave in spite of the fact that Modi campaigned and Amit A Shah spent more than a month in Karnataka?

Amit Shah is not a charismatic leader like Modi.

Everyone said that there was no anti-incumbency has simply been borne out.

The BJP managed a tacit alliance with the JD-S and other issues of micromanagement which obstructed in the increase of vote share.

The Congress party did extremely well given the relative vote share.

People say Siddaramaiah was arrogant and therefore the Congress lost.

There was a dominant caste alliance against Siddaramaiah largely because they do not expect a backward class person to speak to them on equal terms.

Much of this argument of arrogance was that.

He spoke of AHINDA (the Kannada acronym for minorities, backward classes and Dalits) and felt he was the representative of AHINDA.

He spoke on equal terms. That is part of his ideology.

The JD-S has put up a better than expected show, beating all predictions of gloom. Is it premature to write off regional parties?

The BJP's rise has been largely at the cost of the Congress.

Even in 2014, regional parties had done well. Be it in Odisha or Tamil Nadu and other places.

The BJP's rise is simply because the Congress collapsed and the national party vote has gone to the BJP.

Do you think the Karnataka election results will have a bearing on the 2019 Lok Sabha elections?

Unless the Congress recovers, the BJP will retain the concentration of national party vote.

However, wherever it comes against regional party votes, then it won't do well.