'There is tacit understanding between the BJP and AIUDF'

'One reason given for the failure of the Congress in Assam was due to the alliance with the AIUDF.' In a surprising move the Congress parted ways with the All India United Democratic Front in Assam.

The Congress had tied up with the AIUDF as part of its Mahajot, a 10-party alliance, before the assembly elections in Assam, but still lost to the BJP .

The AIUDF called the Congress decision to snap the alliance as 'immature', but the Congress is in no mood to reconsider its decision.

"If we had contested AIUDF seats and had there been no alliance with them, we could have won those seats," Bobbeeta Sharma, media chairperson of the Congress's Assam unit, tells Syed Firdaus Ashraf/Rediff.com.

Why did the Congress suddenly break its alliance with the AIUDF?

There is nothing sudden about it. Introspection was going on among party members after feedback from grassroot workers.

When the new president of the Congress took over in Assam, he formed five new committees for the forthcoming bye-elections in the five assembly constituencies under senior leaders of the party.

He also took feedback from the grassroot workers in the state.

He travelled across Assam and got feedback from party workers, that one of the reasons given for the failure of the Congress in the state was due to the alliance with the AIUDF.

The present situation is such that people are saying the public perception of the Congress party is not what it used to be.

Moreover, the AIUDF is giving contradictory statements over the Bharatiya Janata Party.

Some of their senior leaders are going overboard in praising the BJP's work.

Are you referring to AIUDF chief Badruddin Ajmal's brother Sirajuddin Ajmal's praise for the BJP in the state assembly?

By giving statements like the present CM of Assam is the best CM in India.

This kind of statement from an ally of the Congress dents our party's image.

All these facts are being pointed out by our grassroot workers.

They have pointed out an important fact that during the elections Himanta Biswas (then finance minister of Assam and now chief minister) in his election rallies stated that Ajmal's foundation has terror links and gets foreign funds during elections.

The BJP then accused the Congress of having an alliance with the Ajmal foundation.

A BJP worker also filed an FIR against the Ajmal foundation.

But immediately after the BJP formed the government, the same Ajmal foundation gives a huge donation to the CM's relief fund of Assam.

This fund was accepted by the CM of Assam.

This kind of contradictory statements by the BJP and AIUDF show there is some tacit understanding between the two.

This is what Congress workers feel.

This is the perception among the people on the ground.

But isn't this fund for the state of Assam and not for the BJP?

That is not the question.

The question is you (the BJP) are accusing the Ajmal foundation of terror links before the elections, spreading so much misinformation as if it is true.

And when you come to power you accept money from the same foundation.

The same foundation agrees to donate money too.

This kind of behaviour by the BJP and the AIUDF has baffled Congress workers.

Your Assam unit president had meetings with Ajmal's party members two days before the split. 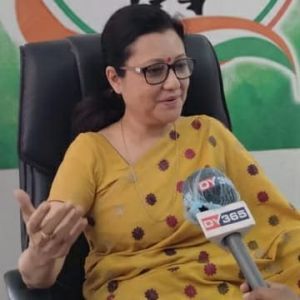 This was also an issue which was put forward by our workers.

They felt that if we had contested those AIUDF seats and had there been no alliance with them we could have won those seats.

Is it true that Hindu voters in Assam felt that the Congress should not have tied up with the AIUDF?

This was also an argument given by grassroot workers of the Congress in upper Assam.

But yes, in Assam regional parties like the Assam Jatiya Parishad and the RD (the Raijor Dal founded by activist Akhil Gogoi) took away our anti-BJP votes.

The reason was because of our alliance with the AIUDF, as our grass root workers told us.

These regional parties cut into our votes.

Are you saying so because the Congress got 29.67 per cent votes in the 2021 assembly elections and the BJP got 33.21 percent?

In Assam, the BJP and the Congress had a close contest.

We were short of 14 seats to form the government.

It was a very close contest.

The regional parties took away our votes.

The late Tarun Gogoi, stalwart leader of the Congress in Assam, had always opposed an alliance with the AIUDF. Why was that norm broken this time?

This time, it was felt that if all parties come together then we will be able to defeat the BJP.

We had 10 parties in the Mahajot.

We felt that we will win because of the negative feeling among voters against the BJP.

This was our feeling, but the kind of misinformation spread against the Congress was huge.

The AIUDF says the Congress is unable to hold on to its own MLAs as two of your MLAs joined the BJP after elections, so why are you blaming it for siding with the BJP?

Even one of their own MLAs (the AIUDF's lone Hindu MLA, Phani Talukdar) has joined the BJP.

Who can stop anyone if someone wants to go?

Nobody can stop them.

If they feel their ideology has changed overnight, then you cannot stop them from leaving the party.

One has to be ideologically strong, only then you can fight without being in power.

Apparently, Sushmita Dev too was not happy with the alliance with the AIUDF and therefore she quit the party. Is it true?

A day before Sushmita Dev resigned, she was a part of delegation of the Congress from Assam who went to meet Rahulji and Soniaji.

The very next day she joined the Trinamool Congress.

How could she do that?

I felt there was some loss of integrity on her part as how could she go and join the TMC the very next day after our delegation met high command?

Lot of introspection needs to be done for such an attitude because she was holding a very high post in the Congress party.

She was a tall leader from the Barak valley in Assam.

She also admitted that she has no complaint against the Congress.

She said she quit because of her personal goals and had no complaints against the Congress.

She was not unhappy with the Congress party.