'Only when they are in a group or in mobs, then they attack.' Among those who refused to keep silent despite the threat to his life is the outspoken Goan author Damodar Mazuo.

"If we keep quiet today, they will go all out to finish this tribe who write or speak against them," Mazuo tells Neeta Kolhatkar.

Is there a culture of silence that is sweeping our society?

There is a fear among people that they may have to pay a price if they speak, so it is best to keep quiet.

Sometimes, most people are carried away by social media or what is being said by the regime through the mainstream media.

Sane people must come out and speak.

The problem is most of the media endorses the government's point of view.

At least they voice a concern and allow others to write a contrarian view to that of the regime.

Except for two, three channels, the rest of the media is with the government.

Also, the moment someone speaks out, there is pressure exercised and that is the reason most stay away. Then you are labelled, pro and anti.

There was a time till recently we had in Maharashtra free thinkers. We saw how they were murdered. You have spoken out against the targeting of freethinkers.

I was always outspoken.

In Goa we have lived in such harmony, living in coexistence. Now we find that fabric is torn apart.

That pains us and being a Goan I feel it all the more.

This change is felt more outside, but I feel shocked how people can tolerate it.

Writers have to speak up when something wrong is taking place.

Should it not be natural for writers to speak against wrongs in society?

See, there always were writers who had different ideologies, but nobody has come out like S L Bhyrappa. Laughs.

He was subdued until U R Ananthamurthy passed away. But after that, he has spoken more and more under this current government.

Under the Bharatiya Janata Party regime, many writers who did not have the courage to speak openly have spoken up.

At the same time, many people who were earlier not open about their rightist ideology came out.

Never before did even people who belonged to the RSS come out in the open.

Were they prevented or banned?

Does today's writing reflect the grim reality of our society?

In a way, they do have the pulse of the people, in a way.

See, I belong to Goa and I write about my society.

Yet, I don't think all Goans read me.

But those who know me, they will be influenced to some extent by my thoughts.

Even if they have some inhibitions, after reading, they will rethink, I believe in it.

That is why writers have to be more responsible while speaking or coming out in the open.

Just keeping quiet or saying, 'I'm not bothered, why should I speak?' is not the right attitude.

I think writers do make a difference.

Artists, film and theatre people, we should come out in the open. Particularly those who are respected by the people.

People know, if a certain person speaks out, there has to be some truth in it.

Now if you believe it, see the difference.

I am very happy Shaheen Bagh is happening.

People may criticise them, but it is a big achievement.

Silently, quietly, it is something different.

That is why the government is more bothered by them. 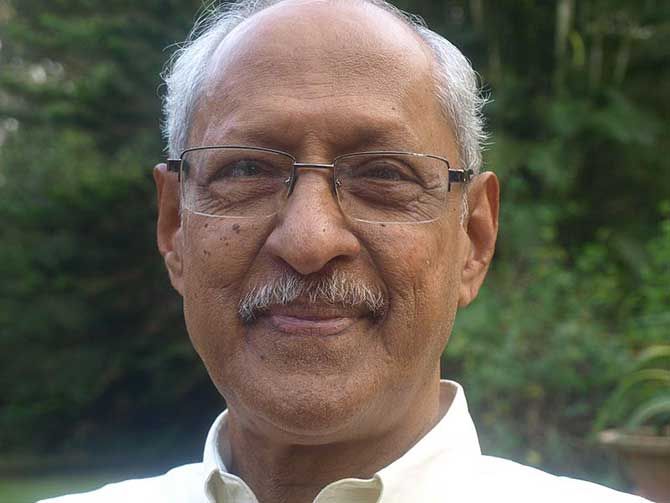 The government is extremely annoyed with peoples's protests.

If we keep quiet today, they will go all out to finish this tribe who write or speak against them.

They are not scared of Muslims or the Muslim leaders. They are more scared of liberal and secular people within the Hindus.

When some maulana speaks up, members of the majority will say they are always like that.

But if influential, secular, elements from within Hindus speak, they are more scared of them.

Do you feel fear?

Let me tell you, the perpetrators are timid.

They are real cowards.

Only when they are in a group or in mobs, then they attack.

I am not scared of them or afraid of their people.

I am fortunate because I am loved in Goa.

They also know I don't criticise or name any individual.

I speak only against an ideology.

Millenials have shown the way, they are not scared of anyone. Can we rightly say they are our hope?

Yes, that is true, they are not scared.

That is precisely what is bothering the leaders and the fundamentalists.

People are not with them, but they are scared. They are not coming out in the open.

They know these leaders are vengeful, so that is why people fear they may cause some harm to their families, business or jobs.

The young generation are bold, they are also inspired.

You said the narrative need to be changed. But is that even possible, in the current circumstances?

Secular people like me, who are rational thinkers, face a huge problem.

I'm a non-believer and when I go out, I can't play to their tune. So there I fail.

Whereas seasoned politicians like Arvind Kejriwal know how to appease them. He can go to a Hanuman temple with a purpose. I can't do that.

I respect the faith of others, but I can't reach out because I don't believe in those rituals.

I read that some college is organising a maha yagya to clean the minds of their students. It is shocking.

When I spoke to some teachers, they said there is power in the mantras and the fumes can help.

Educated people talk like this, it is a total failure.

We have to counter it with people from their lot, but those who have a contrarian view.