'The Kohinoor has wreaked havoc in its trail'

‘After Nader Shah’s death, in the chaos that followed, a court eunuch called Agha Mohammed tortured Nader’s grandson Shah Rukh to find out where the diamond was.

‘Shah Rukh was tied to a chair and his head shaved. A crown of paste was built on his pate, and, in a scene reminiscent of The Game Of Thrones, Agha Mohammed poured a jug of molten lead into the crown.’

Two authors track a diamond with a bloody history. 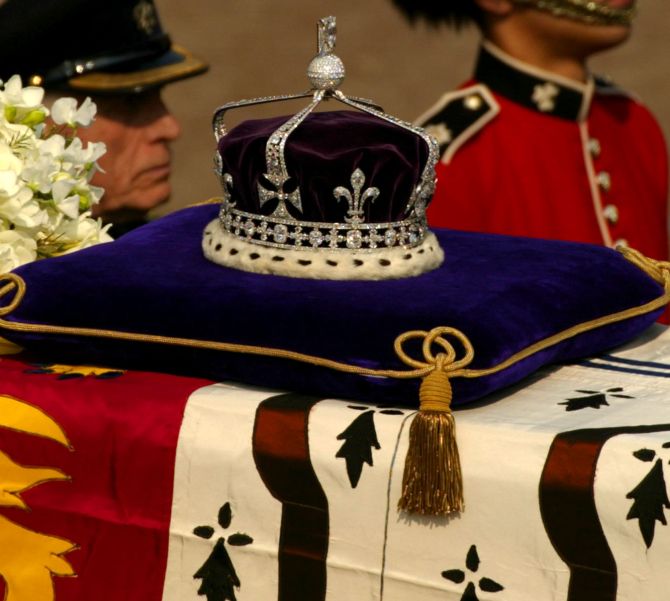 The Kohinoor might not be the biggest diamond in the world, but it is the most famous. Or ‘infamous’, as historians William Dalrymple and Anita Anand assert in their new book, Kohinoor.

In conversation with Uttaran Das Gupta, they spoke of it bloody history and the process of dispelling myths that have surrounded the gem for centuries.

Should India ask for the Kohinoor to be returned?

Dalrymple: Not really for us to make the judgement. It is the prerogative of politicians and policymakers.

At present, there are at least five countries staking a claim to it -- India, Pakistan, Afghanistan, Iran and the Taliban. So, it’s difficult to say how all these claims can be worked out.

Anand: If there are any state agents or legal agents planning to build a case for the return of the diamond, we have done the case work for them.

How did the two of you decided to collaborate on this project?

Dalrymple: It all began at a Jaipur Literature Festival event at the Southbank, London. Besides Anita and me, there was also Navtej Sarna (currently the Indian ambassador to the US) on the panel.

We realised that all three of us knew a part of the history of the diamond, but not the whole.

I had written about it in Return Of A King, Navtej in The Exile and Anita in Sophia.

As we came off the stage we decided we would work on a book together, but as Navtej was appointed as the Indian high commissioner to the UK, he couldn’t be a part of the project.

Anand: As I had written the biography of Ranjit Singh’s granddaughter, Sophia Duleep Singh, I had a few years of experience in this.

William, of course, has written extensively on late Mughal history.

It was a sort of a natural habitat for us.

What kind of research did you do for this book?

Dalrymple: We consulted a number of archives -- in India, the UK, and also Persian archives.

There has been a sort of popular history that has been in currency of how the diamond came into the possession of the Mughals. But, the fact is, there is no unambiguous mention of the gem before Persian historian Mohammed Kazim Marvi’s account of Nader Shah’s invasion of India.

Recently, the Indian government said the diamond was given willingly by Ranjit Singh, the ruler of Punjab, to the British.

Anand: Ranjit Singh died in 1839; the British got their hands on the Kohinoor in a decade later from Ranjit Singh’s teenage son, Duleep Singh.

The Sikh forces had been defeated in the Anglo-Sikh wars and an isolated Duleep Singh was forced to give it up.

Later in life, he would try to claim it back, initiating an unsuccessful legal action.

The history of the Kohinoor is one of blood and gore, isn’t it?

Dalrymple: Oh yes, it has wreaked havoc in its trail.

Anita and I came across a number of cases of ghoulish torture and murders.

In the Sikh empire itself, a number of claimants were murdered and poisoned.

Before that, after Nader Shah’s death, in the chaos that followed, a court eunuch called Agha Mohammed tortured Nader’s grandson Shah Rukh to find out where the diamond was.

Shah Rukh was tied to a chair and his head shaved. A crown of paste was built on his pate, and, in a scene reminiscent of The Game Of Thrones, Agha Mohammed poured a jug of molten lead into the crown.

What kind of awareness would you say there is in the UK about the Kohinoor?

Dalrymple: It is by far the most well-known diamond in the world.

Surprisingly, it was not always so.

For the Mughals, the Kohinoor was always paired with the Timur’s ruby.

In the Mughal treasury, there was also the Dariya-i-Noor, which is now in the state treasury at Tehran.

There was also the other Great Mughal diamond, now known as the Orlov diamond, which was purchased in Amsterdam by Count Orlov, who was once the lover of Catherine the Great of Russia. It is now in the Kremlin.

Its global fame began when it was exhibited at the Great Exhibition in 1851. And it continues till the present times.

Anand: The Kohinoor still burns bright in the consciousness of the subcontinent’s expatriates. There are restaurants named after it, pencil companies...

For the white UK citizens, the colonial history is often viewed through rose-tinted spectacles. They think of it as polo matches with the maharajas and cricket matches.

I think some people would be very surprised by our book.