'You seldom get information of this kind several hours in advance, exactly where they are going to strike. But we still couldn't act on this intelligence.'

Colonel Ajai Shukla (retd) has been scathing about the manner in which India's national security team handled the Pathankot airbase terrorist attack.

Prasanna D Zore/Rediff.com spoke to Colonel Shukla to find out why despite advance intelligence the terrorists still attacked the airbase and took precious Indian lives. 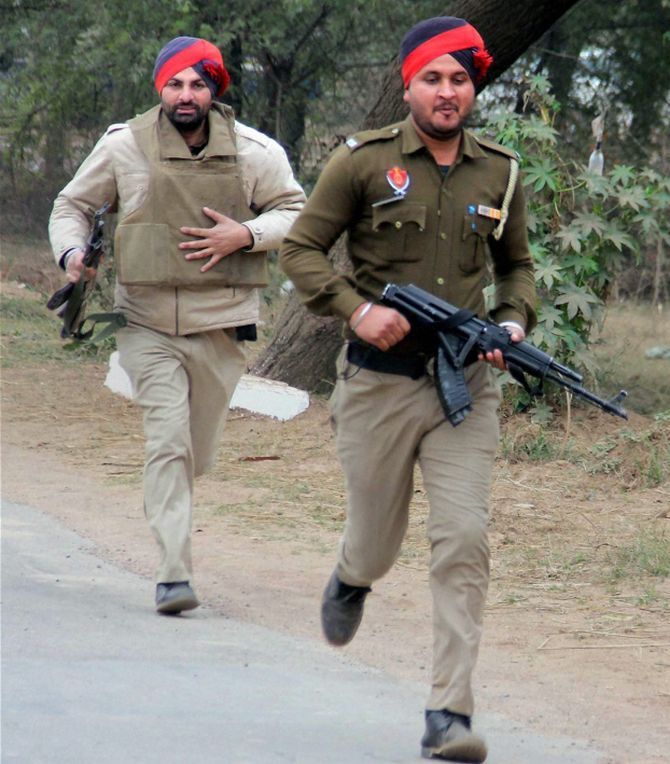 IMAGE: 'What should have been done immediately upon receiving information about an impending terrorist attack is to secure the airbase, which means putting a large number of people at various pickets all around the airbase.'

In your column, you said National Security Adviser Ajit Doval handled the Pathankot airbase attacks 'ineptly' and it was a 'debacle.' What could he have done?

You also say in the column that the NSG (National Security Guard) is trained to handle pinpoint operations. Didn't the same NSG flush out terrorists during the 26/11 Mumbai siege?

You understand the difference between clearing a hotel and securing a large piece of land. When you have to secure an area and defend it against terrorists who are attacking it, you require a different operation, one that requires lot of manpower.

When you have to do an attack operation on terrorists holed up in a hotel and clear it room by room is a different operation. Now the Mumbai kind of room clearance operations, which are pinpoint type of attack operations, is what the NSG is geared and equipped and meant to handle.

On the other hand, what should have been done (at Pathankot) immediately upon receiving information about an impending terrorist attack is to secure the airbase, which means putting a large number of people at various pickets all around the airbase which means you dominate the area and don't give freedom of movement (to terrorists).

How could these six or so terrorists have entered the airbase? If there were intelligence inputs, why wasn't the perimeter of the Pathankot airbase secured?

Because it was such a handful of people who had to secure a very large premise, which meant there were large gaps in between the pickets and these terrorists ingressed through those gaps.

When you have a larger number of people deployed, these gaps get reduced and minimise the chances of terrorists taking advantage of these gaps.

The point that I am making about the larger presence of manpower is because the biggest problem, in securing a large area, is manpower. And when you have just 150 NSG commandos (to secure such a huge air base)... (it) is like using a heart surgeon to sort of put a band aid on a little wound.

The NSG is a pinpoint strike counter-terrorist unit. It is not meant to do sentry duty on large airfields.

Why do you think the NSA asked the NSG to handle this operation instead of the army, which as you noted in your column, has the biggest contingent at Pathankot, almost 50,000 soldiers readily available?

It is quite obvious because he wanted the credit for himself. And this is how Ajit Doval functions. He is a credit-seeker.

Seeking credit at the cost of national security?

Everybody wants to be seen as quite hot on national security.

Lieutenant Colonel Niranjan Kumar lost his life during the mopping up operation from a booby trap left by the terrorists inside the airbase. Why couldn't the NSG command second guess that the bodies of the dead terrorists could have been laden with grenades? The precious life of an Indian soldier could have been saved.

At that stage people start making operational mistakes because of the pressure. This was unfair pressure put on the NSG.

But precious lives were lost...

That is my point to you that all the lives that were lost (at Pathankot) were lost due to this unfair pressure.

But unfortunately, because of the lack of preparedness, you got the DSC (Defence Security Corps) people shot in their cook house. This speaks of a complete operational blunder.

Are we expecting more and more audacious attacks on India's military assets?

Not just on these (military assets), but also on softer targets. The aim of the jihadis is to disrupt the peace process. Their aim is to only make an impact and that impact is made by mass casualties or by striking high value targets.

I expect more such (like Pathankot) attacks to happen.

What measures should the Indian security establishment take to prevent such anticipated attacks?

The only thing you can do (in such attacks or in anticipation of such attacks) is to beef up the security around large number of establishments which requires a lot of manpower in doing so and to strengthen the intelligence grid so that you have advanced information.

But what is sad is that the information we had in this particular case was pure gold. You seldom get information of this kind several hours in advance, exactly where they are going to strike you know that. But we still couldn't act on this intelligence.

That is actionable input and that is what we had in this case, which rarely happens, we had specific information to take advantage of that.

In the aftermath of the Pathankot attack, do you think Mr Modi will be more cautious while engaging with Pakistan?

I would not like to second guess what the prime minister would choose to do as a result of this (attack)...

I mean he has already made it clear that he is dealing with Pakistan on a more cautious sort of footing and so you have national security adviser dialogue before the foreign secretaries meeting, according to some reports, and that proves that he is cautious.

He has slowed down in his enthusiasm just like any other Indian prime minister before him.

But I don't think he will be deflected in his purpose by this attack. If the attack had been more successful or if tomorrow two more jihadis pop out of the shrubbery at Pathankot and blow up MIGs over there, then that will be a different story.