'R N Kao was a spymaster, an institution builder and a gentleman.' 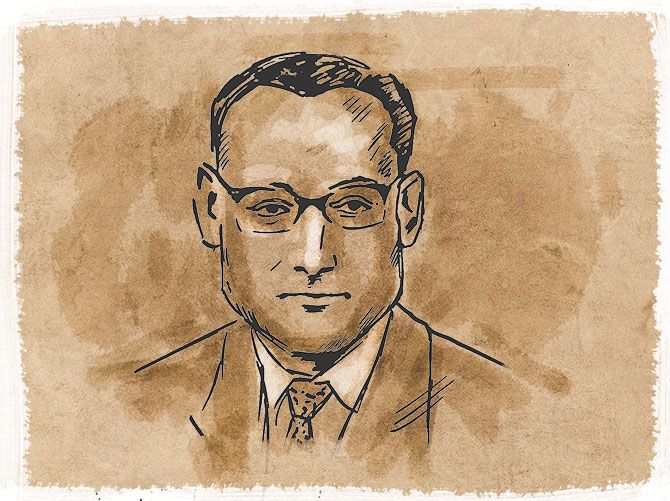 IMAGE: Rameshwar Nath Kao was the first chief of India's external intelligence agency, the Research and Analysis Wing. He played a major part in helping the Bengalis of East Pakistan create a new nation, secured the merger of Sikkim into the Indian nation and built R&AW into a formidable outfit, comparable to the best in the world. Illustration: Dominic Xavier/Rediff.com.

"R N Kao never operated underground or undercover or clandestinely or ran agents. He did run agents, but not by living in any other country. Of course, he had a great network, people admired him and respected him. He was clearly a leader who built institutions and that needs to be emphasised."

Nitin A Gokhale the distinguished national security analyst and author of R N Kao: A Gentleman Spymaster, tells Rediff.com's Archana Masih about the reticent and legendary spymaster who founded R&AW.

There has been really no comprehensive book about Mr Kao's colossal role in Indian intelligence. Is your book aimed at correcting that gaping hole? What were the difficulties in researching the life, times and works of a man who was deeply private?

The earlier books on R N Kao do not give the big picture about the kind of person he was; how he was in the forefront of building institutions like ARC (the Aviation Research Centre) and the Research & Analysis Wing; and how he became such an important person in intelligence.

There was difficulty in finding out about his early life, his joining the police in 1940 etc.

One had to work hard on the family, co-workers and organisation to get photographs.

Luckily he had left behind a recording of his memoirs which were transcribed into seven different files.

Four of those files have been declassified in the Nehru Memorial Museum and Library.

One is about his early life, how his mother brought them up etc.

The second is about him joining the Intelligence Bureau and Indian Police.

The third is on his assignment to Ghana which actually started his upward rise in the hierarchy.

The fourth is about the Air India's Kashmir Princess crash investigation which propelled him into the limelight in 1955.

The bulky files are his personal recollections, transcribed and preserved there.

Three files are still not open -- because he said they will be opened 25 years after his death -- so they will be available in 2027.

Those files are about Bangladesh, the merger of Sikkim and Mrs Indira Gandhi's assassination.

The files were transcribed by an admirer who was a foreign service officer in 1999-2000.

What could you learn from those papers? It is said he was photographed only twice. Is that true?

That is not true. I have 16 photographs of him.

He was a shy and private man. He believed he need not give any public interview or statements. The only interview that I know of him was to Pupul Jayakar (cultural adviser and one of Indira Gandhi's closest friends) published in 1993.

I have used some quotes from that interview. Apart from that he did not give any interviews, did not appear in any public functions. His privacy was legendary which is mentioned by his son-in-law.

I learnt he had a difficult childhood because he lost his father when he was 6. The family moved around a bit, he made good when he joined the law faculty in Allahabad and was selected to the Indian Police which really opened up the world for him.

He was lucky because at that time, instead of 3 candidates, 4 were chosen and he joined the Indian Police in 1940.

In 1947 he was selected to join the Intelligence Bureau and his rise began from there. He became chief security officer to Prime Minister Jawaharlal Nehru.

Nehru sent him on the advice of another legendary spy B N Mullick (then director, Intelligence Bureau) to investigate the Air India Kashmir Princess air crash. The plane crashed off the coast of Indonesia in 1955. It was supposed to have carried (then Chinese premier) Zhou Enlai.

He spent six months in Hong Kong and China which gave him a glimpse of the secret service, espionage and started his connection with important people who were on the rise in the world of intelligence.

In 1957 he was chosen to establish the foreign intelligence service bureau of the newly independent Ghana after it asked for India's help.

He spent a year in Ghana.

What are some of the qualities that you discovered about this deeply private man who built an institution from scratch and trained a legion of men?

He was very meticulous. He had a great memory. He knew how to delegate and choose the best people to work for him.

He had a distinct personality. He wasn't very gregarious and was uncomfortable in public. He wasn't even comfortable eating in public, but he knew how to extract the best out of people, and that really stands out.

Indian intelligence officers prefer to stay behind a veil of mystery -- why does India have a poor record of maintaining records of its intelligence history?

As a national trait we lack institutional memory. Even within the intelligence service archives, it is only individual efforts that have resulted in some records being kept or correspondence being preserved in a systematic manner.

There is a kind of waywardness. I was surprised to see some of the letters written by R N Kao to P N Haksar (Indira Gandhi's principal secretary) in the Haksar papers.

If they were not supposed to be declassified, then that hasn't been adhered to, so there is no uniformity in how individuals in the highest and crucial positions treat secret matters.

I found many of R N Kao's letters and notes that he was guarding fiercely readily available in the NMML under the P N Haksar papers.

Mr B Raman (a senior R&AW officer and a distinguished contributor to Rediff.com until his death) had written on Rediff that in 1983, when Mr Kao was senior adviser to Mrs Gandhi, he persuaded R&AW to set up a historical division.
After Mr Kao left office, this division was wound up before it could complete its work. Is there an archival division at R&AW now?

Unfortunately, everyone speaks about the particular incident, but I haven't found in my interactions with the previous and current staff that they have an archival division or archival papers.

Even if there is an archival division there is no official sanction to declassify those papers. It is not a good thing for researchers, but perhaps organisations want to keep it that way.

Was it equally challenging to get information from R&AW officers who had worked with him?

Some were very open, some only spoke about his personality and not his operations.

A very happy coincidence was that one of the key people in the Bangladesh operations was P N Banerjee, joint secretary, R&AW, posted in Calcutta.

He was the key pointsperson for East Pakistan, who died in 1974. A former R&AW official mentioned to me that his son was a journalist in Calcutta.

I dug into my memory and thought I may know this person and called my old boss Bobby Banerjee of The Telegraph who is now 64, and he turned out to be his son!

He shared a very old picture of his father, who was also very rarely photographed, and mother with Mujibur Rahman's family in 1972 in Dhaka.

He played a very important role in the early years to merge Sikkim with India which started in December 1972.

He died in July 1974 and the merger happened in 1975. He played two crucial roles that have never been documented.

It is the first time we are speaking about him in such detail in this book. Mr Banerjee was Mr Kao's trusted man in Bangladesh and Sikkim. 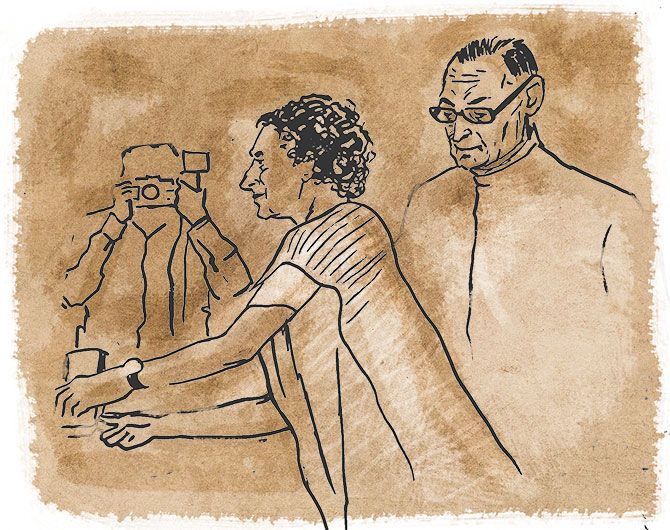 I don't know enough about the relationship between prime ministers and R&AW chiefs.

Twenty years ago, the institution of national security adviser was created which forms a layer in between. Earlier, the (intelligence agency) chiefs directly met the prime minister, but after that the NSA became the go between. 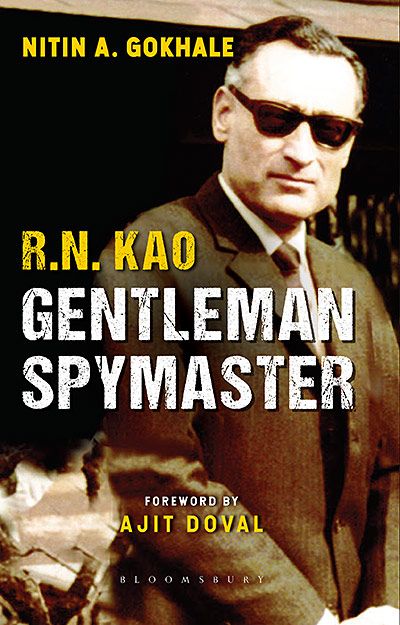 Mrs Gandhi knew R N Kao from 1955 onwards even before she became prime minister. She had seen him with her father because he was Prime Minister Nehru's security officer.

One important point about R N Kao was that he was not a classical undercover operative. He was a spymaster and institution builder.

Therefore, the title of my book is R N Kao: Gentleman Spymaster.

He never operated underground or undercover or clandestinely or ran agents. He did run agents, but not by living in any other country.

Of course, he had a great network, people admired him and respected him. He was clearly a leader who built institutions and that needs to be emphasised.