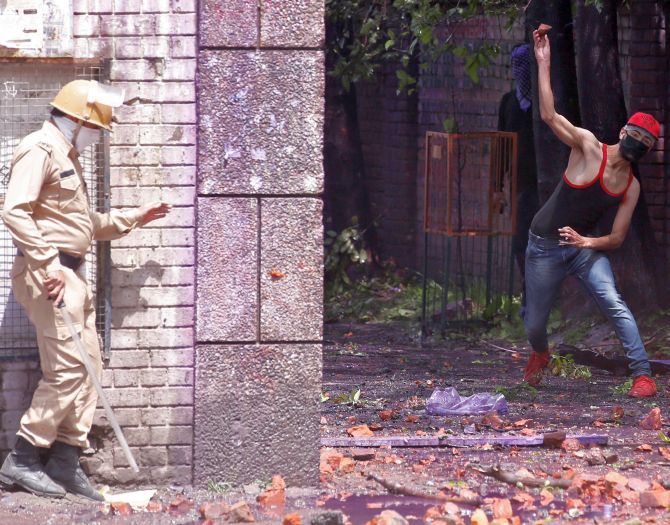 IMAGE: A student throws a stone at a policemen during a protest in Srinagar. Photograph: Danish Ismail/Reuters

In a mission to support security forces in Jammu and Kashmir, a squad called the Jan Sena began its journey to the Kashmir valley on May 7, to respond to the stone-pelting locals by giving them a dose of their own medicine -- pelting stones back at them.

The group, which includes Muslims and sadhus, is part of a voluntary organisation set up by Kanpur-based Balyogi Arun Puri Chaitanya Maharaj.

Why are you organising this movement against Kashmiri stone-pelters?

This move has come about after we saw what happened to our jawans in Jammu-Kashmir post the elections (a couple of CRPF jawans were mocked, pushed around and kicked by Kashmiri protesters).

The Hurriyat and others mislead Kashmiri youngsters. Now they are insulting our army and a nation of 125 crore people.

They want Jammu and Kashmir to secede from India and therefore we have formed this Jan Sena.

When did you form this group?

We formed it a month ago. 15,000 youth have joined our Sena. We want this Sena to go to Kashmir and give a befitting reply to Kashmiri stone-pelters.

As of now, we have only one office in Kanpur, but soon we will expand to other cities across the nation.

How can one join your organisation? Will those who join it be paid?

We are not going to give any money to anybody.

Whoever loves the nation can join us.

Jammu and Kashmir is and will always be a party of India and those who share these feelings must join us.

Sena ke samman mein, Jan Sena maidan mein (To respect the army, the Jan Sena has come to the battlefield). 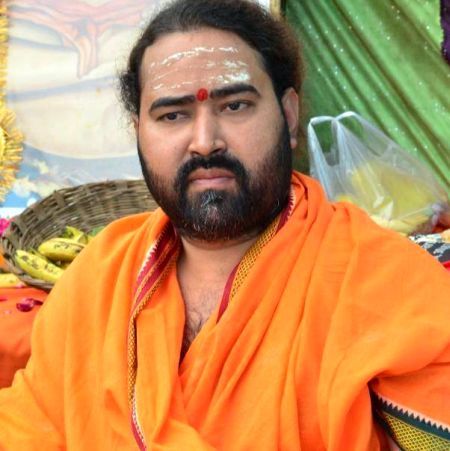 What training are you giving people who join your group?

We have made artificial statues of human beings and are training our youth how to throw stones at these statues.

There is a proper training procedure which they have to follow. At present, we are only training our youth how to pelt stones against Kashmiri stone-pelters.

We are giving this training on the ghats of the Ganga. Other kinds of training will follow later.

When does your first batch of youth leave for Kashmir?

We performed a havan before leaving.

On April 24, we wrote to the Prime Minister's Office asking for permission to go, but we did not get any reply.

We have taken dal, chana, some wood (for lighting fire) to go to Kashmir.

As we left Kanpur, the police stopped us. They did not allow us to proceed to Kashmir.

We refused to be stopped and reached Kanauj, which is the next district to Kanpur.

Why did the police stop you?

We were told that if we go to Kashmir, the central government's image will be badly affected.

I got a call from Devender Singh Bhole, the Bharatiya Janata Party's Akbarpur member of Parliament. He requested me to postpone my visit to Kashmir for a month. He told me he will hold meetings with us soon, so we stopped.

Don't you think you are taking the law into your own hands? The security forces and the police in Kashmir are tackling the stone-pelters.

Kashmir is our dev bhoomi and the pride of India. We are giving Kashmiris rice at Rs 2 kg and yet they wave the Pakistani flag at us.

Unfortunately, today even girls are taking part in protests.

We have tried to reach out to the Kashmiris for long, but no solution has come out till date.

You may recall that recently an all-party delegation had gone to Kashmir to talk to Hurriyat leaders, but they refused to meet and talk to them. IMAGE: Students have taken to stone-pelting this season. Photograph: Umar Ganie for Rediff.com

So, according to you, your Sena throwing stones at Kashmiri stone-pelters is a solution to the Kashmir issue.

These people do not understand the language of love. We have spoken with love many times, but did not succeed.

You know why? Because these stone-pelters only understand the language of violence.

Why has America never been attacked post 9/11? The answer is because they went to Abbottabad in Pakistan and killed Osama bin Laden.

Were you associated with any political party earlier?

I am a Naga sanyasi. I took sanyas at the age of 14, but after seeing the Kashmir situation I realised we should help our soldiers.

We have such a huge army of people in India, but we don't support our troops.

I feel that till we don't resettle the Kashmiri Pandits, the problem of Kashmir won't be solved.

You see how the human rights of the Kashmiri Pandits were violated in Kashmir.

Do you feel you will find a solution to the problems in Kashmir by throwing stones at the stone-pelters?

Take jallikattu. The Supreme Court had banned jallikattu, but the Tamil Nadu government brought a notification and passed the jallikattu Act.

So you see, anything is possible owing to public pressure.

If there are thousands of people from India ready to go and throw stones at Kashmiri stone-pelters, then even the Supreme Court will agree to my move.

Violence is the only answer to violence.

I am ready to die and let my body be wrapped in the Indian tricolour.

The Pakistani army is a wretched army. They beheaded our soldiers, which was a very horrible thing to do.

MORE KASHMIR FEATURES IN THE RELATED LINKS BELOW...