'We have used Arvind Kejriwal and Aam Aadmi Party as characters in the story of Indian democracy.' 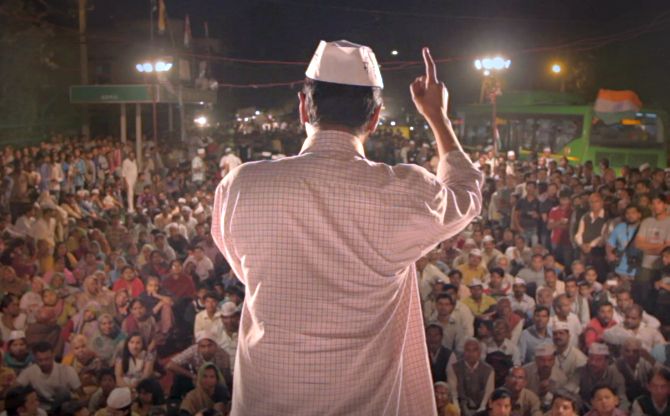 IMAGE: An Insignificant Man -- a movie made by Khushbu Ranka and Vinay Shukla -- releases in 30 theatres on November 17. Photograph: Kind courtesy: www.insignificantman.com

Khushbu Ranka and Vinay Shukla, who directed An Insignificant Man -- the documentary on the Aam Aadmi Party's journey from a fledgling political formation to an organisation which captured the imagination of the common man set to hit theatres on November 17 -- tell Rediff.com's Prasanna D Zore about the making of the film which they describe as "entertaining, funny and dramatic."

Why did you decide to make An Insignificant Man a documentary?

Khushbu: We didn't have the kind of money to launch a full-fledged film production. We are first-time film-makers and didn't have large resources backing us.

We had been experimenting with the observational form which is basically a documentary made like a fiction film. It captures real events as they are happening.

In that process because there are no interviews, no voiceovers, the experience of watching the film is like a fiction film.

For us, it was natural that the most interesting story happening around was the anti-corruption process and the follow up to that.

It was a matter of timing, resources and access, which were the big reasons why we made An Insignificant Man a documentary.

Do you think your documentary will have a ready, captive, audience even if this is about Arvind Kejriwal?

Vinay: I am absolutely sure there is an audience for the documentary that we have made.

To give you an idea where this confidence is coming from, I must tell you that while we were making it a lot of people discouraged us from making it a documentary.

At one point we ran out of money to produce the film. We decided to crowd fund.

Khushbu set up a crowd-funding Web site and we cut a trailer and put it online.

Out of these, 700 people who contributed were from India.

People donated as little as Rs 10 and the person who did that said he really didn't have the money, but he wanted such a film to be made and was helping us even with as little as that money.

When we released the trailer, we were also curious to know if people would actually go to theatres to watch the film.

So, alongside the trailer we released specially paid preview screenings in Mumbai, Delhi and Bengaluru.

All three screenings got sold out in the first 20 hours and the costs of the tickets in three cities were in the range of Rs 200 to Rs 350.

When was the last time you heard that a film's tickets were sold out 20 days in advance?

We got some very complimentary messages on social media from these buyers that they were very excited to watch the film. That is very exciting for us.

We then took another step forward.

PVR Cinemas where these three special screenings were held, when they saw the response, decided to allow anybody who wants to watch this film in a PVR theatre by simply logging into a PVR Web site and create their own screening.

If 50 per cent of the tickets sold out we would onfirm the screening.

As a result of this, we have confirmed screenings in Latur, Dehradun, Nagpur and more screenings are getting confirmed.

It is not just about the popularity of Arvind Kejriwal, but people are also thirsting for good cinema.

When you read their feedback on social media, people are saying we need films that engage us with reality. 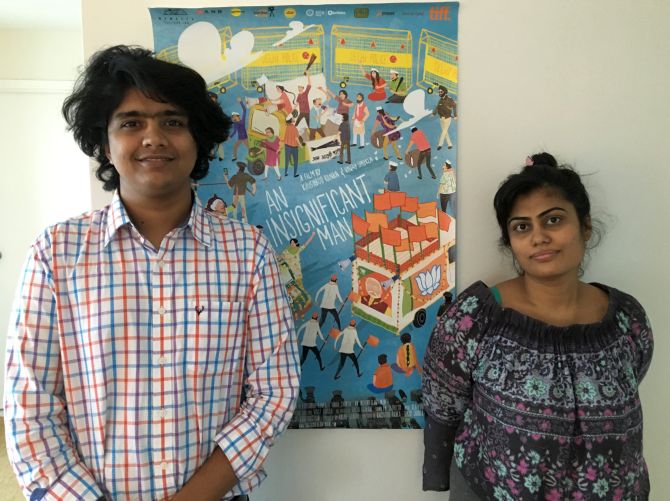 Wouldn't this be a niche audience then?

Vinay: Not really. The only way I can convince you to release this film in theatres is doing what we have done with special screenings and this is as marquee as it can get.

People, after seeing the film, are saying that An Insignificant Man is not like a traditional documentary. There are no voiceovers, no interviews.

Amit Masurkar, the director of ,strong>Newton, recently saw the film and he put out a video himself saying, 'This is not a documentary; this is a masala potboiler'.

That's the kind of engagement people are experiencing about the film's storytelling.

The Aam Aadmi Party story is full of ups and downs, twists and turns.

The focus of the film is not so much on Arvind Kejriwal or on the Aam Aadmi party specifically.

We have used Arvind Kejriwal and Aam Aadmi Party as characters in the story of Indian democracy. There have been certain ideas that Indians are very passionate about.

You can also apply the title of the film to Indian voters.

You can also apply it to any volunteer of any political party or anybody who is outside the political spectrum.

And because we have tried to craft a film which is open to interpretation and we don't use voiceovers or interviews is because we want people to come and see what is happening in front of them and think and reflect.

That is what makes for a healthier democracy.

Why then focus on Kejriwal? Why not Narendra Modi? Why not Rahul Gandhi? Why not anybody else?

Vinay: When we started at the end of 2012, there was lot of media attention around the AAP.

People were divided over whether they would be doing anything decent or sink as quickly as their rise.

So, we decided to go out there find out and make a story about them.

Khushbu: Why Kejriwal? That's because we ended up getting access to him.

While making a documentary, the most critical thing is access, where you get the most interesting version of the story.

We'd asked the BJP and Congress for permission, but we did not get their permission.

We asked a lot of people, but since neither of us have any political connections or background we did not get any.

Like the AAP, we also wanted to cover the Congress and BJP's Delhi campaign.

When we thought of this idea, Narendra Modi was the chief minister of Gujarat. Because we didn't have access to anybody else, our focus became the AAP. 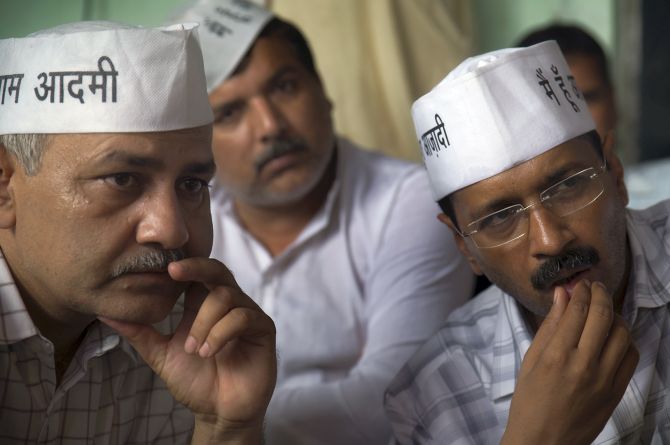 IMAGE: The film-makers believe that the AAP and Arvind Kejriwal are the newest characters in the story of India democracy. Photograph: Kind courtesy: www.insignificantman.com

How easy was it to get access to Kejriwal and cover the AAP's campaign?

Khushbu: The process was both easy and difficult. They were okay with us going and shooting, but told us that we should not expect anything from them. They said it would be our responsibility to figure out how and when we will shoot.

It was difficult for that very reason because we were a small team: it was just Vinay and I initially and we moved from Mumbai to Delhi.

It was also important to become invisible while shooting the campaign so that we could get the most interesting material.

As for Arvind Kejriwal, you will be surprised that we did not have any conversation with him during the film's shooting. The only person we met from the AAP was Manish Sisodia (currently Delhi's deputy chief minister).

People were divided over whether AAP would do anything decent or sink as quickly as their rise. So, we decided to go out there find out and make a story about them.

We would always be in a room, documenting what was happening; it worked well for us not to introduce ourselves personally too much because that would come in the way of the kind of film we wanted to make.

You will realise that while watching the film it does not really cover his personal life. It's about his political life.

We have covered their inner meetings and their arguments, but we haven't covered what he does at home.

What is the documentary about then?

Vinay: It doesn't have any interview with Arvind because that's not the form of the film. In the film, you will not see any voiceovers or any interviews with any member of the AAP.

The film's a political thriller because like when you see House of Cards one scene flows from another to another wherein by the end of it you understand what Frank Underwood is seeking and what kind of politics he is playing.

Similarly, when you see our film we are hoping to make people think deeper about the larger questions of India's democracy.

AAP was formed on the idea of decentralisation of politics and power. This idea has been talked about by various political parties over the years. India is a 70-year-old democracy where lot of parties were formed on this promise.

The AAP and Arvind Kejriwal are the newest characters in the story of India's democracy.

Our film will make you think about were AAP able to decentralise power, to what extent, what were their successes and failures because as a country it's important to take lessons from AAP's story.

It's very easy to make them into heroes or political villains, but that doesn't serve the interest of our democracy.

We hope that people will take this opportunity to reflect deeply on the AAP experience. 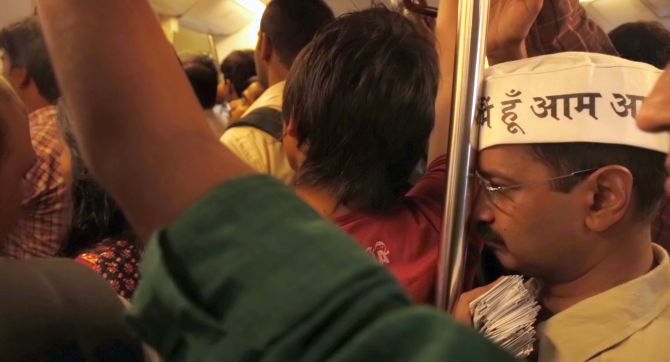 IMAGE: Khushbu, Vinay and their team were in the rooms with AAP members and Kejriwal during the Delhi election campaign. Photograph: Kind courtesy: www.insignificantman.com

How much money do you think An Insignificant Man will make?

Khushbu: If it makes good money it would be great for all of us, but let us see how the film goes with the people.

Actually, we are also learning how the entire distribution model works. It seems like a very small percentage of money actually ends up coming to the film-makers.

Our estimate is that only 15 to 20 per cent of a ticket cost comes to the film-makers.

What was the one lesson you learned while making An Insignificant Man?

Khushbu: It is difficult to make political films in India.

We hope the people will watch it with an open mind and I am sure they will enjoy it.

It is a very entertaining film. It's funny and dramatic. It's very unlike a documentary.