'The myth that the BJP has created that they are an election winning machine has been comprehensively demolished.' 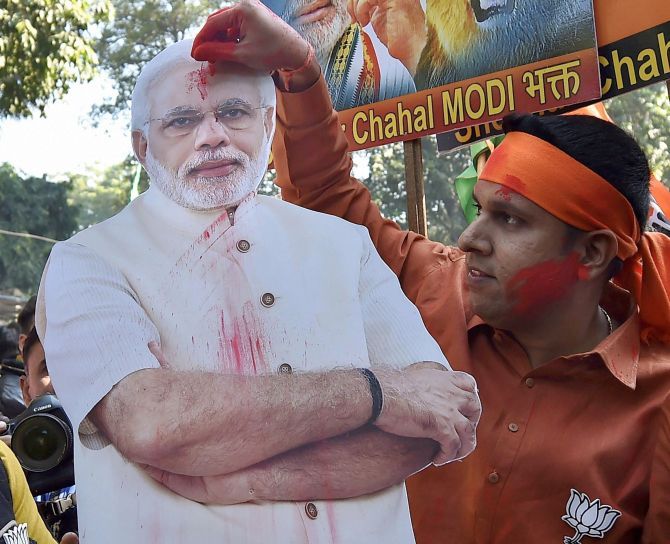 "The BJP had such arrogance that they had a majority in the government of Rajasthan and in the Government of India. They have squandered that mandate. The chief minister should resign on moral grounds," says Sachin Pilot after steering the Congress to a win in two Lok Sabha by-elections and an assembly by-election in Rajasthan.

After a month-and-a-half of campaigning and holding over 600 meetings, Pilot -- the president of the Rajasthan Pradesh Congress Committee -- says the February 1 result shows which way the winds are blowing.

In a telephone conversation with Rediff.com's Archana Masih soon after the results were declared on Thursday afternoon, Pilot says he is confident of defeating the BJP, refutes the charge that the Congress did not speak out against the Karni Sena's stand on Padmaavat and how the BJP's stance on the film has backfired.

Winning 3/3 by-elections must be a big moment for a party that was wiped out four years ago in Rajasthan.

It is a big moment for me. We did not win last time and the Vidhan Sabha elections are 6 months away.

The CM, her son, daughter-in-law, sister have been campaigning. They really made it a prestige issue, but we fought back and that's the reason we have won today. It shows which way the wind is blowing.

What are the reasons for the BJP losing ground in Rajasthan?

1. Most important is the agrarian distress faced by farmers in Rajasthan. 80 farmers have committed suicide.

2. There is huge unemployment. Young, educated people are running around for jobs and there aren't any.

3. Law and order. It has completely collapsed.

4. Price rise. Food and essential commodities have become so expensive.

People have realised that between the BJP and Congress, the Congress is more pro- welfare.

What has changed so dramatically in these three-and-a half-four years for this change to happen?

People have realised that the Congress leadership is much more dependable and have faith in the Congress.

The BJP had such arrogance that they had a majority in the government of Rajasthan and Government of India. But they have squandered that mandate.

The chief minister should resign on moral grounds. This is a complete rejection of her government and policies.

Four years into being CM, she morally really doesn't have the right to remain chief minister.

After suffering a huge loss -- the victory margin is over a lakh each. If this is the kind of rejection people have for her, morally she has no right to lead the people of Rajasthan.

What has the Congress worked at in the state? Last summer, you lost the Dholpur assembly by-election to the BJP.

Dholpur, we lost in the last two days. But it is not about just campaigning for 3 weeks, we have been on the ground for four years. Listening to people and raising the concerns that they have.

The last few days of campaigning doesn't help, you have to be on the ground consistently to win people's support and that has played off for the Congress party.

It was felt that there was a political aspect to the Karni Sena agitation, that it would have a bearing on the Rajasthan election to come, and polarise votes. Were there fewer Rajputs in these constituencies?

If you look at the results, we were winning in every assembly segment of the Lok Sabha. In both urban and rural areas.

It is not one community or caste. There is overwhelming support for the Congress across sections.

We have won in urban, rural, among all communities, religions, castes, young people, professionals -- every strata has voted for us.

One can't say it is one factor or two, it is one community or two.

Across the state, the sentiment is against the BJP and for the Congress.

Are you ready to face the challenge of facing a combined assembly and general election, the possibility for which is not being ruled out?

I don't know if consensus can be built around that or legally if it is tenable. It is something that I am not aware of, but I can tell you that the Congress party is fully prepared to face any challenge -- whether it is a separate election, combined election, today, tomorrow or day after.

We will defeat them (the BJP) at the hustings as we have defeated them in the by-polls.

The BJP will come back with greater vigour to confront the next election. Ultimately if it becomes Modi versus the rest. What are the perils of such a situation?

The myth that the BJP has created that they are an election winning machine has been comprehensively demolished by this by-election.

They put all their might -- CM, MPs, money, police, administration -- they did everything they could, but you cannot suppress the voice of the people.

You can manage it in some pockets, in some elections, in some states, but you can't put people's desire under a lid.

And no matter what they do now, in Rajasthan inki gaadi patri se utar gayii hai (the BJP train has derailed in Rajasthan).

As it get closer to the elections, do you think Congress rivalries in Rajasthan will come to the fore -- Ashok Gehlot, C P Joshi etc. How do you intend to counter this?

These are creations of the media and propaganda by the BJP. We are working as one team under the leadership of Rahul Gandhi. He has given everyone jobs to do and we are working collectively.

It is because of the combined efforts of everybody, that the Congress party is stronger.

The results are there for everyone to see and there is no scope for ambiguity.

Has Rahul Gandhi given you the freedom to run the show as you wish in Rajasthan as the Congress president in the state?

Absolutely! I think I have his confidence and I have tried to deliver.

There have been 8 by-elections in Rajasthan, 6 we have won. And we have won both Parliament seats.

It is because of the confidence and the support he gives us and me in particular that I am able to deliver.

The Congress party is bouncing back with vigour and we have a resounding comeback of the party.

Does this result strengthen your position as the chief ministerial candidate for the assembly election?

I don't apply my mind to things that far out.

My single job is to revive the party and get the party back in government.

Who gets what position is not of concern to me. This is a decision that has to be taken by the party.

Do you foresee the next election being fought on the basis of Hindutva?

People have rejected the politics of division.

People want growth, prosperity and peace. The BJP will be defeated.

Why was there a tactical Congress silence on the Karni Sena's violence and stance on Padmaavat?

Not at all. I have said that anybody who breaks the law must be dealt with in accordance with the law.

If some people's sentiments are hurt, the CM should have intervened a year ago when the film was being made and the issue would have been resolved in two days' time.

At that time there was no love for the Rajputs by the CM.

Had she mediated and resolved the matter that time, the whole controversy would not have blown to a point where we are today.

This has actually backfired for them. They took it lightly and did not interfere, now they are doing competitive politics.

They are trying to ban it in the state and not at the Centre, trying to fool the Kshatriya community.

If they really had the intention and concern about the sentiment, they should have shown it when the film was being made in Rajasthan a year ago.

But the Congress also did not put its weight behind upholding the film and opposing the Karni Sena?

Whose government is the Government of India?

Who controls the state government?

Who is in charge of the CBFC (Central Board of Film Certification)? People who are sitting in positions of power are answerable.

The Congress party is saying that nobody should break the law.

Talk with people, engage and discuss with them. But the Government of India and Rajasthan government have taken zero action.