'So a number of people are drawn in along with members of their friends' circle or their relatives.'

'A number of individuals find that they have more in common with the 'imagined community' that they discover online as opposed to their own physical community and indeed, even the majority Muslim community elsewhere.' 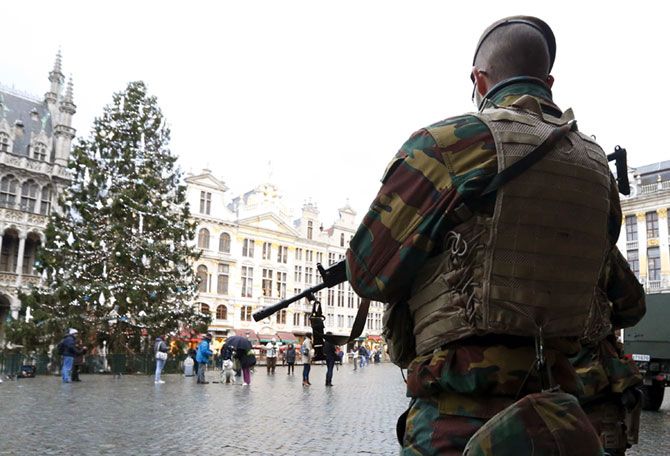 "The way airstrikes and UAVs are being used these days in various parts of the Middle East/South Asia is the equivalent of a country throwing a tantrum and hitting out every time it gets a mosquito bite," Professor Rashmi Singh, lecturer in Terrorism Studies at the University of St Andrews in Scotland, tells Archana Masih/Rediff.com in an e-mail interview.

By declaring a war on Daesh in Raqqa, has the West given to Daesh what they expected? Like Simon Jenkins wrote in the Guardian, 'By capitulating to these desires, the West has vastly increased the power of the terror -- and the likelihood of imitation.'

This is not a black and white answer. What does IS (Islamic State/Daesh) really want is a matter of debate. Given the nature of a clandestine organisation, decision making processes and motivations are hard to gauge. So what we have to base our analysis on is a series of statements and videos that are essentially staged for consumption by multiple audiences.

In short, it is worthwhile being cautious and attempting to differentiate between terrorist propaganda and the group's real aims. Having said that, we can certainly arrive at a few conclusions.

IS (Daesh) has been progressively stepping up its activities outside the area of Iraq and Syria over the past few months. Moreover, attacks on civilian populations in a Western city is obviously hoping to engender a response.

However, what is the desired response is unclear -- and indeed, it may be well out of IS's own control. Much like the 9/11 attacks which were ostensibly meant to push the United States out of the Middle East can be said to have backfired, we are not quite sure exactly what response IS is trying to engender -- and we need to be aware of this.

So is the IS trying to push Western influence and forces out of Iraq/Syria/the Middle East or is it trying to push a 'boots on the ground' policy in order to wage a fight on its own territory and its own terms?

Or indeed is this about propelling the extreme right views that are gaining ground in Europe and the US to further hem in local communities which are flowing out of these regions as refugees?

Whatever the case may be, the problem is not necessarily the 'West's' military response but:

a. The fact that France and others are calling this a 'war' (will we never learn!) and as very clearly shown and debated over the past 15 years one cannot wage a war against terror or a non-State group;

b. To frame counter-terrorism military actions as a 'war' does nothing but provide free publicity to the non-State group in question as well as some degree of legitimacy;

c. The West needs to really have a much more thoughtful response to terror attacks -- the way airstrikes and UAVs are being used these days in various parts of the Middle East/South Asia is the equivalent of a country throwing a tantrum and hitting out every time it gets a mosquito bite. There needs to be a much more concentrated, deliberate and proportionate strategy in place.

Furthermore, we must be willing to accept two disagreeable but unquestionable aspects of aerial bombings: First, they kill civilians and in numbers that makes our own liberal, democratic stance suspect and second, they can only achieve so much.

In the end, if we really expect to root out IS from these areas there will need to be boots on the ground -- if not our own, then someone else's -- but on-the-ground engagement cannot be escaped.

What do you see as the outcome of these strikes on Daesh in Raqqa?

Airstrikes have their place in CT (counter-terrorism) and COIN (counterinsurgency). They can be used to effectively weaken an enemy, target enemy infrastructure, used to access specific high-value targets and essentially immobilise and paralyse an enemy.

However, the final step needs to involve troops on the ground. In the case of Iraq and Syria, if we are planning on sending in troops then we will need to very clearly think about what we are doing and what our aims are -- something that was acutely missing from the engagement in Afghanistan.

The hardest question to ask, however, at this stage is, on the back of nearly 15 years of the so-called 'Global War on Terror' if we actually have the stomach to go into another close military encounter in the region.

So to answer your question -- the outcomes of these airstrikes will be indecisive if they are left as just airstrikes. If we manage to either put our own troops in the region or rope in the Kurds, the Iraqi forces and others to engage with IS in specific areas in the wake of these strikes, then we will need to see how that evolves over time as there are still many hurdles to overcome to regain lost territory. 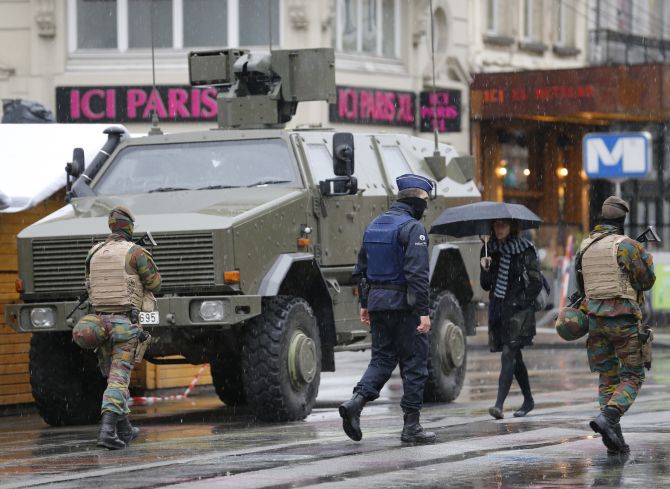 What draws Muslim youth from liberal democracies like Belgium, France etc towards Daesh?

This is not a straightforward answer and needs to place IS in the context of the global Islamist movement with its accompanying ideology that was initiated and consolidated by Al Qaeda and its allies.

Daesh or IS is essentially the latest avatar of this movement and indeed can trace its roots back to Al Qaeda in Iraq. The key component of the original Al Qaeda ideology was the logic of a broad-based violent jihad, waged by a loose social movement of loosely affiliated groups and individuals who take personal responsibility to conduct what can be best called freelance attacks.

So when we see a small proportion of young Muslim men and women from Europe move towards IS -- either physically as foreign fighters or ideologically -- we are essentially seeing the evolution of this ideology in combination with a whole host of other elements.

These other elements include: The development and proliferation of social media which has become a key medium for recruitment and radicalisation (including self-radicalisation).

A number of individuals in Europe are also deeply disenfranchised and in this sense, find that they have more in common with this 'imagined community' that they discover online as opposed to their own physical community and indeed, even the majority Muslim community elsewhere.

Add to this volatile mix the presence of real grievances -- the fact of unending civil war and conflict is seen as a deep injustice and there is a real moral stance that many individuals take against this situation.

Some of these individuals -- Muslim or not -- use peaceful means to address this grievance while others turn towards more violence tactics and terrorism.

Furthermore, there is also deep anger against the role of the 'West' in both creating some of these crises and also with its response (or lack thereof) to the same. Personality also plays a role and some individuals are more likely to use violence than others.

The deliberate use of glossy propaganda by some groups, including IS, sells the global jihad as something exciting and 'cool' and the sense of glamour and adventure also draws in some individuals.

Terrorism is also a social activity so a number of people are drawn in along with members of their friends' circle or their relatives. In short, there is a whole host of reasons that work together to both push and pull these individuals towards organisations like IS.

It is well worth remembering that when studying individuals each person has their own particular pathway into terrorism -- some aspects might overlap, but this is a very individual journey as well. IMAGE: The wreckage of Metrojet Flight 9268, the Russian airliner, which was blown up by Daesh terrorists in north Egypt. Photograph: Mohamed Abd El Ghany/Reuters

When you look at the Paris attacks and the downing of the Russian plane, what does this reveal about Daesh?

Paris only gives insight into one aspect of IS strategy. At its core, IS is about gaining and controlling territory and its military, financial and ideological tools are geared towards this broad aim.

How it intends to do this includes finding ways to co-exist and foster a pragmatic relationship with Bashar al-Assad and the Syrian regime, co-opt local tribes as well as using governance tools, social services and brute force to gain and hold territory and control populations.

The second aspect of its strategy can be traced back to the myths in Islamic tradition, whether this is the sacking of Istanbul and the battle in Rome, the re-establishment of the Caliphate in its territorial glory or the coming of the Apocalypse.

In all cases, the second is a longer term 'end' that exists in the IS worldview and some argue can be traced in terms of how it conducts its political and military strategies.

Isn't there are possibility that the terror attacks in Paris could be carried out by Daesh supporters who may have never been to Syria or fought there? That there is a constituency of young people who sympathise with their ideology and are willing to carry out jihad, drawing encouragement purely through social media?

The attacks in Paris were too sophisticated to be carried out by purely homegrown individuals without training. The use of bombs as well as the manner in which the attack was coordinated and planned suggested the presence of at least one or more individuals who had undergone training.

What Paris seems to suggest is that, like in London, there is an increasing likelihood of hybrid groups -- with local, homegrown and radicalised individuals working in tandem with those who have had direct training and battle experience in the war zones of the Middle East.

Are attacks like Paris and Mumbai, where terrorists attack soft targets, going to be the strategy of terror groups?

Terrorists have focussed upon soft targets for some time now -- well before Mumbai and Paris. This is not a new tactic -- if we just look at the violence in Kashmir and Laskhar-e-Tayiba's frontal attacks tactic that it has used for some time now then this is nothing very new.

But is this going to be the strategy of all terror groups? That question essentially sees terrorism and terrorist tactics and aims as a monolith -- and that is never going to be the case.

There may be more incidences that look like Paris, but not all groups are going to adopt this tactic.

Do you think the Paris attacks and its response by France is going to be a turning point in the war against terror?

I am not very sure what you mean by this statement -- the fact that the 'war on terror' is going on is in itself debatable. It also very easy to always point at things as turning points in history, but we never really know till we are at least 20 years down the line.

If you mean is this going to change the way the engagement with IS is going to be conducted in the coming few months or years, then yes, it will.