'Pakistan has power -- they have the power of terrorism and the reluctance of the world to act against them.' 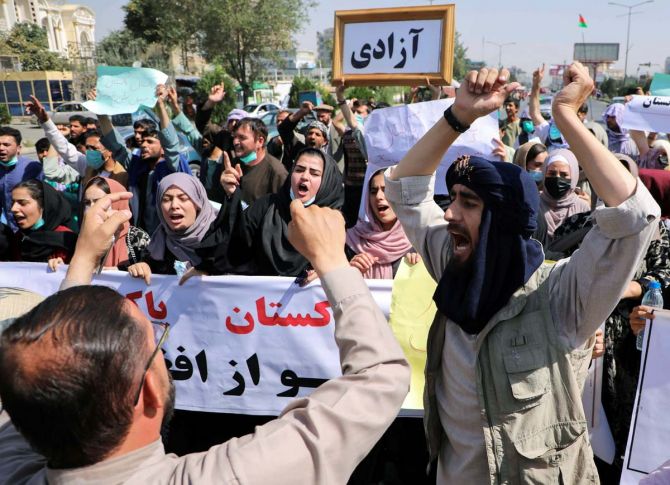 IMAGE: An anti-Pakistan protest near the Pakistan embassy in Kabul, September 7, 2021. Photograph: Reuters

"Why should we believe that the people in Kashmir will be inspired by events in Afghanistan? Don't people in Kashmir have enough grievances of their own against this regime that they need to be inspired by events in Afghanistan?" Dr Ajai Sahni, executive director, Institute for Conflict Management, asks Rediff.com Senior Contributor Rashme Sehgal.

There was a recent report about how foreign terrorists have an increased presence in Kashmir.

Sections of the media have been trying to forment hatred against Muslims for the last five years.

Where is the data for such an assertion? I have been following data on presence of foreign nationals captured and killed in J&K for the last several years.

There has been no surge during the last year.

Are you telling me that everyone is primed and ready on the day the Taliban took over and that 2,000 foreign terrorists are ready to enter J&K?

This is all hysteria and communal prejudice.

I have never seen a majority community which is so insecure as we are.

If one is making a strategic assessment, it must be on the basis of measurable indexes.

The Taliban has said we will not intervene in any conflict outside our own country.

Whether they adhere to that position in the future has to be seen. But so far, that is their stated position.

What kind of impact could anti-Muslim actions have on our internal security? Is there a possibility of some Muslims getting radicalised?

If someone welcomes the arrival of the Taliban, how is that a threat to India? When such a consolidation occurs, we will talk about it.

Why should they not rein in these forces that are causing this alienation?

Why don't you ask these questions of our MPs who make abusive statements against Muslims who are being lynched on the streets?

Is this not a security concern then?

Why should we believe that the (Indian) Muslim has got something wrong with him that he will draw the worst possible message from these recent events?

These developments do have a geo-political impact. The Russian foreign minister has said India has no place on the table where Pakistan, China and, of course, the Taliban are present.

Of course, India has no place on the table. What is our leverage?

What have we done in the last 20 years?

Have we even developed a strategy on Afghanistan?

What are our strategic interests in Afghanistan? What do we bring to the table?

Russia, China and Pakistan have committed themselves to a certain position vis a vis the Taliba and are negotiating to secure their own interests there.

What are my interests? Have these been articulated? Can I offer decisive resources to get the Taliban to say 'No, India must also be part of this group'?

What does Russia have to offer?

Russia is a powerful neighbour. It constitutes a potential partner in engineering projects which the Taliban would like to engage in.

And Russia is a country which has bombed them (Afghanistan after the then Soviet Union invaded that country in December 1979; the Soviets only abandoned their presence in Afghanistan in 1989) close to hell. They also left, but that gives them a strategic leverage.

We have given them three billion dollars over a period of 20 years. China can equal that amount in one year.

What is it that we can offer that is decisive? We are trying to come to the high table with a begging bowl.

People are invited to the high table. We are at the back of the queue.

Pakistan has also put out a begging bowl before the whole world.

Pakistan has power -- they have the power of terrorism and the reluctance of the world to act against them.

They have deployed terror with immunity. Power can be overt, covert, military, or terrorist power.

The Taliban hates Pakistan, but they still depend on them.

India is not an insignificant power.

Just because we buy a few planes from one country, a few guns from another and a few helicopters from another does not a make us a powerful nation.

State power is based on a military and industrial complex at the apex and below that is an extensive use of science and technology.

India can have the third highest GDP in the world, but our per capita will still be below most nations in the world.

We do not have the surplus required for capital investment to become a rich nation.

You cannot build a great power on falsehoods.