‘I do not think Rajiv Gandhi at that stage had any influence on his mother. Indira Gandhi relied totally on Sanjay and she looked upon him as a dependable son’

‘What really affected people and eventually Indira Gandhi was the sterilisation drive. She lost so badly in north India because of these drives’

The second and final part of veteran journalist Coomi Kapoor's, whose book The Emergency: A Personal Account was published recently, interview to Sheela Bhatt/Rediff.com about Independent India’s darkest phase.

Part 1: 'Emergency was a time when everyone was scared' 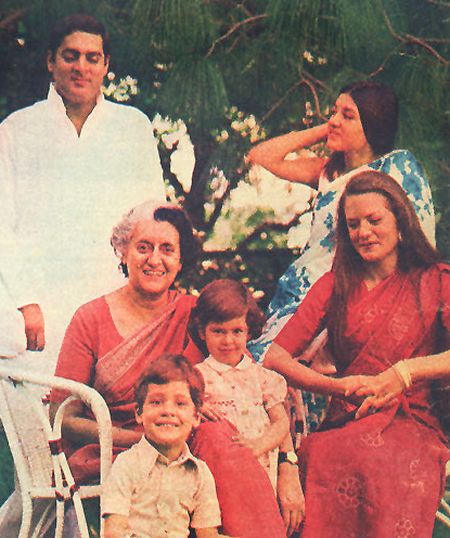 You know, clamping down on civil liberties and arresting people affected a certain number of people. Most were not affected. Surely, most were living in a state of fear. So that was one aspect of it.

But what really affected the people, and eventually Indira Gandhi, was the sterilisation drive. She lost so badly in north India because of these drives and the demolition drives which were meant to beautify areas.

Those were carried out by (Indira’s son) Sanjay Gandhi as part of his five-point programme and they were done so ruthlessly, so callously. Like, for example, people from Old Delhi were removed from their houses without any notices, without any warning. I mean from their slums, whatever they were, in the middle of the monsoon they were taken to new settlements and colonies far away from their place of work or from anywhere. This was in the pouring rain and in the new place like Khichdipur, Kalyanpuri -- all of them were settlement colonies set up by Sanjay.

I think that impacted the common people the most, because they were not affected about what was being done to the political leadership. I mean, also this sense of fear: you never knew in the Emergency if somebody raked up something against you and you could get into trouble.

You have spoken about how Sanjay Gandhi influenced Indira Gandhi. In the Sanjay Gandhi chapter you have written about many instances of the Sanjay-Indira relationship. But what exactly did Rajiv Gandhi and Sonia Gandhi do in her house? Did Sonia influence her?

I do not think Rajiv Gandhi at that stage had any influence on his mother. In my book, the chapter on Indira Gandhi mentions certain letters which have not been published, yet. I mean, they have been published by me in certain newspapers but otherwise nobody had access to them.

And those letters show that Indira Gandhi relied totally on Sanjay and she looked upon him oddly enough as a dependable son. While she was worried about Rajiv Gandhi and felt that he was not sure of his future, which was ironical because most people would have seen it the other way around.

The letters are written by Indira Gandhi to Sanjay Gandhi. Rajiv had got a feedback of the negative side of the Emergency. But Rajiv was basically an apolitical person at that stage and a pilot. Though he must have registered caution because (family friend and cultural czar) Pupul Jayakar points out in her book that on the day Indira Gandhi lost the election in 1977, Rajiv turned to Pupul and said, ‘I will never forgive Sanjay for what he has done to my mother. I had warned on several occasions that what she was doing in Emergency was going to get us into a lot of trouble.’

And what about Sonia Gandhi?

Sonia was weeping on the day Indira lost. But Sonia was for several months quietly employed in a cushy job in Maruti Technical Services Private limited (not the main car company but the private company owned by the family).

So she did not have any particular role during the Emergency?

When you look back, people who played villains eventually joined the mainstream and those who were heroes had their credibility somewhat corroded. Do you agree?

The last chapter of the book shows where the main characters of the Emergency ended up.

Many of them ended up on the opposite side of the fence from where they used to be the members of the opposition, and joined the Congress. Many of those who claimed to be such staunch followers of Sanjay Gandhi and Indira Gandhi deserted them immediately once they lost power.

Siddhartha Shankar Ray was one of those. But yet, ironically, people forget it. Rajiv Gandhi did not seem to have held it against Ray and made him governor of Punjab, despite the fact that his mother never spoke to Ray.

After the Emergency, he met her one time during the Shah Commission hearing (on the Emergency excesses) and he said superciliously, ‘I hope you are looking fit and good’. She said, ‘Thanks to you’ and never spoke to him again. 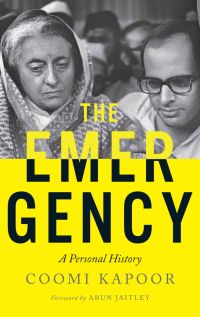 After the election of 1977, the Congress and most of those close to Indira split the party and threw her out, basically. So she formed her own party and showed that it was she who had the following. She was the one who connected with the people because the Congress party which was headed by Swaran Singh was totally sidelined.

It had a lot of MPs around 1977 but just disappeared in 1980, whereas the Indira Gandhi Congress, which people were sceptical would stay, was the one which was the real winner.

Even during the Janata period, her party won the elections in Karnataka and Andhra Pradesh. She herself won from Chikmagalur and in 1980 she came back with a thumping majority. History was re-made because of her charisma, not because of her family. She is the one who has given this aura of ‘the family’ to the Gandhis.

Do you think the family remains indispensable for the Congress party?

It seems to me that without the family the Congress does not stand for anything much. I mean, the charisma and appeal come from the great respect for this family for whatever reason.

How do you see the current government led by Narendra Modi? Does it have certain lessons to learn from this event?

Well, L K Advani has said it (smiles). I do not agree with him totally but there is no doubt that politicians always try to concentrate power in their own hands and to take control of the various wings of democracy, whether it is the media or their own parties in the government.

And while it is very difficult to have an Emergency-type situation throughout the country imposed from Delhi now, but in certain states and areas Emergency-like conditions prevail because of local influences and local leaders’ tendencies.

If Advani said it with reference to Modi, that only he can answer. Whether he means the Modi government or not, but any powerful political leader who tries to a certain degree to exercise power forcefully will find it difficult now.

Do you foresee this in the Modi government's tenure?

Yes, I see greater concentration of power, but not an Emergency emerging because it is not really feasible at the national level. Modi does not have a majority in the Rajya Sabha, even his majority in the Lok Sabha is not like Indira’s which was a two-thirds majority where she could amend the Constitution.

There is far more political dissent now than there ever was in Indira’s time. The media is far more active, the media cannot be controlled. In the days of the Emergency there were about two dozen newspapers and few publications which had to be controlled. Today there is so much, you know, the proliferation not just of publications but of television and the internet. So nothing can remain hidden, everything is out in the open. If they try to suppress one area, it will come out from some other.

You have been in journalism for more than four decades. Do you find today’s journalism more independent and fiercely guarding its value system?

As I said, the media, if you take it as a whole, there is always some section which is speaking out because it is larger, it is more vibrant, it is more diverse. So that way it upholds democratic traditions, perhaps more than in the past.

Can you share some interesting things that happened during your research, while interviewing these people again 40 years after Emergency?

Kuldeep Nayar, my editor, had written two books on the Emergency. But when I was talking to him for my book, he told me something which is not there in any book or chronicled account. He was very friendly with (then railway minister) Lalit Narayan Mishra and Mishra had actually told him, the day before he left for Samastipur where he was blown up in an explosion, that he feared for his life and that he had been removed as railway minister.

Now this is sensational news which had never come out earlier. It is a mystery who killed him. The suspicion is that it was the government of the day... some flunky of the government might have had a hand in the death because Mishra had become inconvenient to the Congress government.

But Indira Gandhi felt it was a symptomatic of the general law and order problem and the lack of it which was prevailing in the country. And as you can see from the book, it is Mishra’s death which leads to Ray writing his letter suggesting an Emergency!

Another thing, which I do not think has been properly highlighted in the past except perhaps to some extent by (socialist leader) Madhu Limaye’s account of the Emergency, is how in fact, within the Opposition during the Emergency, some of them played a dishonourable role. Charan Singh was one of those. He got out of jail early, he obviously was in touch with Indira and he wanted to break Jayaprakash Narayan’s efforts for unity.

Some of the other opposition leaders like Biju Patnaik and Ashok Mehta seemed to have gone along with compromising with Indira. George Fernandes, who was in jail at that stage, was very upset with what he felt was a backroom deal.

What was the impact on your family after the imprisonment of your husband Virendra Kapoor?

Some impact is there because Virendra is pathologically anti-Congress, which I am not. Also, he was kept in solitary confinement for a week in the Bareilly jail and that brought about some change in his personality, I feel.

Do you think young people will understand the value of freedom?

The little feedback that I have got so far -- people say that we do not know all this could have happened in India.

Image: Indira Gandhi with Rajiv and Sonia Gandhi with their children. Also in the picture is Maneka Gandhi, other son Sanjay's wife, and now Union minister.