'I challenge any of my detractors to come find me, stand in front of me and say the things they said. They won't. It is so much easier to hide behind a handle on Twitter.'

'Rarely will people try and have an intelligent, rational, balanced argument. It will immediately escalate into hate speech.' 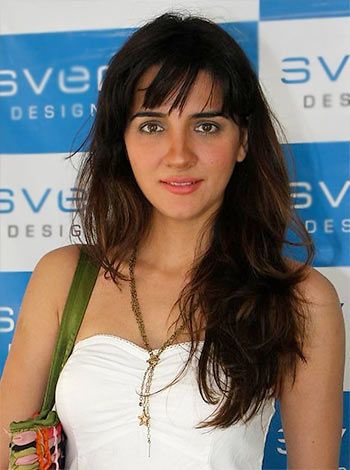 A selfie is not a device to bring about change Mr PM. Try reform. #selfieobsessedPM'

It was an opinion, expressed in 70 characters, by actress Shruti Seth (left).

That led to unimaginable abuse -- abuse that was violent, demeaning, sexually explicit. Abuse that threatened her. Abuse that targeted her husband and her little daughter, who is a little over a year old. Abuse that warned her to move out of her country into a neighbouring one because her husband, Danish Aslam, is Muslim.

They abused her profession, her identity as a mother, wife and daughter, her very existence.

Many of those who abused Seth had posted pictures, ironically with their daughters, in response to Prime Minister Narendra Modi's endorsement of the #selfiewithdaughter campaign.

Many chose to hide behind false handles as they comfortably poured out their vitriol, unaware that they had picked a wrong target.

Seth took them on. She also took on the prime minister and the country, to whom she addressed an open letter (external link).

In this interview to Savera R Someshwar/Rediff.com, she likens the abuse she faced to the eve-teasing and sexual harassment every woman faces and explains why women should never cow down.

For a country that has given the world one of its earliest women prime ministers, do you feel that nothing much has really changed for women in India?

Absolutely. We are probably the world's most hypocritical society. We have huge double standards and are extremely misogynistic.

When you posted this comment, what was the thought going on in your head? As a mother of a daughter...

I come from a place of immense privilege. I have been born and raised in Bombay. I've never had to fight for my rights. My parents gave me everything that they gave my brother.

When I posted, this the person at the back of my mind was not my daughter, but several of those other daughters in remote parts of the country where there is a huge lack as far as education is concerned, reform is concerned, broadening of thinking is concerned.

But my privilege didn't really save me from the backlash I faced.

The point is, yes, it is a great step if you think you are going to be proud of having a daughter, but what world are you giving her? If she is going to have to fight every step of the way, why have her in the first place?

The idea is it is an equal world, right? All meant to be equal, treated equally. Everything that we get must be based on merit. But, clearly, that is not the case.

Men are sent to school, women are allowed to go to school. And therein lies the hypocrisy.

That is what I was questioning.

Maybe this initiative will have a great impact on the village where it was started and it is great that the prime minister has blessed it and has asked more people to do so but, as the leader of my country, as someone who is well aware of the crimes that are perpetuated against women, I would expect a little more from that man.

I would expect him to offer something much bigger. A sarpanch of a village, I can imagine, will try and reach out to his village by asking for something a fickle as a selfie.

As the prime minister of the nation, one would expect a lot more, which is what I said. I don't see how that was wrong.

Clearly, it was not palatable at all. The fact that I demanded something of the prime minister of my own country was held against me. Why am I not allowed to demand things?

I am a woman. I have every right to ask for equal status.

Sadly, there was a huge backlash and what I found really funny again was the hypocrisy. You post a picture with your daughter and then abuse someone else's daughter. What is the point, then, of a posting selfie with your daughter?

Was the backlash primarily male or female?

Well, mostly men. But the women didn't (small laugh) have very nice things to say either. In fact, they were way harsher in their comments.

That is a mindset that needs to change. It is so deep-seated that even women accept an inferior status.

But clearly, all these idiots who lashed out didn't use their minds. They just typed away without understanding the measure or the value of their words. They see social media as a platform where they can say whatever they want with impunity.

I was appalled at the kind of rubbish that people wrote.

You can follow the prime minister. Am I stopping you? Did I tell one person please do not take a selfie?

At no point did I make any such suggestions. I made an independent statement. And you do not have the right to tell me what I can or cannot think and what I can and cannot express. It's a free country the last time I checked.

I have the freedom to express my opinion. It is my fundamental right. I don't see why I must apologise to anybody.

Did you, at any point in time, think that expressing your opinion would generate this kind of backlash?

Not really. Not this kind of backlash.

Of course, I have also been told that I am not allowed to offer any opinions on India because, you see, I am married to a Muslim and, according to them, you people should go and live in Pakistan.

Trolling has become an international sport right now, with everyone practising it and getting better at it.

The day this thing unleashed itself, I could have very easily avoided engaging and let it slide. It escalated because I replied.

You're definitely stronger than them. You just have to show that strength once. Just one time. And, trust me, they won't dare to do it again.

Do you think it's to do with the fact that you seem to be opposing something that Mr Modi has supported?

Basically, it's a question of you are a woman, what do you understand about politics? You do what you are good at, go act, cook something in the kitchen, stop trying to comment on things which are beyond your reach

I had people asking me, why didn't you say anything about ISIS!

Any person in their right mind will condemn ISIS on the basis of humanity alone, not religion.

If you can go back to 2014 to find tweets of mine where I have called someone a bitch because she provoked me, then go look up my timeline, read, assess, process and then speak on my timeline.

And again, I may never say anything about ISIS. It still does not stop me from talking about my own country.

At this point, very honestly, in my opinion, let everyone's energies go towards figuring out what's going on with the Vyapam scam because I think that needs immediate attention.

Clearly, human life has no value in this country today. No one seems to be bothered by it. It's very surprising.

You know, we'll start treating women with a certain kind of status when we start appreciating human life. We clearly don't care about it.

People can just drop dead like flies and no one will bother even investigating. That's very scary. It's a very scary future. And a very scary present as well.

Would you have faced this kind of extreme reaction if it were not for the fact that people misuse the anonymity one can have online?

Of course not. None of those people have the gall to stand in front of me and have an intelligent discussion. Not one of them.

I challenge any of my detractors to come find me, stand in front of me and say the things they said. They won't. It is so much easier to hide behind a handle on Twitter.

Very honestly, the one thing I would urge the country to do is to raise better sons. Women are responsible for the kind of hatred that men spew on other women.

I'm sorry, it does not work with me. I come from a family with equal status. I will not stand for your bullshit.

I'll say it a thousand times; I think #selfiewithdaughter is an eyewash. Go change your thinking first, then we'll talk about taking selfies with whoever it is you'd like to take a selfie with.

Make it mandatory in this country for every family to educate their girls. I know there is the Beti Bachao Beti Padhao scheme, but when I say mandatory, I mean make it the law.

Make crimes against a woman punishable to the maximum extent of the law. Make the judicial process faster. Let people be taken to task for even the minutest abuse against a female in this country.

But all this requires too much time and effort and we don't have that kind of time you see. It's too much work. It is so much easier to just ask people to post selfies because it takes a load off your shoulders.

Since now you put it (#selfiewithdaughter) in the public domain, people are feeling very included in the governance. I'm sorry that is high level bullshit.

If you really want to do something, use your power for the right thing.

Do you believe there is no tolerance for debate under the new government?

I don't think they'll really clamp down on people's opinions that obviously but yes, there is always a sense of fear that should I should I post this online? Do I really want to deal with the backlash? Rarely will people try and have an intelligent, rational, balanced argument. It will immediately escalate into hate speech.

They kind of bully you out of dialogue, if you know what I mean. They won't even let you go there. They'll just say 'Oh you're a bitch, you're this, you're a Muslim, you're married to one, you're an actress...'

I'm already so exhausted that I won't even bother engaging so they kind of achieve whatever it is they set out to do in the first place.

But there hasn't been an open threat where one would think twice before saying oh okay, I should not say anything because I can be put behind bars or I can be punished by the government. We haven't reached that point thankfully, there is still some democracy left.

At the same time, there are definitely these bullies who come in and make the conversation so unpleasant that you'll back down. I've been noticing that.

You have a young daughter. How would you like to see India change for her?

To put it very simply, here's something I want the prime minister to do for me and for all the women in this country.

We all have this tiny little sense of fear. Make that go away.

Let us be fearless the way men are in this country. Let us not have to always speak louder so that we are heard.