'The Congress can exist without (someone from) the Nehru-Gandhi family being its president.' 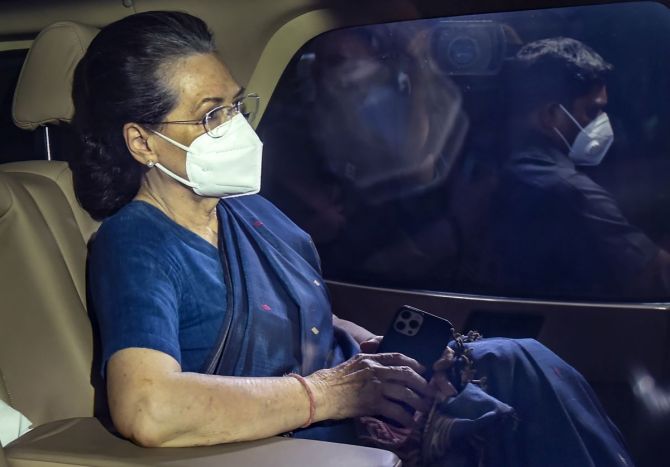 Reposing 'full faith' in her leadership, the Congress Working Committee on Sunday unanimously decided that the party's interim president Sonia Gandhi should continue till organisational polls after she expressed readiness to 'make any and every sacrifice' in the party's interest.

After its drubbing in the five state polls, calls for large-scale reforms to revive the Congress are strengthening within and without the party.

In part 2 of his interview with Syed Firdaus Ashraf/Rediff.com, veteran Congress watcher and author of 24 Akbar Road and Sonia - A Biography Rasheed Kidwai says, "Sonia Gandhi should resign. Create a crisis and let the party decide."

What must Sonia Gandhi do now?

From an academic point of view, the Gandhis have done a lot for the Congress. They feel it is their duty to bring back those good old days and revive the party.

When Sonia Gandhi joined politics after seven years of Rajiv Gandhi's death, she told veteran journalist Shekhar Gupta that each time she passes by the portraits of Jawaharlal Nehru, Indira Gandhi and Rajiv Gandhi, she feels accountable for the Congress party.

She did a lot for the Congress by bringing them back to power in 2004 and (ensuring a victory again) in 2009. But now, the Gandhis as the head of the Congress are seen as a liability.

The Congress can exist without (someone from) the Nehru-Gandhi family being its president.

They can contribute immensely as campaigners and leaders and let someone else take over.

Sonia Gandhi was the star campaigner in the five states (that went to polls), but she did not step out of her house.

She should resign. Create a crisis and let the party decide.

The constitution of the Congress party says that if the president resigns, the All India Congress Committee should elect a new leader.

Let these 1,300 people decide whom they want to elect. Be it Chhattisgarh Chief Minister Bhupesh Baghel, Rajasthan CM Ashok Gehlot or senior party MP Shashi Tharoor or Sachin Pilot or anyone else.

It is quite patronising to say that 'hamarey bagair party bikhar jayegi' (the party will split without us). Let the stakeholders decide.

How many elections has the Congress lost after 2014?

They lost many elections, but they also won some.

They have to go back to basics as they did in 2018 and won Rajasthan, Chhattisgarh and Madhya Pradesh. They gave a very tough fight to the Bharatiya Janata Party in the last Gujarat assembly elections too.

In the coming elections of Karnataka and Himachal Pradesh, the Congress has a good chance to win.

They could not win Uttarakhand this time which as baffling as their loss in Punjab. But, then, there have been so many times when (leaders like) J Jayalalithaa and M Karunanidhi lost, and yet they came back to power.

Look at Chandrababu Naidu. He too made a comeback. Political leaders must not be looked only through the prism of victory or defeat. Look at the whole package that they offer.

Their loss in Uttarakhand even after the BJP replacing two non-performing chief ministers in five years was indeed very surprising.

Look at the kind of managers the Congress appointed in Uttarakhand.

They sent Devendra Yadav, a former MLA from Delhi. Now, Delhi has not seen a single Congress MLA since 2015.

There are many states where the Congress's tally today is zero: Andhra Pradesh, West Bengal, Delhi.

In Uttar Pradesh they have only two MLAs out of 403. This is very frightening.

And where they are in government, like in Tamil Nadu, Maharashtra or Jharkhand with regional parties like the Dravida Munnetra Kazhagam, the Shiv Sena or the Jharkhand Mukti Morcha, they are not on the same ideological page with these parties.

Alliances are formed on individual strengths. The DMK can just walk away from the alliance one fine day by joining hands with any other regional party like the Trinamool Congress or, for that matter, even the Aam Aadmi Party to make a group because these parties want to make their presence felt in Delhi.

Even (former chief minister) Harish Rawat could not win in Uttarakhand, why?

He was employed in Punjab for too long to solve the internal party crisis.

He had to beg and plead with the party high command, requesting them to send him back to his home state as elections were nearing.

This resulted in the Congress losing both Uttarakhand and Punjab.

The Congress must do brainstorming to decide whether projecting a chief ministerial candidate is beneficial or not.

Why do Rahul or Sonia get to decide if the Congress needs a CM face or not?

Today, the Congress is not a serious challenge in states that have more than 40 MLAs. And wherever they are in larger states, they are in alliance with parties like the DMK. But those alliances are very fragile.

G-23 leaders want to bargain (with the party high command). Like in the old days, Dadabhai Naoroji's Congress had a three-point formula -- to plead, petition and pray with the British. That will not work.

They must spell out (their strategy clearly) by saying that these are the three points on which the party needs to work right now, which they are not doing.

The G-23 has seasoned politicians like Ghulam Nabi Azad and Anand Sharma. But they have become very comfortable (in their shells).

You had mentioned that the Congress must replace Adhir Ranjan Choudhry with Shashi Tharoor as its leader in the Lok Sabha. Why?

My point is that every political party tries to put their best foot forward and that's how things should be.

In the Lok Sabha, the Congress has 52 members. If Shashi Tharoor cannot match Prime Minister Narendra Modi, at least he can match other ministers in giving it back.

Similarly, in the Rajya Sabha too, why insist on Mallikarjun Kharge? He was previously the leader in Lok Sabha. I am sure he has a glorious (standing). But election management has become a dire necessity. It must be a 24x7 job.

If Prashant Kishor can do it, then why not the Congress party?

The Congress could not get him in the party. They spent so much money in the UP elections, for what? Two seats?

It is high time they constituted a professional body internally that can oversee election management.

Do you feel the AAP can replace the Congress at the national level?

Political groups like the AAP and the TMC will pose a lot of problems for the Congress because they have national ambitions.

They will keep on going in states like Rajasthan, Karnataka, Himachal Pradesh, Gujarat and Chhattisgarh which will cut the Congress (votes) badly.

It is a loser's argument. The Congress is now fully in power in only two states: Rajasthan and Chhattisgarh.

In other states, it is a part of coalition governments.

And, as I always say, there is no silver medal in politics.

hat is this love-hate relationship between the Gandhis and Prashant Kishor? Why doesn't he join them?

The Gandhis see him as a useful man, but they are not able to push (him enough). If you want me in your party and I know I am useful to you, then you will move mountains to get me.

The Gandhis are not doing that.