'State BJP leaders do not expect Rajinikanth to join the BJP and go on to lead the party in the assembly polls, even if he entered direct politics as declared. Yet, they do look at the greater possibility of a Rajini-led regional party opting for the BJP as an alliance partner, maybe along with other regional and sub-regional parties,' says N Sathiya Moorthy. 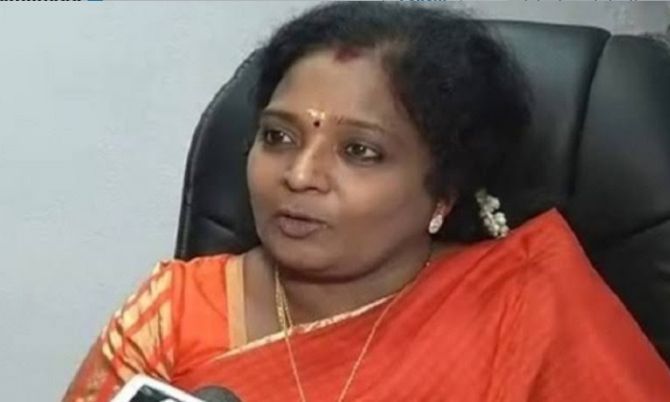 IMAGE: Tamizhisai Soundararajan has been sent to Telangana as governor. Photograph: Courtesy, BJP4TamilNadu on Twitter.

In the normal circumstances, the appointment of Tamil Nadu BJP chief, Tamizhisai Soundararajan as the governor of Telangana should have been seen only as ‘kicking up’ the failed state boss, for a better leader to lead the state party for assembly polls that are due in May 2021.

Not in this case, though.

Even as a long list of probable candidates is doing the rounds in the local media, starting with the social media, speculation is equally rife if the party would post a ‘strong’ or ‘weak’ state chief ahead of the assembly polls.

A ‘weak’ leader would imply that the party is already settled on scouting for allies for the assembly polls. An ‘aggressive’ leader, as Tamizhisai was, could mean that the party may be keeping the option of going it alone still open.

It does not mean that under an ‘aggressive’ state BJP president, the party would go it alone. Even in the case of Tamizhisai Soundararajan, she was aggressive and outright belligerent towards both Dravidian majors, yet ahead of the Lok Sabha polls this year, the national leadership settled for an AIADMK-led alliance.

Yet, it could be that while taking ‘national priorities’ into consideration for LS polls, the national leadership of the party may not be averse for the BJP to go it alone in the assembly polls -- especially if it does not find a suitable ally, who would at the very least accommodate them in the post-poll government, if it came to that.

It is against this background, sections within the state party too are talking about the possibility of the BJP waiting for superstar Rajinikanth making up his mind about entering direct politics ahead of assembly polls, as he had promised his fans on new year's eve, 2017.

State BJP leaders too do not expect Rajinikanth to join the BJP and go on to lead the party in the assembly polls, even if he entered direct politics, as declared. Yet, they do look at the greater possibility of a Rajini-led regional party opting for the BJP as an alliance partner, maybe along with other regional and sub-regional parties.

It is also here that some sections within the state BJP say that the party should go in for another ‘aggressive’ state unit president, who is at the same time not arrogant or ‘abusive’, especially vis-a-vis the Dravidian majors and their socio-political icons like ‘Periyar’ E V Ramaswami Naicker, DMK founder C N Annadurai and late party president, M Karunanidhi.

The reference, of course, is to the likes of H Raja, chartered accountant turned politician, who lost to Karthi Chidambaram, son of jailed former Union finance minister P Chidamabaram of the rival Congress, in native Sivaganga constituency.

According to them, most voters in the state vote for the Dravidian parties, not for their ‘anti-god’ or ‘anti-Brahmin’ ideology, as perceived by some in ‘distant’ Delhi. Instead, it is for the socio-economic programmes that they have launched while in power, or whatever they promise ahead of elections. Those programmes are as effective as they are imaginary.

As they point out, the BJP needed to expand its voter-base in the state, to be able to add value even to a prospective ally, including Rajinikanth with his proven charisma and freshness to the politico-electoral field (if he kept his promise, that is). While the ‘anti-Dravidian’ ideological voters are anyway in the BJP’s kitty, additional aggressiveness would not pay. It could only cost the party more votes, instead.

As evidence, they refer to the high margin of defeat of then Union minister Pon Radhakrishnan in native Kanyakumari constituency in the LS polls. Radhakrishnan lost to Congress candidate H Vasanthakumar by 2.6-lakh votes, a record margin for the constituency.

The last high score in the constituency, then known as ‘Nagercoil’, was by late K Kamaraj, when he contested an LS by-poll, way back in 1969 after losing the native Virudunagar assembly seat in the historic 1967 elections that swept the united DMK to power for the first time -- and swept away the ruling Conress out, as good as forever.

In this context, some BJP leaders also do not rule out the possibility of the BJP-ruled Centre trying to bring around the anti-Hindutva DMK around, ahead of the assembly polls, the same way it had done in the case of the ambivalent ruling AIADMK rival ahead of the LS elections.

At a function in native Coimbatore district, former state BJP president and one-term parliamentarian, C P Radhakrishnan, referred positively to  DMK president M K Stalin. An aspirant for the same post since Tamizhisai’s elevation, Radhakrishnan said that like his late father M Karunanidhi, Stalin too has worked hard and ‘finished off’ the BJP (in the LS polls this year). “He has inspired us to work harder,” the BJP leader said.

Soft-peddling Radhakrishnan’s observations, Stalin has since said that the DMK did not ‘finish off’ the BJP. “We have only defeated the party,” he said. If it was a loaded statement, long ahead of the assembly polls, no clarification has been sought, or given, at least for now.

On a future poll alliance for the BJP in Tamil Nadu, a lot, they concede, would depend on what Rajinikanth would do, or how popular or unpopular the AIADMK state government would become -- compared to the LS poll season.

Silently, they also do not rule out the possibilities of the BJP at the Centre becoming equally more popular or unpopular, given the likes of ‘Kashmir issue’ on the one hand and/or the state of the economy on the other.

Whatever that be, there is unanimity among Tamil Nadu BJP leaders that as governor, Tamizhisai Soundararajan would prove to be a thorn in the flesh of Telangana’s ruling TRS and Chief Minister K Chandrashekara Rao. Their comparison, of course, is to that of Lt Governor Kiran Bedi in the Congress-ruled Union territory of Puducherry.

At the same time, there is the equal possibility of the new governor for Telangana, either using her good offices for the betterment of inter-state relations between the two. Alternatively, on sensitive issues that might crop up between the two, if any, her presence in a state capital not far away from native state, though separated by Andhra Pradesh, post-separation, could become a burden for her and also her native Tamil Nadu.

In the meantime, Tamizhisai has also filed an election petition against DMK victor, Kanimozhi Karunanidhi, in the Lok Sabha polls from southern Thoothukudy constituency. Neither of them belong to the constituency, and thanks possibly to the ‘anti-Sterlite protests’ and police-firing in which 13 persons were killed, Kanimozhi won the seat by a huge, 3.47-lakh vote margin --  like all but one of the 38 victors in a total of 39 constituencies in the state -- all 38 of them from the DMK-led alliance, of which the anti-BJP Congress was very much a part.