'Citizens have given money to PM-CARES, so they have the right to know what has happened to their money.' 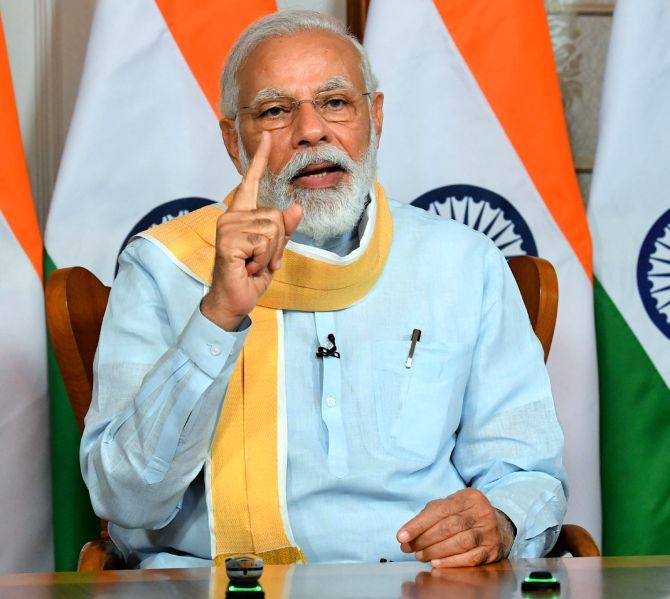 Right To Information activist Anil Galgali has filed four RTI applications with the prime minister's office to find out details of the Prime Minister's Citizen Assistance and Relief in Emergency Situations, or PM-CARES, fund.

However, the PMO refused to share any details about the trust with him.

The PM-CARES fund, a public charitable trust, was created by the government to meet any eventuality arising out of the COVID-19 pandemic, and has been receiving a flood of contributions from all over.

"Answer these simple questions: How much money came, how much was spent and how much is the balance? In three columns the issue is over even if they don't give details of the contributors' names," Galgali tells Rediff.com's Syed Firdaus Ashraf.

What information did you seek in your RTI plea?

The PM-CARES fund is getting huge amounts of money.

I wanted to find out where it was coming from and how that money was being utilised.

1. Details of contributions made by political parties to PM-Cares Fund or whether they donated or not

3. How much money was spent on COVID-19 as there are shortages of ventilators and oxygen in many states?

4. Which states got how much money, as every state is saying that they were not getting sufficient money from PM-CARES?

What did the government tell you in response?

I got an answer stating that the PM-CARES fund is not a public authority under the ambit of Section 2(h) of the RTI Act 2005 (external link).

I was told however, that relevant information in respect to the PM-CARES fund may be seen on the Web site pmcares.gov.in.

When I visited the Web site there was no information (about how much funds were collected and spent).

But the PM-CARES fund is in the PMO!

If this is a non-government organisation and registered under charity rules, then they have to submit accounts and its accounts have to be audited and disclosed.

That is the rule.

Even a Ganpati mandal has to give its audited report and submit accounts to the government as per the rule.

Now the PM-CARES fund must also disclose all its accounts under the RTI Act 2005, section 4 (external link).

They must disclose all account details on their own.

If they do that, no one will file an RTI plea.

It is said PM-CARES does not come under the purview of Articles 267 (formation of contingency fund) and 266(2) which says all moneys received by the government shall be entitled to the public account of India. How did that happen?

They gave their own definition.

If the PM-CARES Fund had been told in advance that ordinary citizens of India will not be told where and how it will spend their money, no one would have contributed to it.

The PM should have clarified this on March 28 when he announced the fund.

The PMO is under the purview of the RTI Act.

So whatever work that is going on in the prime minister's office also falls under the ambit of the RTI.

Citizens have given money to PM-CARES, so they have the right to know what has happened to their money. Isn't it?

other RTI activists too had asked for details of PM-CARES and they too were told that since it was not a public entity, there was no need to disclose details.

If that is the case, then why do they keep this trust in the PMO?

Don't keep PM-CARES office in the PMO then.

Let them make another trust and rename it as India Cares fund.

Prime Minister Modi said in an interview that any individual can ask him any questions.

So we are just asking him details of the PM-CARES fund, and he must disclose them.

You go to the PM-CARES fund Web site and you will see the PM's photos all over.

There are no details of the fund.

Now if you say that it does not come under RTI purview, why are you putting the PM's photographs on that site?

Why do you think the government is not being transparent about PM-CARES?

In Maharashtra, when the Congress was in power, the CM's relief fund was not under the ambit of the RTI.

It was RTI activist Shailesh Gandhi who pursued the matter non-stop and got the Maharashtra CM's relief fund under RTI purview.

They were not giving details, but Shailesh Gandhi followed up the case and therefore it came under RTI.

Isn't it surprising that in the same country we have the CM's relief fund under the RTI's ambit, but the PM-CARES Fund cannot come under its purview?

Whenever a new change comes, people do not accept it.

We have to put pressure on the PM CARES Fund to bring it under RTI because you do not get this kind of information easily.

Even members of Parliament are not raising questions on the PM-CARES Fund.

The Supreme Court in April refused to entertain a plea asking for details of the PM-CARES Fund.

The Supreme Court cannot make an overall perception unless it has documents and case study.

The Bombay high court has now sent a notice to the Centre to file an affidavit about PM-CARES.

Therefore, I say, without wasting so much money and effort they should disclose the PM-CARES Fund details under the RTI Act.

Earlier, they never used to disclose details of the prime minister's foreign travel costs, but after RTI pleas were filed and they started disclosing the details, no one files an RTI on this issue anymore.

If people are raising questions about PM-CARES, then the PMO must disclose the details and the issue will be closed.

There is no personal agenda in this.

Does anybody have any idea of how much money the PM-CARES Fund has received or spent so far?

Dainik Bhaskar got these details (external link) by collating all the media reports after March 28.

They wrote in a report that government agencies have contributed Rs 5,349 crore.

This is according to Dainik Bhaskar.

What are your misgivings about the PM-CARES Fund?

PM Modi has himself said at public rallies that anyone can ask him questions as this is not a government where things were not transparent.

If the PM-CARES fund falls short of money, then I am sure more money will be given to it if it is transparent.

Another query that I had put was that so many Maharashtra BJP (Bharatiya Janata Party) MLAs donated and contributed to the PM-CARES Fund.

They gave that money from their salaries, which is the public's money.

So, we the public have a right to know all these details.

Answer these simple questions: How much money came, how much was spent and how much is the balance.

In three columns the issue is over even if they don't give details like names.

We saw migrant workers suffering during the lockdown. Do you feel that the PM-CARES Fund was not utilised properly then?

In Maharashtra, I had filed an RTI plea and got the details of the CM's relief fund.

The rest Rs 319 crore was spent on migrants.

It is okay, they can spend (the money) but they could have formed a different fund for that.

People gave you money for COVID-19 and you spent it on migrants.

People gave the money because they wanted oxygen, ventilators and extra beds for COVID-19 patients.