'Since Kashmir is not burning, the Pakistanis are very uncomfortable'

'What has changed is the desperation of Pakistan proxies and the separatists in their failure to foment violence and civilian casualties in Kashmir.' 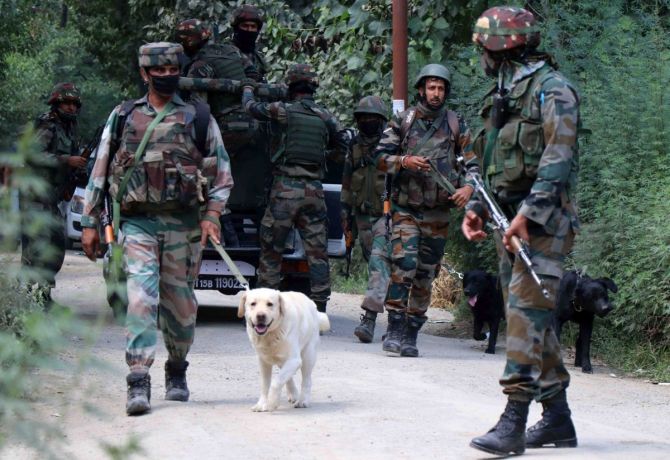 IMAGE: Indian Army soldiers conduct a search operation during an encounter in which two militants were killed and a soldier was injured at Ranbirgarh Lawapora in Srinagar, July 25, 2020. Photograph: Umar Ganie for Rediff.com

Lieutenant General B S Raju, AVSM, YSM was commissioned into 11 JAT on December 15, 1984. An alumnus of the National Defence Academy, the general attended the NDC course at the Royal College of Defence Studies, UK, and the Master's programme in counter terrorism, at the Naval Postgraduate School, Monterey, USA.

General Raju commanded a rifle company on Soltoro Ridge with 11 JAT. He commanded 15 JAT during Operation Parakaram in the semi desert sector and later at Tut Mari Gali, in Jammu and Kashmir. He commanded the Uri Brigade on the Line of Control and was later the General Officer Commanding of CI Force Victor in south Kashmir.

The general presently commands the Chinar Corps in Kashmir.

"Pakistan has a single minded focus on interference and poisoning the minds of the people of J&K. To further this, it has paid proxies that peddle its destructive narratives... This poisoning of young impressionable minds with the constant drumming of propaganda and false narratives leads the youth to go astray and pick up a weapon," General Raju tells Senior Rediff.com Contributor Air Commodore Nitin Sathe (retd). The first of a multi-part interview:

It is said that there are 200 to 250 militants still active in the Kashmir valley. Of these, how many are foreigners and how many are local boys who have been recruited?

Estimates regarding active militants vary; our present estimates of terrorists in Kashmir are less than 200, down due to relentless successful operations.

This is largely a result of good control over infiltration, killing of existing cadres and reduced recruitment.

While in 2019, till June, 83 youth had joined terrorism, the figure has reduced to 70 in the current year.

This recruitment of local youth into terror in 2019 was 117, which has been comparatively less as compared to figures of 2018 at 214.

These are clear indicators of the decline in terror influence in J&K. We wish that this should drop further, and finally cease altogether. 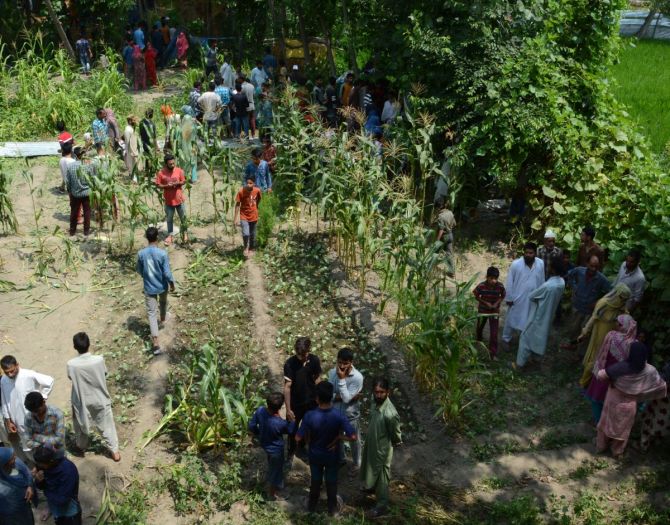 IMAGE: Kashmiris at the site where the two militants were killed and an Indian soldier was injured during an encounter at Ranbirgarh Lawapora in Srinagar, July 25, 2020. Photograph: Umar Ganie for Rediff.com

Stripping of special status has led to militarisation of youth in South Kashmir.
What exactly has been the motivation for the youth to join the militant camps and what do you attribute the reasons for the same?
What can be done to reverse this trend in the current circumstances?
What have been the innovative tactics/ improvisations that have been employed to control militancy in your AoR (Area of Responsibility)?

South Kashmir has been a hub under the influence of terror even before my last tenure as GOC Victor Force.

The abrogation of Article 370 can in no way said to have led to 'militarisation of youth in South Kashmir'.

To the contrary in the last one year, all parameters of security have improved in the Kashmir valley including South Kashmir.

What needs to be understood about the principal instability factor is that Pakistan has a single minded focus on interference and poisoning the minds of the people of J&K.

To further this, it has paid proxies that peddle its destructive narratives.

Pakistan has been using social and religious radicalisation as a tool to fuel separatism.

This poisoning of young impressionable minds with the constant drumming of propaganda and false narratives leads the youth to go astray and pick up a weapon.

If this issue of Pakistan interference is addressed then the Awaam of J&K will have opportunity to focus on the aspirations of the local people, and work to address the daily challenges while moving towards progress and development.

Local terror recruitment is one of our primary concerns.

Our efforts are aimed at weaning the youth away from terror with proactive steps being taken to identify and counsel vulnerable youth.

We are working to firstly prevent local youth from joining terrorism and secondly to facilitate surrender from those who have joined terror tanzeems.

In all operations, we extend every opportunity to local terrorists to give up arms and return to the mainstream.

During most encounters we halt operations and involve the parents or society elders to urge the trapped local terrorist to surrender.

We have been successful on some occasions and hope that such numbers increase.

The family and the misguided youth are assured of State help in surrender, security from terror retribution and help in rehabilitation.

We as a nation and society have to create opportunities for successful rehabilitation of such surrendered terrorists.

To make surrender more attractive in current environment we have given our suggestions for updating the existing surrender policy to the UT (Union Territory) government and it is under consideration.

We look at the Awaam and Kashmiri society to constructively engage with the youth to eradicate the false notions spread by Pakistani and separatist propaganda. You took over this prestigious command in February, just after the abrogation of Article 370 and the removal of special status to the state. With the numerous tenures that you have had in the Kashir valley, what do you think has changed in the entire AoR?

On the kinetic front, over the past year, the leadership of all terrorist tanzeems has been effectively targeted and eliminated.

This and the recent successes in the Counter Terrorist operations has now left a definite leadership void.

Infiltration has also reduced to one of the lowest levels in years.

In addition, measures to neutralise the OGW (over the ground workers who aid the terrorists) network is a concurrent effort.

These signs show a marked decline in terror influence in J&K.

We hope to keep up the pressure.

What has changed is the desperation of Pakistan proxies and the separatists in their failure to foment violence and civilian casualties in Kashmir.

Since Kashmir is not burning, the Pakistanis are very uncomfortable.

The Awaam is today looking towards a future of peace, stability, opportunities and development.

They are looking forward to see the impact of the change in administration.

The worries amongst the population are mostly fed by the Pakistani propaganda which is being proactively exposed.

There have been numerous development initiatives fructifying on ground in the recent months, this has to continue for the Awaam to feel reassured and negate inimical propaganda.

The COVID-19 challenge has slowed things, but that is a part of the global challenge that the administration and the Awaam are fighting jointly.

We as the security forces are committed to creating an environment of security where administrative, political and civilian activities can happen without fear of the gun.

It is a work in progress.

Tell us how you are synergising and strengthening the intelligence mechanism in the valley so that timely and accurate intelligence is available to the troops on ground.

Synergy in operations between various Security Forces and the intelligence agencies has been one of the primary reasons of success in the recent Counter Terror and Counter Infiltration efforts.

We have processes in place for the precise coordination in information sharing and conduct of operations. Our last security review meeting at the apex level was on August 2, 2020.

The success in operations both on the Line of Control and the hinterland rely on a combination of use of technology, Human Intelligence and good tactical skills. We have the top of the line technology for intelligence which we continuously keep upgrading.

The HUMINT is also good as the Awaam is wise to see for themselves the fallacy of the lies propagated.

Does the additional requirement of almost 50,000 troops in Ladakh impact the availability of troops to task for internal security duties? It is said that the situation in Ladakh will have severe implications on the security situation in the valley.

In military terms, in J&K we are dealing with the Pakistan border in Kashmir. We have sufficient highly trained and well equipped combat forces to deal with any exigency.

I can assure you that our combat readiness for any contingency is very high.

14 Corps in Ladakh is mandated and equipped to handle the situation both on the Chinese and Pakistani front opposite them. The overall conduct under Northern Command has plans to cater for all contingencies.