'India would not like to see Pakistani domination and tutelage of Afghanistan against Indian security and economic interests.' 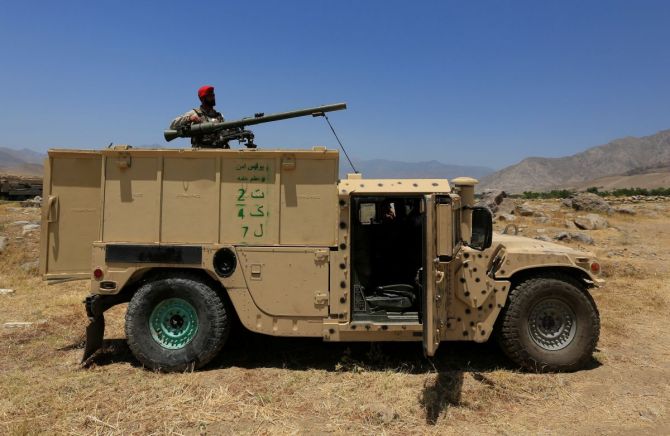 "The Taliban have joined hands with the Pakistani military establishment, made a deal with the US not to attack their troops as they withdraw, but continue to attack soft Afghan civilian and military targets, and have reached out to Russia, China and the West to achieve their goal," notes Gautam Mukhopadhaya, India's former ambassador in Afghanistan.

The diplomat -- a Senior Visiting Fellow at the New Delhi-based Centre for Policy Research -- reopened the Indian embassy in Kabul after the fall of the Taliban in 2001.

With the withdrawal of American troops by August 31 and the Taliban making huge advances -- is it back to the old days? Is it likely that the Taliban is taking over Afghanistan once again?

That is their objective, whether or not they do it on the negotiating table or by force, or both, with the full backing of Pakistan.

The Taliban claim that they are a 'nationalist' force fighting foreign occupation. In fact, they are fighting the idea of a modern progressive Afghanistan.

They have joined hands with the Pakistani military establishment, made a deal with the US not to attack their troops as they withdraw, but continue to attack soft Afghan civilian and military targets, and have reached out to Russia, China and the West to achieve their goal.

What kind of a country will the Americans be leaving behind on August 31?

The US is leaving behind a country that has accomplished many gains in terms of social and economic development, civil, political and human rights including women's rights, and media freedoms, but also many weaknesses in governance, security and nation-building for which both the US and the Afghan governments are to blame.

The root cause of these weaknesses is that the US commitment to Afghanistan was limited to a counter-terrorist role. It was never a strategic interest in Afghanistan's future.

We are seeing the consequences of this in an Afghan State heavily dependent on NATO and Western assistance, and a special forces army that can counter terrorist attacks but not hold territory, effectively betraying its own investment in blood and treasure.

The net result is that the US intervention has benefited and ceded space to its strategic rivals, not its allies in Afghanistan and the region. 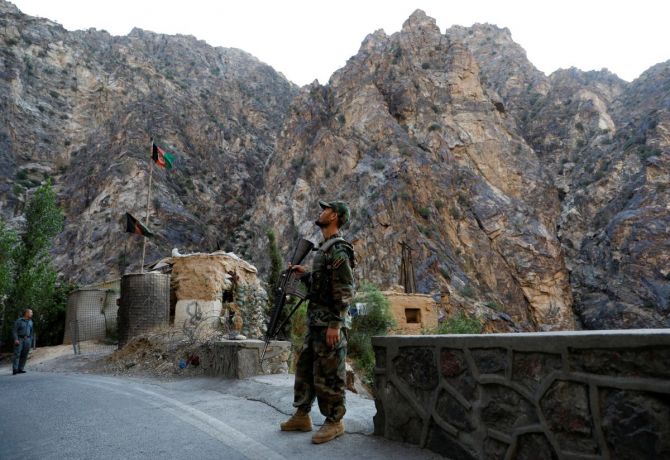 IMAGE: An Afghan National Army soldier stands guard at the check post at Mahipar on the Jalalabad-Kabul highway in Afghanistan. Photograph: Mohammad Ismail/Reuters

What do you think will be India's primary concerns, anxieties and threats after the US withdrawal?

India's primary concerns with be the security of its embassy and consulates, the preservation of the gains of the last 20 years to which India has contributed through large and small development projects and scholarships and education opportunities for Afghan students in India amongst other things, and the prevention of the use of Afghan territory by hostile radical and terrorist outfits supported by Pakistani agencies to target India.

India would not like to see Pakistani domination and tutelage of Afghanistan against Indian security and economic interests.

Do you see an enhanced China-Pakistan influence in Afghanistan? Will it improve their negotiating power with the United States? What bearing will this have on the security situation in Kashmir?

Yes. The vacuum that US will leave in Afghanistan will be filled by radical Islamist outfits including al-Qaeda, IS and other more regional groups, and Pakistan and China at the expense of the US, the West, contemporary Afghanistan, India and others who have supported the post-Bonn Islamic Republic.

China and Pakistan will ride piggy back on each other, Pakistan acting as China's eyes, ears and contacts in Afghanistan initially, and China providing economic heft to Pakistan's political influence couched in the language of geo-economics serving China's interests.

At the most elementary level, China will use its leverage with Pakistan and the Taliban to prevent any ties between the ETIM [East Turkistan Islamic Movement] and the repressed Uighur community with Islamist forces.

At a strategic level, China will try to use Afghanistan for its strategic Belt and Road Initiative towards the Persian Gulf to relieve pressure on it from the Quad on the Indo-Pacific and link up with its $400 billion 25 year geo-economic deal with Iran.

But in between the two, China will have to proceed cautiously lest it be caught in a new 'bear-trap' like the Soviets were in the 1980s.

One commentator said the US withdrawal will bring the 'barbarians at our gates' -- can it result in the resurrection of Afghan mercenary jihadi activity in PoK and across the LoC?

It will certainly embolden Islamist forces in Kashmir and strengthen the activities of anti-Indian terrorist groups supported by Pakistan in India as a whole.

So far, however, the Taliban have maintained that they desire good neighbourly relations with India and have no intention of interfering in India. We will have to see their actions. 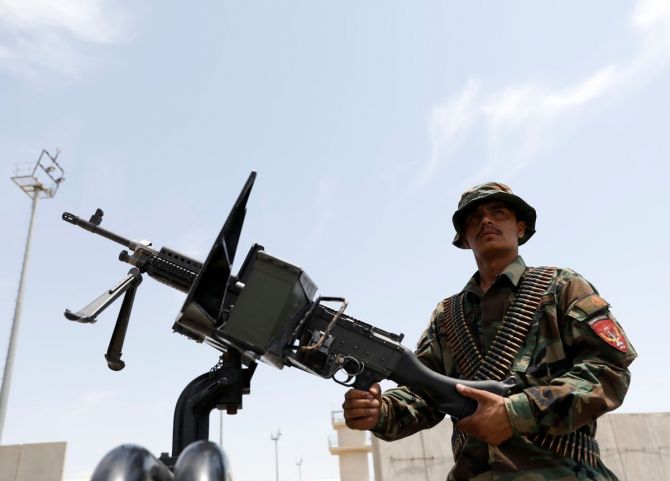 IMAGE: An Afghan security force member keeps watch in an army vehicle at the Bagram air base after American troops vacated it in Parwan province, Afghanistan. Photograph: Mohammad Ismail/Reuters

The current Afghanistan government has said it may need military assistance in the future -- how is India's role going to change in the country vis a vis the assistance we have been giving over the past two decades?

The Afghan State and security forces have many weaknesses, at least partly due to the nature of Western support over the last 20 years, but there is little doubt that the Taliban have little public or political support within Afghanistan.

There will be resistance to their attempt to takeover militarily, and their harsh rule. The resistance will eventually prevail.

Last time it took 5-6 years and 9/11. We will have to wait and see what happens this time.

India should help mobilise international opinion including through the UN Security Council of which it is a non-permanent member in the quest for peace in Afghanistan, and insist on an end to the violence and a ceasefire, and a negotiated political settlement, not a military takeover, as a condition for any relaxation of sanctions and recognition.

India should continue to support the Afghan State in accordance with our Strategic Partnership Agreement of 2011 so long it exists; talk to the Taliban to press them to the negotiating table for good faith talks on a political settlement acceptable to both sides; and support the new generation of Afghanistan on which we have invested along with others, as much as we can.

As far as development assistance is concerned, we may need to review projects from a security point of view, but our assistance in the form of scholarships and programmes for Afghans in India should continue.