'The PM says he believes in discussion and debate, then why are discussions and debates not being allowed in Parliament?' 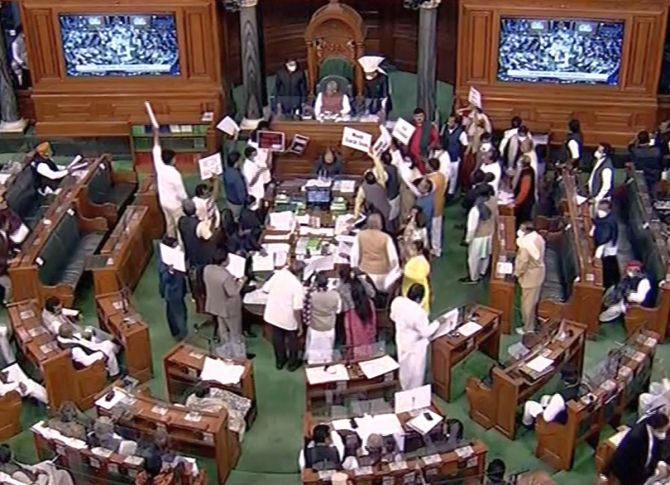 IMAGE: Opposition MPs protest in the Lok Sabha during the winter session of Parliament in New Delhi. Photograph: RSTV/PTI Photo

"The government has to say why the Opposition members were forced to move to the well of the House with their protest. They did that because the democratic rights of the Opposition were not allowed to be exercised in Parliament," says N K Premachandran, the Revolutionary Socialist Party's lone Lok Sabha member.

Premachandran was first elected to the Lok Sabha in 1996 from the Kollam constituency in Kerala, he was re-elected in 1998. In 2000, he was elected to the Rajya Sabha.

After the winter session of Parliament ended, Premachandran spoke to Rediff.com's Syed Firdaus Ashraf about the functioning of Parliament under the Narendra Damodardas Modi government and what it means for the future of Indian democracy.

How do you see the proceedings of the winter session of Parliament?

No serious legislation was brought in by the government during this session.

However, on the last day of the session, two important legislation -- the Election Amendment Bill and the Child Marriage Prohibition Bill -- were introduced in the House.

They didn't even follow the procedure because they brought the bills and concluded the procedures the same day.

The government introduced these bills in a hurried manner. They had ample time to introduce the bill and discuss it, but unfortunately, they did everything by flouting the procedures and rules of the House.

This is not a healthy legislative practice.

Was the suspension of 12 MPs a major concern for the Opposition parties as they were reduced to a minority in the Rajya Sabha?

The suspension of the Opposition members was disproportionate to the punishment given to them.

Something happened in the last session of Parliament and they were punished during this winter session by suspending them.

Suspending them for the entire session was totally unfair.

They (the government) made a condition that the suspended MPs must apologise for their behaviour which was totally unfair and undemocratic.

The government was not even ready to have an all-party meeting to resolve the issue.

Why did the Opposition members remain adamant about not apologising for their behaviour in Parliament?

If they rendered an apology, then they had to admit that they were wrong.

The government has to say why the Opposition members were forced to move to the well of the House with their protest.

They did that because the democratic rights of the Opposition were not allowed to be exercised in Parliament.

They have the right to ask for the division (of votes) which was not allowed.

It is their democratic right which they have got under the Constitution of India.

The government did not allow division of voting and simply bulldozed their bills in Parliament.

In this scenario, members have no other option, but to protest.

Who is responsible for all this?

If the government was transparent, definitely the Opposition members would have not done what they did.

The government is responsible for running the House in a smooth way, but they are not doing that and instead blaming the Opposition for everything. 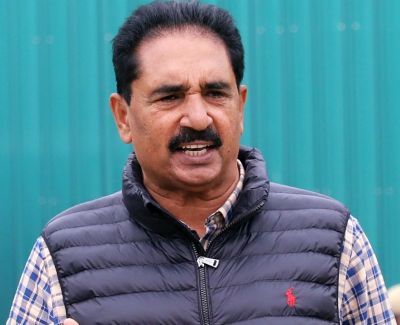 Opposition MPs allegedly beat up marshals, whistled in the Rajya Sabha, stood up on benches and threw papers in the House. Is this acceptable?

This is not the first time such things have happened in Parliament.

When the BJP (Bharatiya Janata Party)) was in the Opposition, these things used to happen.

The conduct of the Opposition members in the House and the punishment given to them are totally disproportionate.

I am not justifying anything, but who is responsible for the smooth running of the House?

The primary responsibility is that of the government. The government is not taking any initiative in conducting the House in a proper way and that is the problem.

If the government is unresponsive, then obviously the Opposition members will be provoked.

In a democracy, disruption is also a kind of protest and this was said by the late BJP leader Arun Jaitley.

The PM says he believes in debates in Parliament as it is healthy for democracy. It looks like the Opposition is disrupting Parliament even during Zero Hour and Question Hour.

Political consensus is to be ensured among the government, the Opposition parties, all the parties, for running Parliament (smoothly).

If this does not happen, then it is difficult to run Parliament smoothly.

This is not the first time disruptions are happening in Parliament.

The PM says he believes in discussion and debate, then why are discussions and debates not being allowed in Parliament?

We in the Opposition raised the issue of Lakhimpur Kheri, so why is the government not responding in Parliament?

An SIT (special investigation team) report alleged that there was a conspiracy in Lakhimpur Kheri.

The Opposition will certainly raise the issue in Parliament and the government has to come with a counter statement.

Nothing of the sort is being done on their side.

I feel the government wants disruption of Parliament too.

How do you assess this winter session of Parliament?

This winter session comparing with the previous session was better. Productivity was better.

Even though there was suspension of 12 MPs, other Opposition MPs participated and discussed various issues in Parliament like the salary allowances of judges, Covid.

They participated in the Election Amendment Bill too.

Comparatively, the previous session was a complete wash-out.

My point is that the government has to take the initiative to ensure smooth functioning of Parliament.

It is the primary responsibility of the government. Now, they are evading that responsibility and blaming the Opposition for the disruption of Parliament.

So, we are not having any fruitful discussion.

In such a case, the Opposition needs to change their strategy and this is solely my opinion.

But the public believes the Opposition does not allow Parliament to function.

The Opposition is a fractured and a divided house now. This is an advantage for the Modi government.

There is no unity among the Opposition parties.

On the farm laws, there were differences among the Opposition parties like the Congress, the Trinamool Congress and other parties.

Each Opposition party is proceeding with their own separate agenda.

In such a situation, the government will take advantage and that is exactly what is happening.

How does a divided Opposition benefit the Modi government in Parliament?

The government has an absolute majority and if you have to fight against it, then the entire Opposition has to be united.

Unfortunately, such a unity is not there and that is the problem.

The Election Amendment Bill was introduced and passed the same day without any discussion.

Why was this Bill brought in such a hurried manner and cleared on the same day?

The Bill was cleared by the Cabinet one week ago. What prevented the government from introducing the Bill two days before and having a discussion on it?

They did not do it because the government does not want any discussion in Parliament.

The Bill is introduced and the same day it is passed. This was never heard of. Members want to go through the Bill and propose legislative amendments.

All these legislative rights are being denied and taken away. Therefore, we will doubt the government's bona fides.

Do you think this will be the nature of parliamentary proceedings in the future?

Most of the cases where the government is having some political interest, they are moving Bills in this manner.

So, we are using the term bulldozing. The government is bulldozing Bills in Parliament using its brutal majority.

Linking the voter ID card with Aadhaar is okay, but there are so many technical issues involved in it.

It should not take away the right of a voter to not vote because Aadhaar details are not given.

Sometimes, there are chances of misuse and these things have to be discussed before the Bill is passed in the House.

Unfortunately, no discussion was held and the Bill was passed.

They are bringing a Bill on the last day and bulldozing it.

What is the reason? What is the urgency? Why did they not bring the Bill in advance?

Opposition members drew attention to Modi not attending Parliament. What is your view on this?

He must attend the House proceedings to show its significance.

Earlier, prime ministers used to attend the House, Question Hour, Zero Hour. They used to be in the House if they did not have official work.

Prime Minister Modi has stopped coming to Parliament during its session.

Rajya Sabha member Rakesh Sinha told me that other prime ministers did not attend Parliament regularly and they used to come to the House only when required them to do.

No. All the prime ministers used to attend Parliament sessions.

Vajpayee used to take part in the Budget discussion, motion of thanks, attending Parliament to listen to the debates.

Does it send out a message that Modi is not interested in discussion and debate with Opposition members?

When the prime minister of India attends the House, the seriousness of the House increases.

When the prime minister responds to questions in the House, it gets more importance.

Again and again, I am saying the primary responsibility to run the House smoothly lies with the government.

You also pointed out that the media was not getting access to Parliament.

The media is not getting access to Parliament; now they are reporting after watching television.

This is not fair. The media is part and parcel of a parliamentary process.

Without the media, how can Parliament function?

It is very unfortunate to hear that the Press Information Bureau has not renewed the (accreditation) passes of Parliament of many journalists.

In the press gallery, only 2-3 people are allowed now.