'The anti-Muslim discourse somehow creates an atmosphere of fear.' 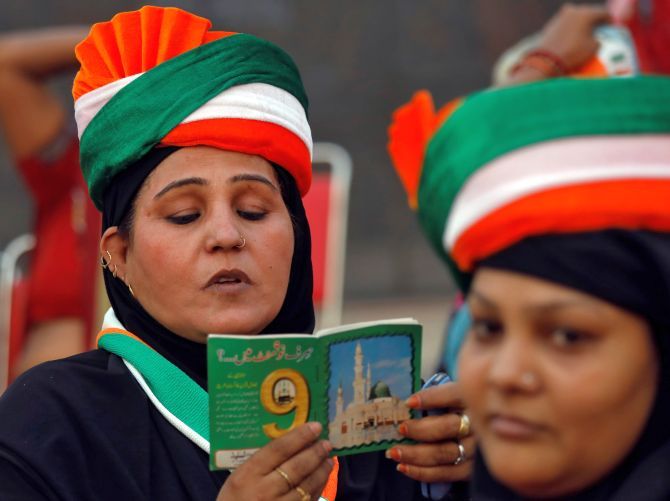 Can Indian Muslims live in a Hindutva-dominated society?

Is there a decline of Muslim MPs in the Narendra Damodardas Modi era?

Are Indian Muslims citizens of the nation first or Muslims first?

If you have ever thought of these questions, then Hilal Ahmed, associate professor at the Centre for the Study of Developing Societies, New Delhi, provides some answers in his book Siyasi Muslims.

"The BJP's recent electoral campaign is a revealing example. The party did not work with the idea of Hindu vote bank at the national level. Instead, it organised the campaign in such a way that voters at the constituency level might be polarised in the name of Hindu interest," Ahmed tells Syed Firdaus Ashraf/Rediff.com.

Yes. Many books are being written on Indian Muslims these days, which is a very positive development. These new intellectual endeavours, in my view, underline two significant tendencies.

First, these authors challenge the given notion of Muslim victimhood. They try to unpack the subtle processes by which different types of Muslims are excluded and posed as the 'Other'.

Secondly, these writings also mark a shift from the earlier generation of Muslim intellectuals, for whom Partition was the dominant reference point.

For the generation that grew up in the 1970s and 1980s, the experiences were different -- electoral democracy, liberalisation, Babri Masjid, Mandal and finally the Modi-led Bharatiya Janata Party.

In order to respond to these new questions, these authors rely heavily on personal experiences and evolve an interesting method out of it. They force the reader to get engaged with their specific experiences as Muslims.

However, my book does not rely on my individuality as a Muslim.

On the contrary, it responds to those provocative questions about Muslims, which dominates our public discourses.

For example, the anxieties such 'Are Muslims more religious than others?' or 'Do they vote collectively as a vote bank?' require a very different and systematic response.

My experiences as an individual cannot answer these puzzles -- precisely because these anxieties are posed to a collectivity called 'Muslims', which is often associated with separatism and political violence.

As an academic, I realise it is my professional duty to engage with such debates of public life following the procedures, which we follow in our serious academic researchers.

This is the reason why the book examines the socio-cultural processes that contribute to the making and unmaking of various Muslim identities in India, especially in the post-2014 period.

What was the reason for you to call your book Siyasi Muslims?

The term Siyasi -- an Urdu/Persian word -- which generally means 'political', is used intentionally to describe the diverse forms of Muslim identity. More specifically, there were two reasons to select this title.

First, Muslims are often described as a politically conscious community. The discussion on 'Muslim vote bank' and 'Muslim appeasement' relies on the assumption that Muslims are fully aware of the complexities of the electoral system and, therefore, always act accordingly.

This popular portrayal envisages Muslims as a deeply political community. In other words, Muslims are siyasi.

There is another meaning to the term siyasi. It is used to denote those individuals and groups who are not trustworthy, who work only to further their own stakes and never join the mainstream of the nation.

Muslims of India are often defined in these terms. It is alleged that they are obsessed with Islam, which does not allow them to embrace any other identity wholeheartedly.

This is the reason, we are often told, rightly or wrongly, that they do not sing Vande Mataram, that they eat cow meat and support Pakistan.

This untrustworthiness makes them siyasi!

These two meanings of the term 'siyasi Muslims' contribute to a very popular yet stereotyped perception of Muslims of India -- an informed and conscious group of people who are untrustworthy and disloyal to the nation! 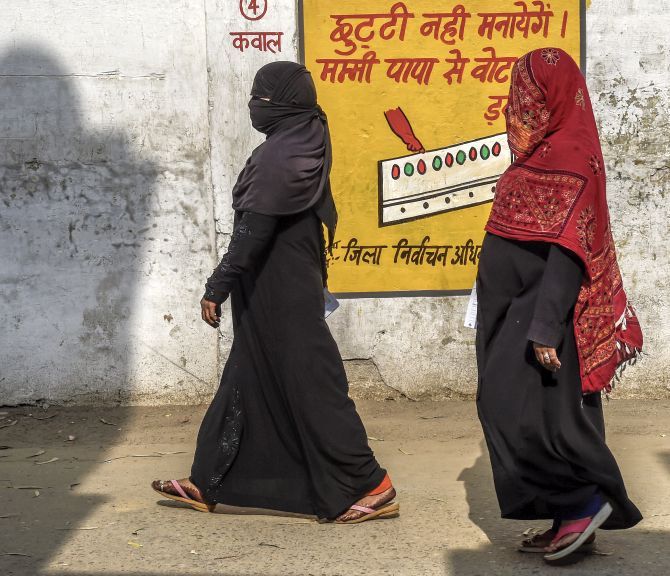 IMAGE: 'The idea that there are national level 'vote banks' of any community is technically misleading. The electoral heterogeneity does not allow us to image such a possibility.' Photograph: Atul Loke/Getty Images

In your FAQ section of the book, you mention that there is no evidence of a 'Muslim vote bank in India'. In fact, Asaduddin Owaisi too says the same thing, but adds that the only vote bank which exists in India is the Hindu vote bank. Do you agree?

There is a chapter in the book, which tries to map out the history of the idea of 'vote bank' in post-colonial India.

I argue that in the first-past-the-post system of our kind, 'vote banks' are always constituted on a different ground (including on religious and caste lines) at the constituency level.

Of course, all political parties make favourable configurations of these vote banks to win elections.

However, the idea that there are national level 'vote banks' of any community is technically misleading. Electoral heterogeneity does not allow us to image such a possibility.

Hence, I do not subscribe to the view that there are Muslim or Hindu vote banks at the national level.

Having said that, I do not ignore the possibility of 'political polarisation' on religious grounds.

The BJP's recent electoral campaign is a revealing example. The party did not work with the idea of Hindu vote bank at the national level. Instead, it organised the campaign in such a way that voters at the constituency level might be polarised in the name of Hindu interest.

This Hindu polarisation does not necessarily produce vote banks, but it creates and sustains an anti-Muslim discourse, which might help the BJP to capture the 'floating and non-committed voters'.

We must remember, Muslims refuse to be known as opponents of Hindutva.

Another interesting fact about your book is that you say around 6 to 7 per cent of Muslims vote for Modi. Is this number based on hard data?
Have you ever tried to speak to that section of Muslims to find out why they find Modi appealing to them considering the fact that his cadres openly talk of divisive politics?

Of course, I do not entirely rely on survey data. In my view, survey findings must not be taken as 'answers'. Rather, these broad findings always help us asking new questions. This is the reason, why, the book employs a variety of research techniques, including focus group discussion.

As far as the Muslim voting pattern is concerned, there are four important aspects, which we must note.

First, it depends on party competition at the state level. In those states where the nature of electoral competition is bipolar (meaning there are only two main parties in the fray such as in Gujarat), the Muslim vote would naturally be divided between two main contenders.

Therefore, the chances of the BJP to secure Muslim voters would be higher.

Second, we must also remember that a number of regional leaders have joined the BJP in the last few years. These leaders also bring with them a section of 'loyal voters', which also includes Muslims.

The BJP, like other parties, tries to use an informal network to attract Muslim voters at this level.

Muslims are directly threatened to vote for the BJP!

This is precisely what Maneka Gandhi said at one of her election meetings.

Don't miss Part 2 of this interview: 'Muslim appeasement has become the dominant narrative of Indian politics'