'Not only has the ire against the Congress subsided in Gujarat, but people are now coming to their senses.' From giving a near scare in the 2017 state assembly elections to the ruling Bharatiya Janata Party to losing key legislative members to the latter ahead of the Lok Sabha elections 2019, the Congress party in Gujarat may seem to be losing the narrative.

Not so, believes Paresh Dhanani, the leader of the Opposition in the Gujarat assembly who will contest the Lok Sabha election from Amreli.

"We have worked on our weaknesses within the party in Gujarat," Dhanani tells Vinay Umarji.

You had a near win in 2017 before the BJP went on to form the government with a simple majority. Has the Congress let it slip since then?

It is a very wrong notion.

We got 77 seats, there were four alliance partners that came up to 81.

So, 81 plus 16 comes to 97 where we would have formed a government in Gujarat.

People of Gujarat were in the mood of a change in regime in 2017, but we failed by mere margins.

The people still have the same expectation which will be fulfilled in the 2019 elections.

The common man in Gujarat is aware that despite BJP rule in both Gujarat and at the Centre for the last five years, no new work has been undertaken in the state. Nor has Gujarat benefited from a BJP government at the Centre.

As the then chief minister, Narendra Damodardas Modi had raised 107 questions with the UPA (United Progressive Alliance) regime on issues Gujarat faced.

After five years, the Gujarat Congress has been raising these same questions as the issues remain unresolved under his prime ministership.

In that case, what has been your strategy for the general election?

We cannot compete with the BJP's crony money in campaigning.

We are a farmers' and common man's party.

Verified Whatsapp and FB pages have been cancelled by the government through misuse of power.

But our party workers known as jan mitra (the public's friend) have conducting the ground work for us.

More than 47,000 booths across the state have been covered and since the last several months we have been running a door-to-door campaign.

We have worked on our weaknesses within the party in Gujarat.

Organisational strengthening within the Congress has also been a continuous process.

We have devoted party workers who are revolutionary in a non-violent way.

The BJP has been a party that has misused government machinery to instill fear among the common man and lost his trust.

On the contrary, we have been regaining that trust that we lost in the 2014 elections and we will soon see the results on May 23. 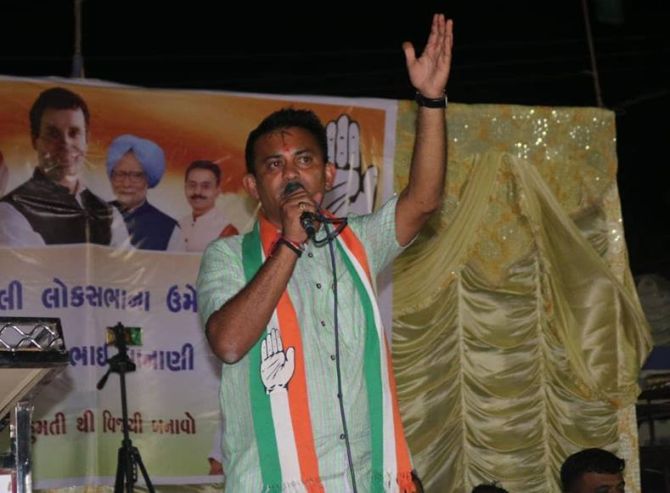 Soon after the state assembly polls in 2017, the Congress was confident of winning anywhere between 8 to 12 of the 26 Lok Sabha seats. Where do you stand now in your estimates?

There was a change in voting pattern between 2009 and 2014 where our vote share fell and the BJP gained.

This was a combination of people's ire against the Congress and the BJP's machinations.

However, it is now clearly visible on the ground that the pre-2014 promises have not been fulfilled by the BJP such as bringing black money back, addressing Article 370 in Kashmir, joblessness or farm loans.

Not only has the ire against the Congress subsided among the people of Gujarat, but Modi's charisma has waned. People are now coming to their senses.

It is on the back of these issues that we believe the tide will turn in our favour and we are confident of winning all 26 seats in Gujarat.

The Congress had said it would announce candidates a year before, but didn't do so.
Also, in recent months the party has seen a setback with some of its leaders joining the BJP.
Is there a leadership deficit in the Gujarat Congress now?

We did announce, but only to the potential candidates, telling them to strengthen the party and asking them to join programmes to mobilise the common man.

The party has made efforts to identify potential candidates since the last six months.

And the names that the state leadership chose, the national leadership has also endorsed after the people's choice.

The Congress is a movement, not a mere party, hence we don't see such things as a setback.

Hardik Patel is unable to contest on a Congress ticket.

In a bid to hide their weaknesses and lack of integrity, the BJP and the RSS (Rashtriya Swayamsevak Sangh) has been spreading rumours of dissent and infighting within the Congress party.

The Congress is both morally strong and united.

This will be proved by our party workers in the coming election.

As far as Hardik is concerned, one needs to ask why is the government afraid of a 26-year-old youth contesting elections.

The government has misused its power and presented half truths to prevent Hardik from contesting, but I am confident that the people of Gujarat will reply through their votes.

Also, the BJP's candidates are not adept at running a government and so the ruling party is luring able leaders from the Congress by hook or crook.

During the 2017 assembly polls, the BJP government in Gujarat struggled to make it to the 100 seat mark.

Now, the party is preparing for Modi's return after it loses the 2019 election to present him with an able government in Gujarat by luring able leaders from the Congress.

The Congress has largely been known as a rural party, especially in Gujarat. Will the urban areas be a concern in the election?

In any case, several people who have migrated from rural areas to urban areas irrespective of caste or religion are with the Congress and so are the farmers as well as small and medium enterprises in the non-urban areas.

On the other hand, the urban areas house a large number of Gujarati businessmen who are very protective of their businesses and capital and, therefore, flexible in how they vote.

As such, the urban community is now divided.

The voting pattern during polls in Madhya Pradesh, Rajasthan and Chhattisgarh where the Congress won has seen a turn among urban areas where communities that never chose Congress voted for it.

Similarly, in 2019, the urban people's ire will emerge in voting.