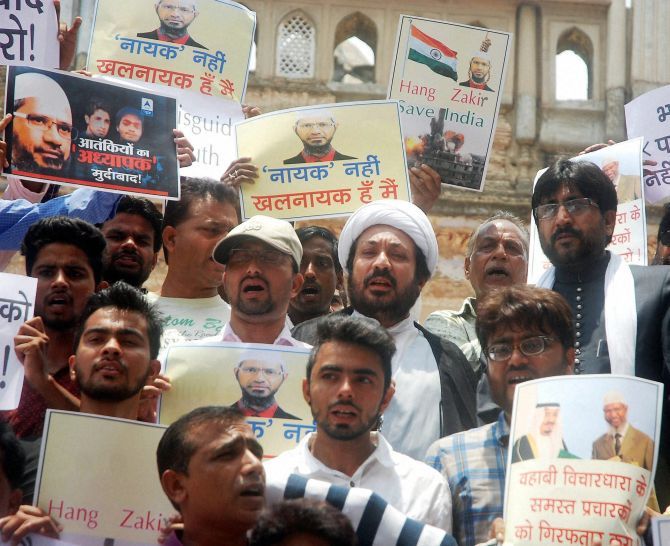 Imtiaz Jaleel is one of the two legislators the All India Majlis-E-Ittehadul Muslimeen has in the Maharashtra assembly.

A former journalist, Jaleel -- whose MIM party is headed by Hyderabad MP Asaduddin Owaisi -- has come down heavily on what he calls a media trial against controversial Islamic preacher Dr Zakir Naik.

Dr Naik, whose public discourses are attended by thousands of people and whose Peace TV has a wide footprint, has been under scrutiny by the central and Maharashtra governments for the content of his speeches after it became known that two of the five Bangladeshi terrorists who murdered patrons at Dhaka's Holey Artesan restaurant on July 2, were influenced by his teachings.

Dr Naik, who was on Umrah (mini Haj) in Saudi Arabia when the controversy broke out, was due to return to India this week but has since postponed it, preferring to travel to Africa. 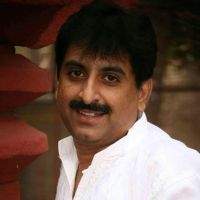 "If the charges are so serious against him, then the big question is" Why hasn't a single case been registered against Dr Zakir Naik?" Jaleel asks Rediff.com's Syed Firdaus Ashraf.

You have been saying that the media is conducting a trial of Zakir Naik. As a former mediaperson yourself, what exactly do you mean by this? Are you saying the media should go soft on him?

It is not about Zakir Naik alone that we are talking about. We have noted in the last two years that this thing has been growing.

The investigating agencies charge somebody with wrongdoing. Before the case goes to the police, a case is filed and proper due legal course is finished, television studios pronounce their verdict.

For example, those five boys from Hyderabad who were arrested for links with ISIS have already been pronounced guilty in television studios. They should be punished if they did something wrong for sure, but who will decide whether they are innocent or guilty?

As far as Zakir Naik is concerned, if the charges are so serious against him, then the big question is: Why hasn't a single case been registered against Dr Zakir Naik?

We respect the law of the land and we only hope that the law take its own course. Whoever is guilty must be punished.

Is it not true that ISIS followers who killed people in Dhaka were following Zakir Naik on Facebook? Doesn't this prove he propagates the ideology of hatred?

As far as I know and you know, you see a crowd of one lakh (100,000) people attending Dr Zakir Naik's speeches. So many people attend and obviously the investigating agencies must be reporting this to their bosses.

If this is what he said, then why was no notice ever issued? Why was no action initiated? Why were they waiting for 'Bangladesh' to happen?

But it is only now this has come out in the open. The people from Kerala who left to join ISIS were also following Zakir Naik. That is why probably the investigating agencies must have woken up now.

But not filing a case proves that there is not much in the hands of the investigating agencies (against Zakir Naik). It is only hungama (noise) that is being created in the media and therefore we are saying, 'Stop the media trial against Dr Zakir Naik.'

Respect the law of the land and let the law take its own course. You cannot pressurise the investigating agencies just because some TV channels are crying hoarse against Dr Zakir Naik.

We are against the media donning the role of investigating agencies. Let the police file a case and do a proper investigation (against Zakir Naik). File a proper case.

This is the same country where Ajmal Kasab could have been hanged on the same day at the Gateway of India. We did not do that. We gave him a lawyer to defend himself.

After the due process of law he was hanged and it was the Muslims of this country who said they will not allow Kasab to be buried in their graveyard.

So you think the television channels are deciding who is guilty and who is not guilty?

Exactly. If you see the Hyderabad case where young boys were arrested (for alleged links with ISIS), the television anchors that day were calling them 'aatanki (terrorists).' They are merely accused, so how can they be called 'aatanki'?

The courts are very clear that nobody can be pronounced guilty till the due process of law is over. Merely on the basis of some accusation you cannot frame anybody and cannot label that title.

What if tomorrow those youngsters are set free? What if Zakir Naik is set free tomorrow? This tarnishing and hounding by the media is too much.

Ironically, it seems the media today is working on its own ideology and political leanings. They are playing to the gallery.

When you look back at the media, after having been a part of it, how does it strike you now?

This is the reason I quit the profession. I could have joined the print media after leaving the electronic media, but I did not do that.

Sensationalism has become a part of the profession. Just because one channel has done it, everybody takes the lead because they do not want to be left behind in the race.

In the (Zakir Naik) case also, one or two channels started it and see the language they use. You must listen to them.

But you won't name them?

I won't name them, but obviously readers know whom I am pointing out. A journalist has to present both the sides and be neutral. Journalists cannot be like a judge dictating orders.

But you cannot deny the fact that Zakir Naik is denigrating and insulting other religions. Don't you think he is promoting hatred and there can be some kind of case filed against him?

Please for god's sake take action! You filed a case against Akbaruddin Owaisi because you found his speech objectionable and he had to go behind bars for 40 days.

Perhaps he is the only politician in the country who has faced the law for objectionable comments. We are saying there cannot be any compromise on terror, whoever it may be.

But to arrest Zakir Naik he needs to come to India first.

If at all they do that and if he does not come, then he breaks the law and you can always question that.

Just because the media went to town shouting, I don't think he is answerable to the media.

Even Prime Minister Narendra Modi spoke indirectly about Zakir Naik when he said preachers of hate are threatening society.

Why indirectly? Prime Minister Modi must say in his Mann ki Baat programme that Zakir Naik is spreading hatred. Individuals do not matter, it is ultimately the country that has to be safe.

But Zakir Naik has openly supported Osama bin Laden. I have myself heard that speech. Don't you think that is wrong?

Obviously there must be some statement that he may have made, rather, he made that would be objectionable. But there is also the fact that he commands a following among Muslims and at the same time there are a number of (Muslim) people who do not concur with his views and they oppose him.

This is the beauty of Islam as it is a liberal religion. At the end of the day we follow one Allah, one Prophet and one Quran. Differences of opinion can be there and we can welcome that.

Don't you think the stricter form of Salafist Islam, which preachers like Naik are propagating, is a danger to India and even to Islam itself?

I would not like to make any comment on the different sects of Islam. As I said, Muslims across the world follow one Allah, one Prophet and one Quran. There may be differences of opinion about certain principles.

Are you not indulging in vote bank politics by supporting Zakir Naik because of his popularity?

The irony with Muslim political parties is that whatever stance they take on whatever issue, at the end of it people link it to some political advantage, which is very unfortunate.

If we do not take a stance, the media will say you represent the Muslim community, so why were you silent when this thing was happening?

People will ask the question that Muslims follow your party, so why were you silent? And when we take a stance we are told okay, so you want to make political mileage out of it.

The same thing happened in Bihar. When we decided to contest the elections in Bihar we were told that we are going to make the BJP win, but the fact was we were contesting only six seats in Bihar.

Even if we had won all those seats it would have not made much of a difference to the overall situation.

People who don't have commonsense make these charges. We do not bother about it.