'Narendra Modi is both a very exciting and polarising figure' 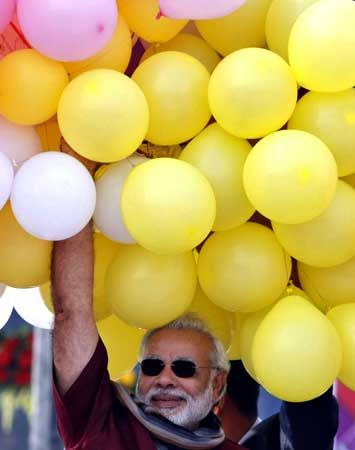 'Modi's campaign has been strikingly devoid of anti-Muslim rhetoric. After the kutta pilla incident, it has been several months since he said something horrible about the Muslims of India. It is the result of democratic constraints. He has to make compromises...'

'He's trying to reinvent himself. He will politically hurt himself if 2002 becomes the definition of Mr Modi again,' political scientist Ashutosh Varshney tells Rediff.com's Archana Masih.

Mahatma Gandhi's originality lies in conceptualising a nation that could accommodate every group, feels Professor Ashutosh Varshney below, left, whose latest book Battles Half Won, India's Improbable Democracy, is a collection of ten lively and informed essays on the consolidation of Indian democracy.

Part 1 of the interview: 'AAP's beginning has been promising, but its struggle lies ahead'

"The Hindu nationalist conception in its pure form is very European. From their early literature to (Lal Kishenchand) Advani's notion in 1991 -- that India is a Hindu nation. This is not how Gandhi conceptualised India. His task was how to turn a civilisation into a nation," says the Sol Goldman Professor of International Studies and Social Sciences at Brown University, Rhode Island, USA.

"Indian identity had to be conceptualised as a layered identity or as a hyphenated identity," he adds in this Election 2014 series of interview with experts on Indian politics.

An alumnus of Jawaharlal Nehru University, the Massachusetts Institute of Technology and a former professor at Harvard, the Saharanpur, Uttar Pradesh-born Varshney is a leading scholar on India.

He spoke to Rediff.com's Archana Masih about the mechanisms within Indian democracy that repel extremist politics, the pivotal role of politics in building the nation and how nothing has hurt the Congress more than the inability to handle Robert Vadra.

Why do you think the Congress, which seemed to be firmly on the comeback trail in May 2009, lost its way so badly?

Part of it is that any party that rules for so long, unless it has a leader like Nehru or Gandhi is likely to become arrogant and lose touch. That's the nature of power.

That's why incumbents unless led by someone of that stature should not be in power for more than two terms. Many polities have a constitutional limit, like America has a two-term limit for President.

Why has UPA2 become a totem for many Indians of the worst government India has ever had?

The other part of the problem is the Congress' inability to resolve organisational issues. The new, rising India is not willing to accept dynasties as a basis for rule.

The aspirations of the new urban India that does not have political pedigree -- the consciousness of that India has to be brought into political calculations now.

Rahul Gandhi did bring new people in Youth Congress and NSUI (the National Students Union of India), but he has been unable to reform the Congress.

The mainstream of the Congress party is still a relic of the old era.

I don't think populism has been the undoing of the Congress. The Congress was trying to become a party of social welfare because secularism -- the earlier ID -- had become weak.

So the Congress was trying to reinvent itself with a number of welfare schemes, some of which are necessary.

But corruption and arrogance on one hand along with the inability to rejuvenate the organisation are the bigger problems.

Nothing has hurt the Congress more than the inability to handle Robert Vadra, symbolically speaking.

When Robert Vadra was attacked by the AAP (the Aam Aaadmi Party), so many people were offended that the Congress party came out in his defence.

What does Robert Vadra have to do with the party? Unless the party is the property of the family.

Couldn't the party have distanced itself from that? This shows the abject dependence of the party on the family today.

If only those close to the family rise, then it is the end of a modern party. This is a way to undo a modern party, not build one.

You write in your book Battles Half Won, India's Improbable Democracy that India's democratic success is primarily a consequence of politics. Leaders and parties made democracy. In a country so disillusioned by politicians -- don't you think the Indian people can argue that their present leaders have failed our democracy?

The two leaders that towered over the political landscape were Gandhi, Nehru and the teams around them.

Politics made the Indian nation.

If India had followed the European notion of nation building -- one language, one nation -- India in 1947 would have been 28 nations or more.

Gandhi is original in many ways. His originality lies in conceptualising a nation that could accommodate every group -- this notion of unity in diversity which to some is a sign of India's weakness.

The Hindu nationalist conception in its pure form is very European. From their early literature to (Lal Kishenchand) Advani's notion in 1991 - that India is a Hindu nation.

This is not how Gandhi conceptualised India. His task was how to turn a civilisation into a nation. That project wasn't possible with a 'One Nation, One Language' formula.

Indian identity had to be conceptualised as a layered identity or as a hyphenated identity.

Then Nehru lent his prestige, charisma and personality to building institutions -- Showing up in Parliament regularly. Not attacking judges when they invalidated governmental orders or laws. Not imposing chief ministers. Not imposing state presidents, which were elected positions.

Charan Singh defeated Nehru on agriculture policies in 1956-1957. There was a vote within the party and Nehru lost the vote.

While his record is not impeccable, it is a remarkable record. He basically had democratic instincts and was committed to democratic principles. Those leaders were born out of the freedom movement and brought a level of commitment to Parliament and politics which is not what can be often said about the leaders of today.

Politics made the nation, consolidated the nation and institutionalised India's democracy.

In the last 20 years, there has been a lot of disillusionment with leaders but democracy also has self correcting mechanisms.

In any case Mr Modi was generating a lot of excitement. Modi is both a very exciting and polarising figure.

A lot of disaffection and anxiety generates alternatives. The fact that it is an open ended process and alternatives can emerge which saves democracy.

There will always be disillusionment. Even under Nehru there was some.

There's a sense that democracy is not a system for encouraging individual brilliance, it is about team work, about building coalitions, making compromises.

Even Nehru had to do that. (Delhi Chief Minister Arvind) Kejriwal will have to do that.

Modi's campaign has been strikingly devoid of anti-Muslim rhetoric.

After the kutta pilla incident, it has been several months since he said something horrible about the Muslims of India.

It is the result of democratic constraints. He has to make compromises.

It is often said that democracy is the worst form of government until all other systems have been considered.

Disappointment and self correction are both built into the democratic system.

Sometimes, the pangs of disappointment are very deep and quite long, but self-correction is always likely to be on the horizon.

Therefore, it remains the worst system until all other alternatives have been examined.

It is the best system we have for running human affairs.

So Indian democracy has a mechanism to repel extremist politics of any kind?

Right. There will be some on the fringe always. The system allows freedom to conduct that kind of politics also.

What the system does not allow is violent extremism.

You can find violent insurgencies, but the way Indian politics deals with them is very interesting.

Firstly, faced with a violent challenge to the Nation State, the modern polity responds to it with counter-insurgency.

But over and above that India does two distinctive things: It throws economic resources into the region of disaffection to wean the base of the insurgents away. At least it tries to do so.

Three, and this is absolutely distinctive and only democracies can do that: It keeps a channel of dialogue open with insurgents and persuades them to run for office.

So even though they are typically opposed to the party that runs the government, if they win it strengthens the system.

If you only had military means to deal with insurgents, it's possible that you might just break up, it is possible that your democracy could be undermined -- but you don't do that in India, you follow a three-fold approach.

As a result, violent extremism is always pushed to the sidelines. It is bottled up in certain parts.

Naxalism is on the wane now, will it rear its head again? Yes. Will it be able to capture India? No.

Will the RSS (Rashtriya Swayamsevak Sangh) capture India? No.

Will the BJP (the Bharatiya Janata Party) capture India? It may, but in its ideologically moderate form. Not in the ideologically pure form.

The Congress is the prime Left-of-centre party now, not the CPI-M (the Communist Party of India-Marxist).

While the BJP is the prime Right-of-centre party.

If the BJP was ideologically pure, it would have an anti-Muslim rhetoric in its campaign. Their every ideological text says that Muslims are disloyal to the country and they partitioned the country. This is in the DNA of pure Hindu nationalism.

Mr Advani was the last politician to try that at the national level. He could not become the PM of India, (Atal Bihari) Vajpayee could.

The only way to describe Vajpayee is that he was ideologically moderate. Later, Advani himself became a moderate.

In fact, in the Modi versus Advani fight, Advani was the moderate.

Now Modi's campaign has been devoid of anti-Muslim rhetoric. There are disturbing things like the appointment of (former Gujarat minister of state for home) Amit Shah in UP, but Modi has not associated himself with the Muzzafarnagar riots.

The MLAs (the accused in the Muzzafarnagar riots) were honoured in Agra before Modi arrived (for his election meeting). He did not share the stage with them.

In the Muzaffarnagar riots, it seems the local wings of the BJP were involved.

Modi cannot have a strategy called riots in India as a way to win elections. It just cannot work because the middle class that was adoring him was doing so for his governance and growth record. 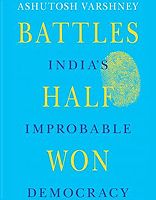 He's trying to reinvent himself. He will politically hurt himself if 2002 becomes the definition of Mr Modi again.

Part III of the interview : 'If the urban middle class returns to vote, that will be an electoral novelty'