'Military still the most powerful institution in Pakistan'

'It has a natural inclination to foster as much competition among civilian politicians as possible.' 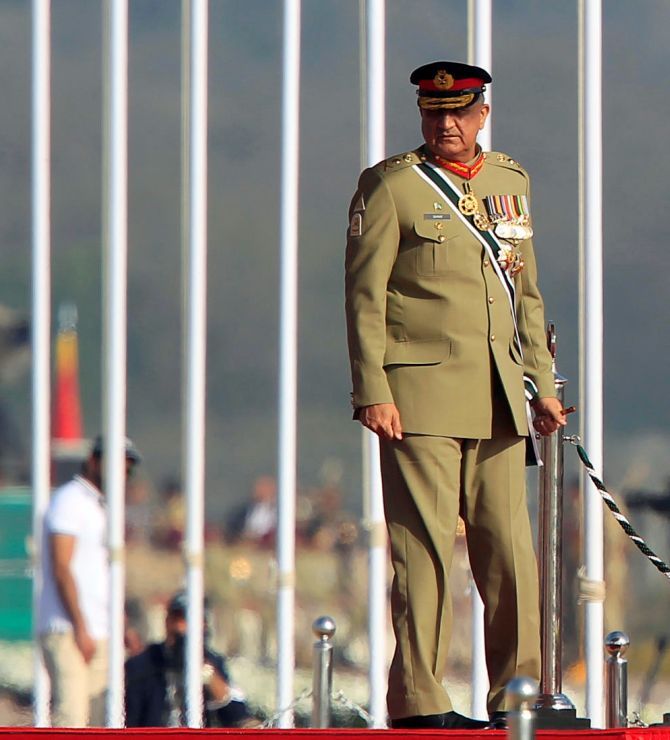 IMAGE: 'The appetite for the war on terror is rooted in a change in the approach of the military, not the civilian government.'
Pakistan's army chief, General Qamar Javed Bajwa. Photograph: Faisal Mahmood/Reuters

Hasnain Malik, head of equity research at Exotix Capital, tells Aditi Phadnis that if the general election in 2018 is conducted in a free, transparent and fair manner, it may rank amongst Pakistan's historically most competitive -- and could result in a coalition coming to power.

It was generally believed that the Pakistan Muslim League-Nawaz government is pro-business. What will change with Prime Minister Nawaz Sharif's resignation?

Higher tax rates, lower subsidies, little improvement in power shortages and the attempt to compromise the independence of utility regulators and central bank contradict the perception that the PML-N government is pro-business -- at least for those businesses in the documented sector, which includes all of those listed on the equity market.

However, the failure to address the prevalence of non-payment of tax and utility bills and the reluctance to restructure the loss-making State-owned enterprises -- collectively the root causes of the persistent fiscal deficits, power shortages and deficient public services -- suggest that undocumented business activity in the black economy has continued largely as before (save for, perhaps, higher banking charges on those who do not file tax returns).

Privatising profitable State-owned enterprises like HBL and UBL in the banking sector are not sufficient for a 'pro-business' characterisation.

The disqualification and subsequent resignation of the PM do not derail the government, in the sense that the PML-N remains in charge, with its absolute parliamentary majority intact until the next election.

Arguably, with that election merely a year away, economic policy priorities were likely already focused on maintaining the status quo, including what is of most concern to foreign private investors -- the overly rigid adherence to an overvalued exchange rate, and the ongoing implementation of China-Pakistan Economic Corridor projects, which, in any event, have largely already devolved from the federal to the provincial governments.

Pakistan's current account deficit is ballooning and an overvalued currency is hurting exports.
The last central bank governor, who tried to fix the currency, was sacked and is suspected of insider trading.
What prospects do you see for Pakistan's economy?

Is the currency overvalued? Yes, on an academic, real effective exchange rate basis, perhaps by about 25 per cent. And, on a practical basis, this is a partial contributor to moribund performance on exports.

Is an overvalued exchange rate unique to Pakistan? No, several others in the frontier and smaller emerging markets have a similar imbalance.

Is a currency crisis imminent? No, as long as economic policy remains broadly orthodox and a modest devaluation to demonstrate flexibility would go a long way in restoring confidence.

Perhaps, this is more likely to occur in the interim administration which oversees the election process.

Furthermore, part of the reason for the expansion of the current account deficit is purchases of imported equipment associated with the CPEC and these imports are generally offset by inflows of Chinese capital, from a balance of payments perspective.

For those prepared to look at Pakistan from a long-term perspective, the improvement of security, with a dramatic and ongoing reduction in the number of deaths related to terror, and the benefits to the rest of the economy after the completion of the CPEC (even if there are few direct local beneficiaries in its construction phase), in terms of improved nationwide logistics, are tantamount to game changers.

After decades of severe civil disruption, this is already leading to the release of pent-up consumer demand, for example auto sales growth and corporate capital expenditure, for example new capacity additions in cement, autos and food.

All of this means there is a higher likelihood of achieving annual gross domestic product growth rates in excess of five per cent or six per cent as a result, as opposed to the three-four per cent range.

The PML-N holds 188 of the 342 seats in the national assembly and the biggest chunk comes from Punjab.
Now that Shahbaz Sharif will move out of Punjab to the federal government, do you see an electoral haemorrhage for the party?

Shahbaz Sharif's move to federal government, assuming it is not derailed by his own potential legal challenges on cases related to the Hudaibya Mills case and the 'Model Town massacre', will not, in itself, destabilise the PML-N's power base in Punjab.

A general election is due next year. How do you see that playing out?

There is a lot of water that is yet to flow under the bridge before the general election.

Do we see further legal disqualifications for PML-N personnel, splintering of the party and defections to rivals?

The Pakistan military Deep State remains the most powerful institution within the country and it has a natural inclination to foster as much competition among civilian politicians as possible.

From a military perspective, given the history of the Benazir, Nawaz and Zardari civilian governments, both the Pakistan Peoples Party and the PML-N are untrustworthy partners in power.

A more positive development, from a pro-democracy perspective, is the emergence over two decades of a vibrant civil society, which manifests itself in a free media -- where that is simply defined as non-State media as opposed to a fair media -- a greater mass awareness and engagement in political affairs, largely because of the proliferation of social media and the resultant inability of military or civilian political forces to maintain a complete veil over all of their activities, the emergence of an emboldened judiciary and the catalyst for social mobilisation of Imran Khan's Pakistan Tehreek-e-Insaf.

All of these forces make Pakistan's democracy more than surface-deep and, therefore, necessarily messier. That is good and bad.

It may mean less predictability, but it is also a required step to address issues such as egregious corruption -- one of the core reasons for the State's historic under-delivery on public goods, social justice and societal cohesion.

These forces also suggest that, to the degree that the election in 2018 is conducted in a free, transparent and fair manner, it may rank amongst Pakistan's historically most competitive.

If a coalition comes to power after the next elections, what will be the outlook on the war against terror and economic policy?

The appetite for the war on terror is rooted in a change in the approach of the military, not the civilian government.

If viewed as a self-interested entity with its own commercial interests, the military has come to a decision that it cannot sustainably allocate resources on all borders and in major city centres.

Dealing with domestic insecurity is an existential priority. It is in that context that election cycles need to be considered.

Some may be concerned that any dilution of the PML-N's absolute parliamentary majority may lead to more populist or less orthodox economic policy.

That view probably overestimates not merely the supposedly 'pro-business' nature of the PML-N, but also the degree of economic sovereignty, when it comes to macroeconomic policy enjoyed by Pakistan in its current state, running its twin fiscal and current account deficits, dependent as it is on global capital in general and, specifically, Chinese capital, given that country's clear strategic interests in Pakistan.

A coalition scenario with many of the same politicians, who have dominated parliament in recent decades, likely results in more of the same seen under the PML-N since 2013.

A coalition with a strong voice for the PTI, or at least answerable to a PTI agenda, particularly after the Panama Papers saga, likely means a greater focus on anti-corruption which, in the long term, could be very positive.