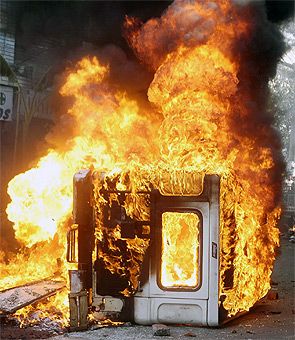 Indian intelligence agencies have often claimed that left-wing extremists are trying to make inroads in the militancy-hit regions of the north-east to foment further unrest.

But Jaideep Saikia, noted terrorism and conflict analyst, claims, "People who speak of Maoism taking roots in the north-east have not read history."

Saikia, author of Terror Sans Frontiers, explains to Vicky Nanjappa why Maoism will not be able to gain a foothold in north-east.

There has been talk about Maoists making inroads into the north-east, especially Assam. What are your views on the issue?

First of all, I do not think that ethnic insurgent groups in the north-east would ever give up their turf to outside groups. In fact, they would resist it.

I believe that alliances and arms-trading, with attendant aspects like training, base-sharing, conduit to China and even joint operations, are not tantamount to establishing robust ground inside the north-east. Some of the realities that are present in central India, where left-wing-extremism is flourishing, are not evident in even an unrest-ridden milieu like the north-east.

While rampant corruption and poor infrastructure, particularly in the rural areas, pervade the region, much of the ire is trained against non-north-easterners.

Therefore, not only are conditions -- including the fact that poverty and man-on-man exploitation -- are not as all pervading and ingrained in the north-east as it is in areas like central India where Maoism has taken strong roots, but a sense of social justice continues to characterise the region.

In most states in the region, there is an inner-line permit regime in place and outsiders cannot purchase or own land. This prevents land takeovers, which acts as a protective mechanism against outside control. Besides, there are no large land-holdings in Assam, as is the case in, say, Andhra Pradesh or Bihar.

So, even if there is land alienation -- as was the case during the crisis last year in the Bodoland Territorial Autonomous District areas  in Assam -- it is primarily because of the ingress of illegal migrants from Bangladesh.

Another reason why Maoism will not be able to gain a foothold in the north-east is because of Christianity, which is the primary religion among almost all tribes of the region, barring the caste Assamese, a few Bodos, certain Bengalis of Assam and Tripura, who are Hindus, and the animistic religious communities of Arunachal Pradesh.

Although certain tribes of central India also have Christianity in their midst, the fact of the matter is that the socio-economic conditions that prevail in the region have led them to embrace Maoism, which in my opinion is actually tribal insurgency, a phenomenon that had characterised the area even during the days of the British, with rebellions such as the Santhal uprising in the 19th century.

It may also be recollected that the Naga insurgency broke away from the clutches of the Chinese because they were unwilling to replace 'Nagaland for Christ' with communism.

He had said. 'Christian Nagaland had no place for a communist revolutionary ideology. If great Russia and mainland China are proud to feel that they follow the ideology of the German Karl Marx, tiny Nagaland is happy to be a follower of Jesus Christ, whom we have come to believe in as our saviour.'

People who speak of Maoism taking roots in the north-east have not read history.

Even tribal groups that have a natural affinity to central India have shown little interest in the ‘dictatorship of the proletariat’. They are either in a surrender mode or have been arrested for graduating into contract killing. Maoism means little for them in the Assam scenario. Clearly they had gone for training with the Maoists in order to acquire muscle against the neighbours that had come into conflict with them, as both groups struggled for space.

The hardcore Maoists of Dantewada and thereabouts -- where the tribals trained -- did not fathom their real objectives. Indeed, many Adivasi (tribal) cadres surrendered to the authorities after their return. Adivasi sentiments in Assam are locally placed, and even a stray incident that resulted in the unfortunate humiliation of Laxmi Oraon (who was stripped and humiliated on the streets of Guwahati during a demonstration by Assam’s tribal community) has no connection with the commune.

Indeed, the Adivasi lady was approached by the All India United Democratic Front headed by Badruddin Azmal to contest elections.

The Adivasis approached the Maoists only because they felt there was social affinity -- they belonged to the same stock.

But once they returned to Assam, they realised that they could not impose the ideological training that they were imparted by the comrades on their people in Assam.

The phenomenon is exactly at par with what became of certain indigenous Assamese Muslims who had gone to train in Pakistan Occupied Kashmir. The Assamese Muslims came back and surrendered to the authorities. On being questioned about the reason, they said they had gone to train so that they can come back and aid their Muslim brethren in Assam. Instead, their foreign masters had pressed them to assassinate senior national leaders and attain shahadat (martyrdom) by getting involved in suicide terrorism.

Such instructions meant nothing for the indigenous Muslim community in Assam, and being disenchanted, they returned to the mainstream.

Intelligence reports by security agencies have indicated that Maoists have joined hands with terror outfits such as the Indian Mujahideen. Is that the case in Assam as well?

If agencies such as the Intelligence Bureau have reports about links between Maoists and the Indian Mujahedeen, then they must be accurate, although I am baffled at the manner in which two ideologically opposing banners are coming together.

I have always maintained that Maoists, or for the matter any outfit fighting against the Indian establishment, seek "alliance" with another anti-India organisations only by way of expediency. These are marriages of convenience. The talk about Maoist inroads into the north-east and Assam is precisely that.

True, the People's Liberation Army of Manipur has gone into a tactical agreement with the Maoists -- I have seen the video clipping of the press conference that ‘commander-in-chief’ of People's Liberation Army Manohar Mayum gave in Somra Tracts of Myanmar in 2008. But, the alliance has not made any headway save a few PLA (Manipur) insurgents visiting central India.

Anecdotal reports have suggested that Koteshwar Rao and another Maoist leader had visited the general headquarter of the United Liberation Front of Asom in Bhutan -- but that could have been only before Operation All Clear in December 2003.

I am quite certain that Islamist groups such as Harkat-ul-Jihad-al-Islami, Jama’atul Mujahedeen Bangladesh and Ansarullah Bangla Team have no truck with the Maoists.

These Islamist outfits are operating in the Assam-Bangladesh border and are utilising Lower Assam as a gateway for operations in the rest of India.

However, the Maoists have visited north-east insurgent groups such as National Socialist Council of Nagaland-IM and ULFA in Bangladesh for arms.

You would remember the arms haul in Chittagong on April 2, 2004, which eventually armed an entire brigade of the Bangladesh Army after it was recovered. The main consignees were Paresh Baruah of ULFA and Anthony Shimray of the NSCN-IM.

A large part of the arms were for the Maoists. But I reiterate the fact that such agreements are only marriages of convenience and it cannot be said that Maoists are making inroads in north-east.

But there have been fears about Maoists making their presence felt in the north-east.

The apprehension of a few cadres does not mean that Maoism is steamrolling into Assam or the north-east. In a non-industrialised milieu, where religion and social egalitarian standards are important drivers, Maoism will not thrive. Alongside such conditions, space is an important component for Maoism to grow. Every inch of land in the north-east already has an indigenous movement with well-focused localised objectives.

Why is the government tom-tomming reports about Maoist inroads in Assam and Arunachal Pradesh?

We must listen to the people and agencies that matter. Recently, a very important functionary in the Government of India, who I do not wish to name, and one who is really in-charge of the issue, told me in no uncertain terms, when queried about Maoist inroads into Assam, that "Assam is not in our scheme of things".

He also told me that "there is a tendency to expand the scope of the problem so that they (state governments) can get central funds." I think that explains the reason about the tom-tom. Let us forget the ones who seek "Maoists" in Assam for vested interests.

Maoists are known to either fight for or exploit the cause of the downtrodden. How do you see them operating in the north-east?

Maoists would like to fish in troubled waters and there is enough muddied water in the north-east. But as I have said, it is almost impossible for them to take roots in the region.

There are people in high places who have said that movements such as the Krishak Mukti Sangram Samiti and (RTI activist) Akhil Gogoi have connections with the Communist Party of India-Maoist, but I believe that such allegations are unfounded and without any basis.

Charges such as these push people towards militancy. A welfare State such as India must comprehend the mechanism of a safety valve and embrace peaceful, democratic protests, instead of attempting to club such movements under the rubric of militancy.

What role could countries like Bangladesh, China or Pakistan play in the Maoist game-plan?

I have already explained the role of the Maoists as a non-issue in the north-east. But, an enemy’s enemy is a friend and all anti-India forces would -- despite ideological similarities or dissimilarities -- encourage a group that is engaging New Delhi.

But as a parting shot, I must state that Maoism in India is primarily a 'tribal insurgency' and 98 per cent of the cadres have taken up arms only because we have pushed them to the edge.

The problem would never have taken such a magnitude if we had ensured an egalitarian society and an acceptable social justice system. The manner in which the people of central India have been deprived of their rights stands at the heart of the problem.

It is a great pity that New Delhi has chosen to address the problem primarily by utilising security forces when it could have adopted steps to redress matters in a way a welfare State such as India is perfectly capable of.

For instance, the government could have implemented the provisions of the 5th and the 9th Schedules of the Indian Constitution.

Image: An ambulance set on fire by an angry crowd at a blast site in Guwahati. The blast was triggered by secessionist militants ' Photograph: Utpal Baruah/Reuters