'A number of facts are still left unaddressed by the Supreme Court judgment.'
'I think there are enough grounds for an inquiry to be ordered.' 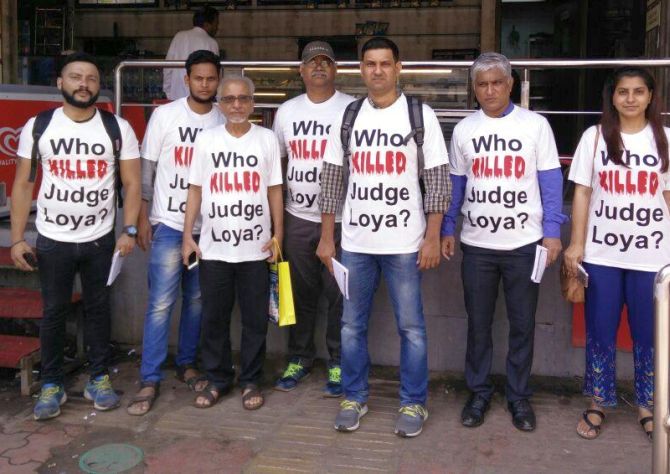 On April 19, 2018, the Supreme Court dismissed pleas seeking an independent probe into the death of special Central Bureau of Investigation judge B H Loya, ruling that the judge died of natural causes and the petitions were a 'serious attempt to scandalise and obstruct the course of justice'.

The pleas in the case were filed after an investigative report published by Caravan magazine (external link), which claimed that Judge Brijgopal Harkishan Loya's family suspected foul play in his death.

"These are the signs that we are living in a democratic society," Bal tells Rediff.com's Syed Firdaus Ashraf.

What is your first reaction to the Supreme Court judgment not to inquire into Judge Loya's death?

I have read the (114 page) judgment quickly, but will read it in detail later. On first reading, I can say I am not satisfied by the conclusion of the judgment.

I think a lot of facts that were brought to light by Caravan have not been considered in this judgment.

Caravan published 22 reports on Judge Loya's death; some being detailed investigative reports. As an editor, do you see the judgment as a failure?

We have done our job. Journalism does not begin or end with the courts. That is where the law ends.

Our job is to keep doing it and if there are new facts we will continue to look for them.

If the Supreme Court feels that these facts do not merit an inquiry and we feel that maybe there is a lot more to the story, then it is our job to continue to look for things that will convince the Supreme Court.

I feel there is enough ground for an inquiry so obviously I am in disagreement with the conclusion of the Supreme Court. They have formed their own opinion.

We have done 22 stories on the basis of which I have formed my opinion factually, so there can be a disagreement.

I do not want to get into the observations of the Supreme Court.

What is the Judge Loya case? Judge Brijgopal Harkishan Loya presided over the Central Bureau of Investigation special court in Mumbai and was hearing one of the most high-profile cases in the country, involving the alleged encounter killing of Sohrabuddin Sheikh in 2005.

The prime accused in the case was Amit Shah -- Gujarat's minister of state for home at the time of Sohrabuddin's killing, and the Bharatiya Janata Party's national president at the time of Judge Loya's death.

On December 1, 2014, Judge Loya died in Nagpur, where he had travelled for a colleague's daughter's wedding. Subsequently, his sister Anuradha Biyani raised questions about the circumstances surrounding his death.

The issue has become a Congress versus BJP one.

That is not our concern. Our job is journalism.

I think a number of facts are still left unaddressed by the Supreme Court judgment. I think there are enough grounds for an inquiry to be ordered or asked for.

Caravan published a report by Dr R K Sharma, former head of the forensic medicine and toxicology department at AIIMS, in which he said there was a possibility of trauma to the brain or death because of possible poisoning.
What was the Supreme Court's observation on this?

The Supreme Court has made an observation that the Maharashtra government filed a letter by R K Sharma, saying he has been quoted out of context, that wrong conclusions have been drawn.

We have already done a story when these documents were first filed before the Supreme Court that what R K Sharma is stating does not stand the scrutiny of evidence.

Even today, I have reproduced that story and the WhatsApp interaction between R K Sharma and our reporter.

Now for him to turn before the Supreme Court in a statement is the very reason we are saying an inquiry is necessary.

There is a discrepancy with the evidence in our hands, and what he is claiming before the statement to the Maharashtra state police, which can't be correct.

This is why an inquiry is needed so cross-examination is possible, affidavits are filed.

This cannot be dismissed at the level of a discreet inquiry of the Maharashtra state intelligence department.

The Supreme Court judgment, it appears, relies heavily on the versions by Judges Kulkarni and Modak who were with Judge Loya when he died. The court accepted their version that Judge Loya died a natural death.

I want to say something in that regard from a realistic position.

I think there was a need for an affidavit to be filed and cross-examination of the judges to be held because there are discrepancies and differences between the judges' submissions.

From day 1, Judge Loya's son Anuj Loya has been saying there was no foul play.

Initially, when we reported the story, Anuj said if something happens to him or his family, he will hold the chief justice of the Bombay high court responsible.

It is much after the story was published that Anuj supposedly retracted his statement.

There was a press conference which you saw for yourself and you can draw your own conclusions.

How much merit will you to give to a press conference where a lawyer was speaking on his behalf?

What about Judge Loya's sister? Has she reacted?

You can check The Print's story where Judge Loya's sister Anuradha Biyani says she has lost hope (external link).

What does this judgment mean for our democracy?

The possibility that such stories can be done and the Supreme Court considers the cases and we continue to keep doing journalism. These are the signs that we are living in a democratic society.

There can be differences about the judgment, that is part of our democracy.

We can disagree on factual grounds with an argument made by the Supreme Court. That is also part of a democracy.

We feel if we continue to do our work, maybe we will be able to change the mind of the Supreme Court if more facts are brought to bear. I think this is an ongoing process.

I don't think we see it as a defeat of democracy, rather this is a part of the democratic process.

Are you still hopeful?

It is not my job to be hopeful or not be hopeful. We will continue to do journalism.

On Judge Loya's death, we do feel there are important facts which still remain unanswered.

There may be other facts that we need to examine and that is part of our journalistic duty, which we will continue to do.