'The most serious issue is that of shooting a lawyer in the chest. That news has been buried.' 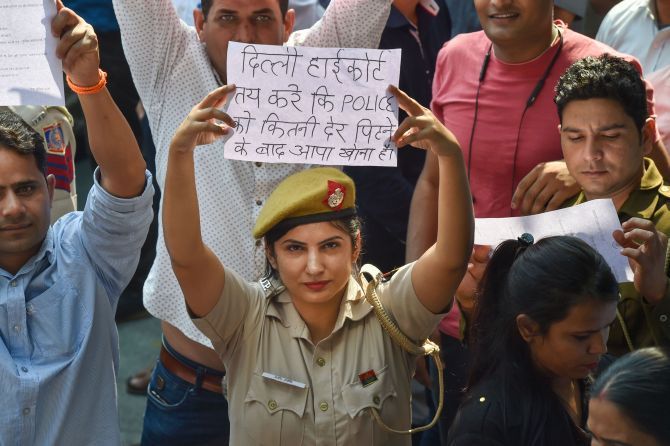 IMAGE: A Delhi policewoman displays a placard during a protest against the alleged incidents of violence against the police by lawyers in New Delhi on November 5, 2019. Photograph: Manvender Vashist/PTI Photo

Thousands of Delhi police personnel came out on the streets skipping work on Tuesday to protest against lawyers thrashing policemen after a scuffle broke out over a parking issue outside Tis Hazari court complex in New Delhi last Saturday. November 2.

At least 20 policemen and eight lawyers were injured in that clash in which 20 vehicles were vandalised.

On Monday, a video of a few lawyers thrashing a policeman outside the Saket district court surfaced on social media.

In it a lawyer was seen slapping the cop and hitting his bike with a helmet while the latter was leaving the site.

"We have issued a notice to that lawyer. He will be suspended in 48 hours," Bar Council of India Chairman Manan Kumar Mishra tells Rediff.com's Syed Firdaus Ashraf.

What is happening between Delhi lawyers and policemen? Why did the policemen go on a strike?

Whatever the Delhi police is doing is not right. Today, this dharna(staged) by them is shameful. I condemn that.

And whatever the lawyers did yesterday (the incident outside Saket court), the Bar Council is working on it.

The police, on the other hand, has not so far arrested the policeman who shot at one lawyer, and this is shameful.

But it has not been reported that a policeman shot at a lawyer, injuring him.

Instead, they are making the public feel that the police is the victim. This is very sad.

Can you give some details of the alleged shooting incident?

That lawyer who was shot is in hospital even now. He was shot in the chest. There are eyewitnesses too.

Delhi high court judges too went and saw that lawyer in the hospital.

What action has been taken after that?

Because of this incident, the high court has ordered a judicial inquiry. They handed it over to the CBI (Central Bureau of Investigation), the IB (Intelligence Bureau) and the Vigilance (Department) and took the Delhi police out of this case.

But the police wanted to dismiss this case of shooting. So they were launching false cases against lawyers.

The high court understood this and took away the investigation from the Delhi police.

In social media videos it can be seen that a cop is getting beaten up by the lawyers.

The police can manufacture anything on social media.

But it can be clearly seen that the police are getting beaten up.

Why can't you get the video in which the police shot at a lawyer? That too they must have recorded.

And that lathi-charge on lawyers? That too must (have been) recorded. But they are not showing those videos.

They have also beaten up a lawyer inside the lock-up and he is half dead. The police are not showing that video too.

If that lawyer is half dead, where is he now? How is he? Nobody is talking about him in the media.

We are talking, but the media is not raising the issue of this lawyer. Today some media persons have come to take our views and that too when the policemen have sat on dharna.

The most serious issue is that of shooting a lawyer in the chest. That news has been buried. The police is very powerful.

It was a very minor incident of parking that led to this face-off, isn't it?

The khaki uniform is very powerful. They have pistols, dandas, and the police force.

The issue was only of how can a lawyer park his car in front of a police lock-up. They could not tolerate this act of a lawyer.

Didn't that lawyer park his vehicle in a no-parking area near the police lock-up?

He had to attend an urgent hearing so he parked his vehicle in his urgency. His vehicle was broken and badly damaged after that.

The lawyer was picked up and beaten badly in the lock-up. The media is not showing all these facts.

The news coming out of Delhi is that policemen are bechara (helpless) victims.

Police personnel are being projected as victims whereas the fact is that they are not. The media is giving them more importance.

Police are not becharas, lawyers are becharas.

During a court hearing, Kanhaiya Kumar was also beaten up in court by lawyers and they indulged in vandalism too.

I don't want to comment on that case now. The fact is no media house dares to call police goondas.

No media house says the police has committed a crime. The media's role is dubious.

But you can file a case against the police, why haven't you done so?

Who lodges a first information report in any case? It is the police. Will they lodge cases against themselves?

It was only after the high court intervened that they took action.

Is the video of a policeman on a motorcycle being slapped by a lawyer fake?

We have issued notice to that lawyer. He will be suspended in 48 hours.

Why can't this issue be resolved amicably?

The crime that has happened (of the police allegedly shooting at a lawyer) falls under Indian Penal Code Section 307 (attempt to murder) and Arms Act, so how can it be solved amicably?

It is not compoundable and there has to be punishment. How can we resolve this issue?