'Sometimes we use political pressure and sometimes political acumen to get what we want.' 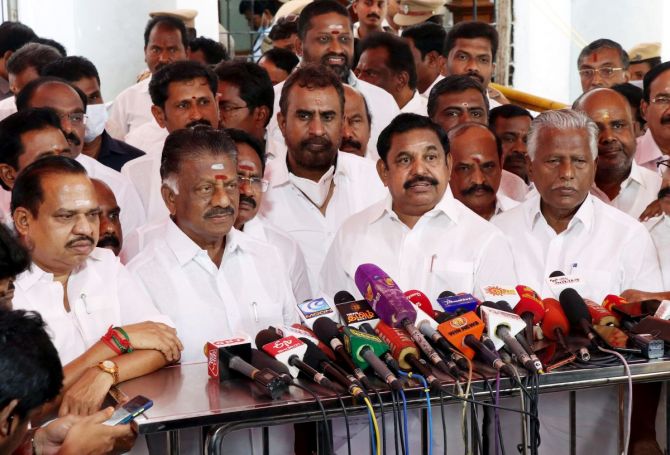 After a gap, a demand that the All India Anna Dravida Munnetra Kazagham be led by a single leader emerged again in the AIADMK on Tuesday, June 14, 2022, PTI reported.

Senior AIADMK leader and former minister D Jayakumar told a party meeting in Chennai that a majority of district secretaries and top office-bearers underscored the need for unitary leadership. The party would take a decision in the due course on who should lead the party, he said.

Briefing reporters on the deliberations at a meeting of district secretaries and senior functionaries, Jayakumar said nothing was 'discussed today' about who should lead the party.

The voices pushing for a single leadership comes just about 6 months after the AIADMK amended its bye-laws to strengthen norms to retain the present leadership structure of top two positions held by O Panneerselvam (Coordinator) and Edappadi K Palaniswami (Co-coordinator).

Pointing to 'changing times,' Jayakumar said be it cadres or party functionaries, all of them were for a single leadership.

"There is a huge support for it. What happened today was exchange of views." The single leadership was one of the subjects discussed in a 'healthy' way, he said.

Led by Panneerselvam (OPS) and Palaniswami (EPS), the consultative meeting was held at thE party headquarters, Puratchi Thalaivar MGR Maaligai. While the meeting was on, which went on for about four hours, supporters of both OPS and EPS raised slogans outside urging that their respective leaders should lead the party.

A party release said the meeting steered by the top two leaders revolved around the 'resolutions' to be adopted in the party's general and executive council meetings on June 23, 2022.

Since 2019, supporters of EPS and OPS have time and again indulged in 'poster wars', pitching in for their respective leaders. After losing power last year, the AIADMK picked EPS as Leader of Opposition in the Tamil Nadu assembly and OPS was named Deputy Leader, which yet again demonstrated Palaniswami's clout in the party.

On and off, the question of 'single leadership' for effective functioning of the party has been a contentious point of discussion in the AIADMK after the death of late party supremo J Jayalalithaa in 2016.

The AIADMK's Madurai strongman V V Rajan Chellappa had in 2019 batted for a single and charismatic leadership, seen as support for EPS.

Asked if the single leadership matter would be formalised before or on the day of party general and executive council meeting, Jayakumar said 'that is all suspense.'

The single leader chorus also comes against the backdrop of an aggressive BJP under the leadership of its state president K Annamalai targeting the DMK regime over several issues. It is also seen as a factor for the AIADMK to assert that it is the main Opposition be it inside or outside the assembly.

Rediff.com's A Ganesh Nadar quizzed AIADMK Spokesperson Kovai Sathyan, below, left, about the clamour for a single leader in his party and speculation about the AIADMK's unease with its electoral ally, the Bharatiya Janata Party.

There is a wave in support of a single leader in your party. Could you enlighten us on this?

It proves that the AIADMK is a democratic party. The district and headquarter secretaries came together to discuss the 23rd June general council meeting.

They were asked to give their opinion. Each gave his opinion. That's where the single leadership issue came up. They said we should explore that option also. It was a democratic discussion.

What kind of resolution can we expect on June 23 at your party's general and executive council meetings?

OPS and EPS were elected unopposed as the party's co-coordinator and joint-coordinator. What happens to that now?

At the 2017 general council meeting it was a unanimous decision that Amma (J Jayalalithaa) will be the eternal general secretary of the party.

The general council created the post of co-coordinator and joint-coordinator to ensure smoother running of the party.

The power is with the general council to enact any such post for the betterment and functioning of the party.

When you read the newspapers in Chennai, you find the BJP's Tamil Nadu President K Annamalai's views expressed almost every day while your leaders OPS and EPS's views don't feature regularly.

Both leaders are doing, it but the media downplays it. They don't want to cover the principal Opposition that is the AIADMK.

The media has blacked out the AIADMK. Are they threatened by the ruling party or by somebody else?

It is the aspiration of any state leader to prove himself to his national leaders and the people. Our duty is only to the people. He can take credit for himself, but the credit has to come from the public.

What about AIADMK Organisation Secretary C Ponnaiyan's comments on the BJP?

He clarified that they were his personal opinion. He said we have different ideologies, but came together for the welfare of the state.

When the ruling party at the Centre is with us, we get benefits.

He was just pointing out the difference between the BJP in Tamil Nadu and the BJP in Karnataka on the Mekedatu issue.

Do you accept that things between the AIADMK and BJP are not okay?

We have always stood by the people of Tamil Nadu where the welfare and rights of the people are concerned.

Whether it concerns the two language issue, the Cauvery Tribunal, reservation for NEET (for government school students). These are differences we had with the Centre ruled by the BJP. It has nothing to do with the state unit.

We have never allowed communal tensions to escalate which can cause harm to society. 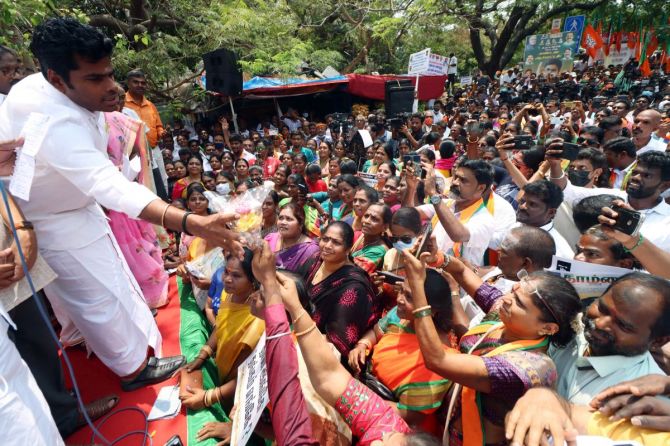 What are the friction points between the AIDMK and BJP?

We don't have any friction points. Sometimes we use political pressure and sometimes political acumen to get what we want.

The BJP has its own ideology. It has not led to friction points.

When the farm bills came out, there were protests in Delhi, but not in Tamil Nadu because the farmers here can sell their products anywhere.

Do you think it was a mistake to tie up with the BJP?

It was the need of the hour. Time decides the task in front of you. The task was to defeat the DMK.

The DMK has been in alliance with the BJP in the past.

Will the AIADMK-BJP alliance break up?

The call is taken by the leaders. We have 100% faith in our leaders. We will follow what our leaders tell us to do. They will take a call at the right time. 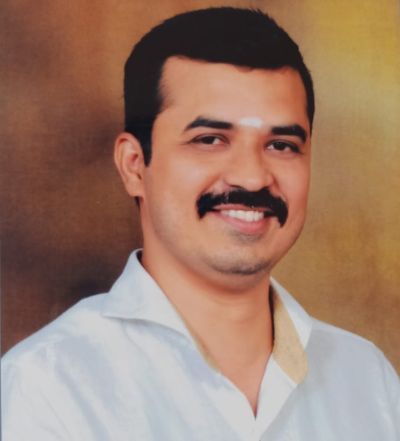 If Amma was alive today, whatever decision Amma would have taken, our leaders today are taking the same decision.

Is the imposition of Hindi one of the friction points between the AIADMK and the BJP?

Language was a friction point since the time of the Congress in the central government.

They (the BJP) are saying that the third language is optional. We are okay with two languages. Hindi cannot be imposed on us.

Do you think the BJP can grow in Tamil Nadu?

Any party, whoever is in public life, people have to see the party, know their ideology and then decide to follow them.

It is up to them. Their course of action will decide that.

Political observers say that if the BJP wants to grow in Tamil Nadu, it will have to be at the AIADMK's expense.

Think national, act local. We have demonstrated that we are far ahead of them in ideology.

For example, for enrolment in higher secondary education, the national level target for 2030 was 25%, but we already have 49%.

In human development and the health sector, we are above the national average.

Though you are the much bigger party in this state, do you think the BJP has a big brother attitude as they are in power at the Centre?

I wouldn't say that as far as the Tamil Nadu BJP is concerned. I am sure Annamalai knows that.

In Tamil Nadu it is the Dravidian parties that are the big boys.