'In today's situation, it is not going to help anyone's case if they try to politically contest with the BJP on ideological issues.'
'Instead, it is best is to swim along the tide, present the more acceptable face of the cultural Hindu, but not be a political Hindu as the BJP or Mr Modi is.' 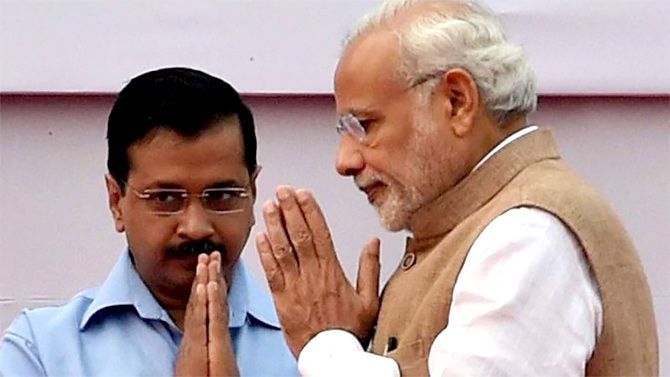 The Narendra Damodardas Modi versus the Arvind Gobind Ram Kejriwal that began during the 2014 general election saw the two politicians lock horns in a David versus Goliath battle in Varanasi.

The result was inevitable: Goliath won.

The reason behind this, Nilanjan Mukhopadhay -- senior journalist and author of Narendra Modi: The Man, The Times and The RSS: Icons Of The Indian Right -- tells Savera R Someshwar/Rediff.com, is that Arvind Kejriwal has proved himself a quick learner.

What message does the Delhi verdict send Mr Modi?

The Delhi verdict is the third major setback for Mr Modi in the last nine months after he got re-elected in May last year.

The biggest message this verdict has sent him is that the national issues he has been focusing on in state elections are not resonating with the people.

The people, as far as state assembly elections go, are looking at local issues.

There is also an additional worry for the BJP that, along with these local issues, they are also beginning to look at bread-and-butter issues, which are just not local but have huge national significance as well.

And if it is not addressed by the government, then the entire political script can begin to go awry for Mr Modi.

Has Mr Kejriwal's win in Delhi given the Opposition a template by which to stop Mr Modi? If so, what does this template contain?

After Mr Modi became prime minister in 2014, Mr Arun Shourie had labelled the NDA government as 'a Congress government plus a cow'.

In many ways, Mr Kejriwal has given a government and run a campaign which is Modi minus Hindutva.

In his 2019 campaign, Mr Modi harped on micro economic deliveries, gas cylinders, electricity connection to the last mile, deliveries of subsidies, bank accounts -- all these are cited by the Modi government as major successes.

The only thing which is different between them is that while Mr Modi had a larger hyper-nationalistic narrative spun around the twin events of Pulwama and Balakot, Mr Kejriwal doesn't have it.

The BJP failed to draw him into the arena as far as the issue of polarisation was concerned.

He was very smart in sidestepping the issue of Shaheen Bagh by saying it is a national issue which needs to be tackled and discussed at the national level, but it is not relevant as far as the Delhi elections go.

This was politically very savvy.

As far as your first question is concerned, does he give a model?

Well, there is a model, but it isn't one where he politically contests within Mr Modi's template.

In today's situation, it is not going to help anyone's case if they try to politically contest with the BJP on ideological issues; instead, it is best is to swim along the tide, present the more acceptable face of the cultural Hindu, but not be a political Hindu as the BJP or Mr Modi is.

So, with Mr Kejriwal, we had this spectacle of him reciting the Hanuman Chalisa.

Now, being religious does not disqualify a person from being secular, which is the same template that was used by Mahatma Gandhi.

The challenge for a government or a leader like Mr Kejriwal would be that, if he ever gets into a position where he can start influencing the policies of the country, does he have the inclination and does he have the sagacity to roll back many of the corrosive decisions which have been taken since 2014?

Will he accept that the insides of the nation have been badly eaten up by several divisive policies of the BJP since 2014?

These are hard questions and Mr Kejriwal has not revealed his mind.

So while he provides a model to defeat the BJP electorally, I cannot say at this stage if this is a political alternative for our nation or not.

Do you see Mr Kejriwal remaining confined to Delhi or will he move beyond Delhi?

Today, he has shown himself as an astute leader who has understood that he made a mistake by trying to spread out too fast, too much and too soon.

I think he is going to limit himself in this tenure, look to consolidating himself in Delhi and making the Aam Aadmi Party a long term political party of governance in Delhi.

Mind you, this is the second election in which he has ended up with a vote share of more than 50 per cent.

Mr Kejriwal has to ensure that the Aam Aadmi party continues in Delhi just the way Mr Modi ensured the permanence of the BJP in Gujarat.

Once he does that, once he feels that the Aam Aadmi Party can survive in Delhi minus Arvind Kejriwal, I think he will start looking outside, just the way Mr Modi did 2012 onwards.

That was when Mr Modi felt that, regardless of whether he stays in Gujarat or goes outside, two things were guaranteed.

One, the Gujarat BJP unit would remain in his control and, second, even if he stepped outside Gujarat, the BJP would not lose power in the state.

And that is exactly what happened.

The BJP won the 2017 election, though a bit narrowly.

They did have a scare, but they survived it because of Mr Modi's charismatic leadership.

Arvind Kejriwal will have to reach the same point in Delhi. And I do not think this will happen within the next two or three years.

I would expect him to wait out the 2024 -- or the next -- Parliamentary election, whenever it is held, as a state leader. And then, after he has secured one more tenure for the Aam Aadmi Party in Delhi, one can expect Mr Kejriwal to branch out.

If he does it immediately, I see a huge risk.

What did the BJP do wrong in Delhi, considering that they threw everything they had at Kejriwal?

They did everything wrong.

After all, the BJP is historically very powerful in Delhi, right from the Jan Sangh days in the 1950s. It has controlled the municipality (for the last 12 years and, for the fourth consecutive time, won the municipal election which was held in 2017); it formed the first government in 1993 with Madan Lal Khurana as the chief minister.

Mr Modi then pointed out that the BJP's Delhi unit had too many factions and that they did not have a good leader.

Now, since he had provided the diagnosis, it was up to him to provide the solution as well. After all, he and Mr Amit (Anilchandra) Shah have been the leaders for the last six years.

But, in the last six years, the BJP has not been able to resolve the two big issues which the party faced even in 2013.

One is that there is a lack of critical single face in the party in Delhi (for the post of chief minister) and, secondly, the Delhi unit is divided into factions.

This is possibly the biggest failure of Mr Shah as the BJP president, that he has not been able to set the BJP's house in order in the national capital.

How will this change the Modi-Shah strategy for the forthcoming Bihar election?

They can't change because they are not in the driver's seat.

Nitish Kumar is in the driver's seat.

They have already conceded the leadership to him and he is not going to drive down a dirty, vitriolic path; he is going to be as inclusive as he can because he wants to retain his base among the other sections of Indian society.

He wants to regain some of his Muslim support also, which be very daunting task for him.

But he's definitely is not going to allow any kind of vitriolic behaviour.

I think Mr Nitish Kumar is going to bargain very hard. I will not be surprised if he names BJP leaders who he does not want to be present during the campaign in Bihar.

Mind you, he has stated in the past that Mr Modi is not to be allowed to campaign in Bihar.

Now, while he may not do it with Mr Modi, he may definitely bar some of the other motormouths of the BJP.

I don't know. It is for Mr Nitish Kumar to take the names of those he doesn't want to campaign for him because it could cut into his space.