'There was outside intervention which is what led to the initial violence.'
'Once the violence started, there was a brutal lathi-charge by the police.' 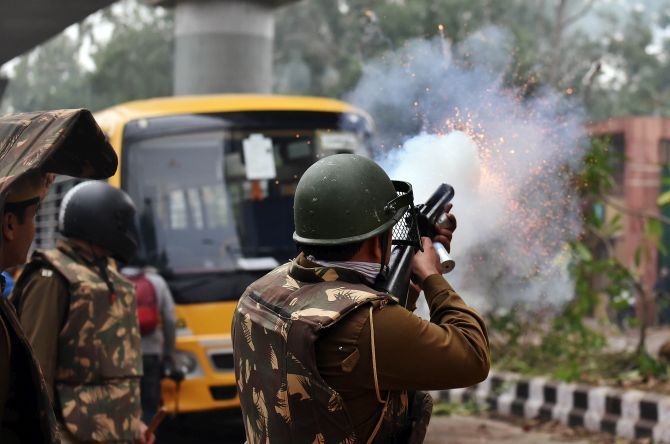 Yogendra Yadav, national president of the NGO Swaraj India and a member of the Swaraj Abhiyan, went to Jamia Millia Islamia University on Sunday night soon after trouble broke out between students and the police, to de-escalate the violence that was spreading fast following protests against the Citizenship (Amendment) Act.

By the time things settled down, more than 50 students had been injured in the violence.

Many Jamia students were detained by the police for violating law and order and for destroying public property.

As soon as this happened, students from different universities came out on the roads to protest against the detention of Jamia students and asked for their release. The students also gheraoed the Delhi police headquarters to demand the release of the students.

The situation came under control only after the students were released.

"The police were chasing students in libraries, hospitals and toilets and beating them up mercilessly," Yogendra Yadav tells Rediff.com's Syed Firdaus Ashraf.

The fire over the Citizenship Amendment Bill/Citizenship Act is spreading fast and doesn't seem to stop. It seems there is too much of anger against the legislation.

CAB is to our society what demonetisation was to our economy, which is to say there was no problem, but a solution was attempted.

So we have a drug for a disease which didn't exist in the beginning. And the drug has caused more damage than the disease was supposed to. Exactly, yeh ho raha hai (This is exactly what is happening).

The government initially thought that it would be only Muslims and Muslim institutions (to protest), what they did not understand was this would spread to youth across the country. That it would have the entire north east up in arms.

When the legislation could be challenged in the Supreme Court, why resort to street violence?

This is a political measure which society is protesting against and saying why are you imposing such policies?

Although this is a completely unConstitutional measure, will it be thrown away by the Supreme Court, we don't know.

You were at Jamia University on Sunday night. What did the students you spoke to say about their fears over the Citizenship Act?

Last night, I didn't speak to them about CAB as they were injured and in hospital. We were only concerned about their security.

Home Minister Amit Shah told Parliament that the new law has nothing against Indian Muslims, but is only about giving Indian citizenship to persecuted minorities of Bangladesh, Pakistan and Afghanistan. So people are wondering what is there to protest and why is there apprehensions in the Muslim mind?

People are wondering because people don't read the letter of the law.

And the text of the law clearly makes a distinction between Muslims and non-Muslims.

After that, you cannot say 29 things and say don't worry and you have nothing to worry and so on.

The court will not go by Amit Shah's oral assurance, they will go by the letter of the law. And the simple fact is that -- to which no one has responded and no one can respond -- this is the first time in the history of India that the citizenship of the country is being linked to religion.

Is that not the case? It is a very open issue. This is the fact. The law singles out Muslims and puts them in a secondary category. This is a fact.

Now you can debate what would be the consequences for Muslims today or tomorrow. Once such categorisations starts, it violates the fundamentals of what the country is.

And once such a distinction is accepted and inserted in law, it is then used for all kinds of things.

This is what Muslims fear and to my mind, this is a perfectly legitimate fear.

My own sense is that the violence began with the intervention of some outsiders.

I don't know about the identity (of the outsiders), all kind of theories are floating and it is not correct to say who (they were).

There was outside intervention which is what led to the initial violence. And that is probably to be determined by some fact finding (committee).

What we know is that once the violence started, there was a brutal lathi-charge by the police.

This was not simply dispersing the crowd, they were going after the students who were clearly unarmed and defensive. The police was chasing students in libraries, hospitals and toilets and beating them up mercilessly.

There must have been some reason for the police to do There was stone-throwing from the students's side and we saw on social media that anti-Hindu slogans were raised by some students.

I would be very happy if someone would give me a believable clip. All these things have turned out to be a lie.

I have been at many meetings and I have never heard any such slogans.

Because you are from the media, I would really urge that please think twice before believing (these videos).

The minimum responsibility is to check complete fake things like 'Bharat tere tukde hongey'. This has never been uttered and (there has) not (been) a single evidence so far, but it is talked about.

Stone pelting, to my mind, did take place. It took place from the students and from the police. We have evidence of both on video footage.

The difference is the police is in uniform. They are in riot gear. They have helmets and they have protection. They have training. They have certain norms of conduct.

The police cannot say 'isney mujhe maara, mainey usey maara (He hit me, I hit him)'. That is not what the police is supposed to do. Otherwise hand out the country to the goondas and they will sort it out themselves.

Prime Minister Modi made a speech in which he mentioned the clothes worn by the protestors.

Every time Prime Minister Modi says things you feel it is the lowest-ever statement made by the prime minister of India. He then proves you wrong within a few months by coming out with something new.

Of course, this is the worst stigmatisation you can imagine coming from the prime minister of our country.

Syed Firdaus Ashraf covers politics and national issues for Rediff.com. He can be contacted at firdausa@rediff.co.in.