IMAGE: The beach road on Chennai's Marina is a sea of youngsters and students participating in a protest to lift the ban on Jallikattu and impose a ban on PETA, January 19, 2017. Photograph: R Senthil Kumar/PTI Photo

The only word we hear in Chennai these days is porattam (protest)! 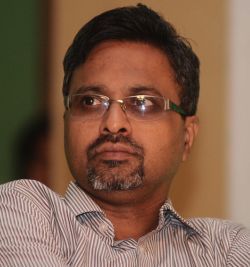 As the public porattam enters the fourth day, Professor A R Venkatachalapathy, left, a historian at the Madras Institute of Development Studies, tells Rediff.com's Shobha Warrier why the youth in Tamil Nadu have come out on the streets.

Did the assembly of thousands of people to protest against the ban on Jallikattu come as a surprise to you?

We knew there was resentment in the minds of people, but this was totally unexpected.

It is unprecedented, and the level of spontaneity behind such a mobilisation has surpassed the 2013 movement against the Sri Lankan issue.

By all accounts, it has also surpassed the mobilisation of people in the 1965 anti-Hindi agitation.

In 1965, there was a campaign and the DMK (Dravida Munnetra Kazhagam) was involved, but today, it is completely apolitical.

This is political in another sense because people have a sense of power and politics, but this is not affiliated to any political party.

This is also an expression of the cynicism of the younger generation and the middle class against the political system.

The resentment has been there for a very long time.

You mean Jallikattu was just a trigger and there were other issues that disturbed the people of Tamil Nadu.

Over the last couple of years, there has been considerable resentment in the minds of the Tamil people.

There is a perception that they have been sidelined.

Starting from 2009 during the last days of the civil war in Sri Lanka, when 27,000 non-combatants were bombed.

Nobody protested about it and the war criminals were not brought to book.

For the last 25 years the convicts in the Rajiv Gandhi murder case are in prison.

In the case of Cauvery water, a state (government) wilfully and repeatedly defied the Supreme Court order, but nothing has been done.

Then Mullaperiyar, where Kerala has taken a very antagonistic stand.

Demonetisation also is a reason for the anger.

The Pongal holidays were badly handled and though not deliberate, the people felt it was deliberate.

There is resentment among people and they are unhappy with a whole range of issues and Jallikattu became a flashpoint.

The biggest problem is the animal rights fundamentalism. There are even people who want to defend the rights of rabid dogs!

Do the Tamil people feel alienated?

See, alienation is a very strong word. But some letterhead NGOs take up issues of which they have no understanding and they are able to use the legal process to stop age-old practices.

It is not just that they are age-old practices; they are embedded in our culture.

When you stop such practices all of a sudden, it causes resentment.

I must say what the English media has completely missed is, what you see is not a one-point programme.

There are a whole range of issues behind this, which you may not see or hear now.

The new generation feels threatened and worried about their identity by the steamrolling effect of globalisation.

The protest that you see today should be seen as a symbol though many of them are not even participating in it. Their pride has been affected.

Do you think the rest of India does not understand how the people of Tamil Nadu feel?

The general feeling is that the people outside Tamil Nadu don't understand them. You can't sit in one corner of India and dictate what a small village in Tamil Nadu should do.

This may not be acceptable to these people.

Why ban a festival that happens in a small village where 100, 200 bulls run around? Can't you regulate it instead of stopping it?

Those who own the bulls look at them as a part of the family and an enormous amount of money is spent in the upkeep of the bull.

Do you think the owner of the bull will torture it? There are, of course, exceptions.

It is often the people who fight the bulls who get injured, not otherwise.

But what PETA is trying to project is, the mission of villagers is to wake up every morning and torture the bulls!

My view is that it can be very easily regulated and there was no need to ban it.

Remember, till 5 years ago, the Alanganallur Jallikattu was showcased by the Tamil Nadu tourism department as a spectacle.

The state had invested in this cultural event. This is not like the Spanish bullfight.

When you let simple things get out of control, this kind of fringe Tamil nationalist elements and ultra-leftist groups can exploit the situation and distort the movement.

There are also strong environmental groups actively behind this as they are deeply worried about how multinational organisations are making a mess of the native rice, native bulls and a whole range of other products. They fear all these are going to be extinct soon.

If so, will that happen in other states too because there fear is among the local people about native products going extinct and multinationals taking over?

But did anyone expect Jallikattu to cause this kind of an eruption?

Jalikattu has been part of the discourse. This has been reinforced not only in literature, but also in cinema and a whole range of media. It is not as if it's a bolt from the blue.

Do you blame the state government for not presenting the case properly in the court which has resulted in the ban?

I feel Udayachandran, when he was the collector of Madurai, put forward a wonderful affidavit. But there was no consistency in the policy.

Maybe a better legal counsel could have prevailed. Yes, it could have handled in a better way legally.

But the biggest problem is the animal rights fundamentalism. There are even people who want to defend the rights of rabid dogs!

The sight of some of the young men shouting for a separate Tamil Nadu has shocked many.

What happens is, when you let simple things get out of control, this kind of fringe Tamil nationalist elements and ultra-leftist groups can exploit the situation and distort the movement.

That is something people who value the unity of Indian nation, have to be careful about.

They should ensure that there is no scope for this kind of sloganeering.

What will happen to the movement after a few days?

This will fizzle out, no doubt about it.

I will not be surprised and that's how it should happen too.

By the time this would have made an impact, and you would not be able to go back.

Once the students' protests come to an end, the political parties will take over.

There will be a political solution and the judiciary will have to accept it.