'We need to understand that the perpetrators are right within us; they are not like the terrorists who come from outside.' 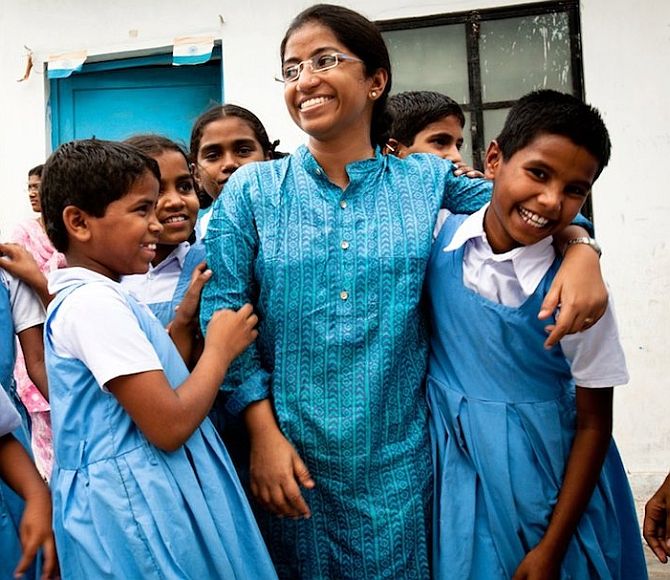 Even before we met, Dr Sunita Krishnan had warned me that she would stop the interview and run if she received a call to rescue a girl.

After all, the only mission in her life is to rescue girls from being trafficked.

When I met her at her office in one of the crowded lanes close to Charminar in Secunderabad, she was in the middle of attending numerous telephone calls.

The day had dawned with the news of a college girl getting gang-raped in a secluded house in Hyderabad where she had gone with her boyfriend. Our conversation was interrupted many times by calls.

Dr Krishnan is a gang-rape survivor herself. She was assaulted when she was 15. She fought the shame, fear and hypocrisies of society to start Prajwala, an organisation that rescues girls and women from trafficking. 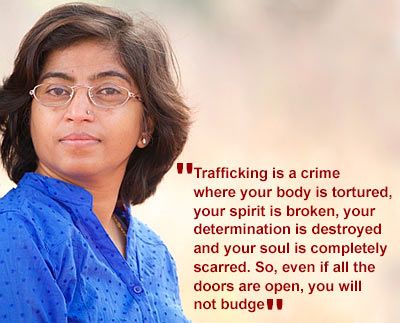 You have rescued thousands of girls from getting trafficked. Do you think poverty is the reason that drives women to such situations?

Poverty is not a reason at all. I completely disagree with the argument that poverty and impoverishment are the reasons for trafficking.

Though the reasons are multi-layered, it triggers from a situation of option-lessness which can happen in a very well-to-do broken family too.

A lonely child where husband and wife are fighting all the time can be as option-less as a child living in a labourer's family that is totally indebted and desperate to survive.

Both have the same sense of desperateness and both want to escape reality.

In such a situation, not everybody gets trafficked. It is a certain personality and certain situation that makes a person vulnerable.

Across the world, you will see that hardly any physical coercion is used to exploit a person. Nobody gets kidnapped. It is largely deception through fraudulent means.

Today, the master plan of trafficking happens in such a way that the person actually feels that she is conniving in the act of getting exploited.

The biggest problem in trafficking today is that the line dividing between 'I am part of the crime and I am a victim' has thinned down.

The victim feels less like a victim and more responsible for what has happened to her.

The whole thing is an act of deception.

The world doesn't realise that there are a huge number of organised criminals who are just looking around for vulnerable women. They are watching for the weak spot they can target.

Their modus operandi is to make you feel part of the crime in such a way that you will never say that you are a victim.

What happens when a girl realises she has become a victim?

By then, it will be too late. First, she is already trapped into the situation and she is also made to believe that she is responsible for what has happened to her.

And she feels guilty for what she has done. By this time, she is already inducted. The road inside is open for all.

I wouldn't say there is no exit; the exit is bleak.

Will a girl trapped inside be able to see the exit?

Even if she is able to see it physically, she will not see it emotionally and psychologically as she is so damn guilty to face the world. She feels responsible for what has happened to her.

It further means you are ashamed to face the world because you feel your body is also impure.

Trafficking is a crime where your body is tortured, your spirit is broken, your determination is destroyed and your soul is completely scarred.

So, even if all the doors are open, you will not budge. That is because you are psychologically paralysed. 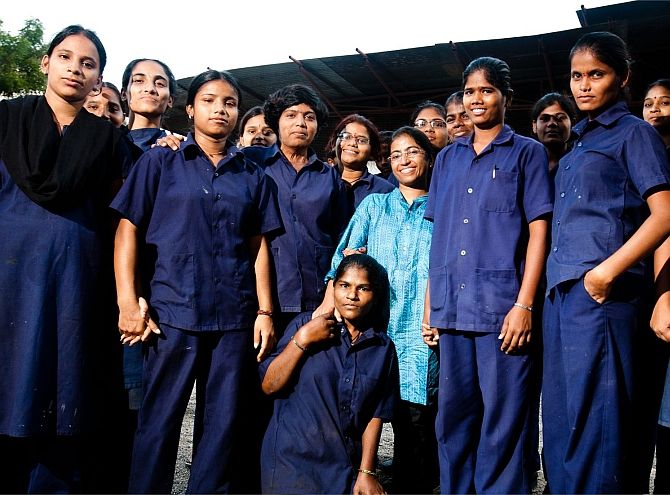 When you rescue them, what kind of mental state are they in?

You won't believe when I say, we get beaten up more by the victim than the traffickers.

In any other form of exploitation, the victim feels we are saving them and feel grateful for being saved, but in trafficking, the situation is different.

Here, the victim doesn't want to be saved at all.

How do you manage to save them then?

Every rescue is forcibly done. That is the advantage the trafficking lobby has. They say, nobody is here by force, everybody is here by choice, and that this is a willing profession.

We call it sex work and let's legitimise it.

But the truth is, close to 90 per cent of all women are deceived into this trade. Nobody goes there as their primary choice. But those 90 per cent will not say they are deceived. This argument is used by traffickers across the country to legalise prostitution.

When the victims themselves are against you, how do you go on rescuing them?

I feel we are one of the gifted few who have sustained for so long; very few have remained in this field for this long.

The hostility, the aggression, and the resistance by the victims destroy most NGOs, and that is why nobody wants to enter this field.

Those who have entered go off after a while. But we have sustained for 21 years.

Is it your determination that keeps you going?

Yes, it is a totally individual-driven determination. I say that with all honesty and pride.

But today it is not an individual mission; it is a collective effort.

Yes, in the initial years, it was a lonely battle. I have been lucky to see results in my life, and that was because I made it my goal to see results. I did not speak in any public domain till I saw the results.

By results, do you mean rescuing and rehabilitation?

Not just rehabilitating, but preventing too. If it is a young girl, our work is to give her education, get her employment and then actually integrate her back in society.

How can you prevent trafficking?

We do three things to prevent trafficking.

One is to educate girls of the crime and make them understand that there are predators walking around.

Trafficking can happen to a school student, a college student, a slum dweller, a city dweller, that is, women of all ages.

It is a demand-driven $858 billion industry! And demand is for children. So, we have a sensitising platform where our team goes to schools and colleges to sensitise girls about such a crime.

We educate girls on the criminal walking around with various kinds of offers to lure girls, and how girls should spot them.

What we do next is, create community vigilance. The industry of sex trade is driven by the libido of men; it is the male demand for sex that is driving this industry.

We also target all men, talk to them and gather them as Men Against Demand.

One lakh men have pledged their support and through MAD, we are grouping the real men of the world against this crime. 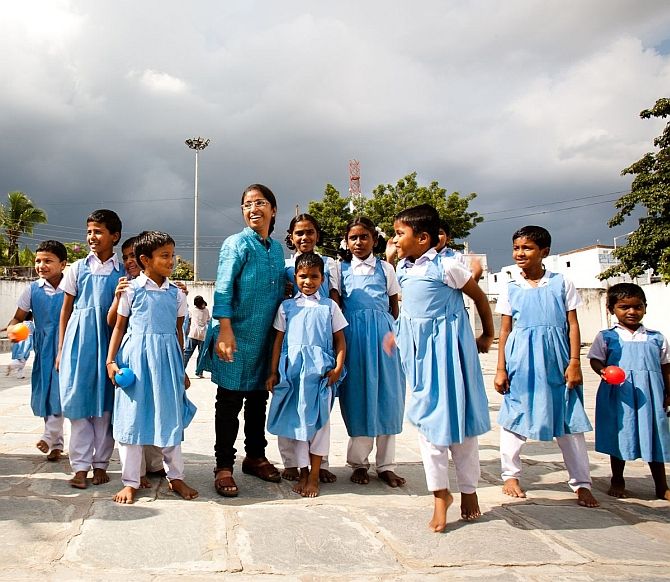 Of late, we hear more and more stories of little girls, as old as 3 and 4, getting raped. Are such crimes on the rise or are they getting reported more?

It has always been there but only now are we talking about it.

I feel the community as a whole has been denying this problem, and that starts with the parents, to school authorities to everyone in society.

We need to understand that we are facing a real problem and the perpetrators are right within us; they are not like the terrorists who come from outside.

There are women like me who give courage to many victims to talk about the crime. She doesn't have to feel ashamed to talk about it. It is shame and fear that prevent a rape victim from talking about it.

Till the law takes its course, the girl will be in perpetual fear.

If you look at the Suryanelli rape victim, she still carries the burden of being gang raped by 40 men for days.

The Suryanelli case has been going on for the last 19 years. And for 19 years, she is living in perpetual fear and nobody is talking about it.

Society has totally isolated her...

Who is this society? Society comprises of us, you and me. Each one of us will have to contemplate; how we have become a part of the crime. Only then a change will come.

Change will come only from within and not from outside.

This has to be our wake up call.

Now that the crime has been committed, the case has to be tackled quickly. The signal should go from the judiciary that this will not be tolerated and the criminals don't get bail.

The girls must be undergoing 100 deaths in 100 days, but these criminals will be out in 1 minute!

That shouldn't happen. For that, the public should openly raise its voice.

What will you tell young girls and mothers of 3, 4 year olds, out there?

They need to understand that it is an unsafe world and they cannot walk around as if it is a safe world out there. So, you need to protect yourself.

For example, the 3 year old in Bengaluru was repeatedly given chocolates by the criminal. Obviously, the mother had not told the girl not to accept chocolates from strangers and also not educated her about 'right touch and wrong touch.'

You mean we have to tell even babies that it is a big bad world outside?

Let us face it. It is a big bad world out there. You can't trust anyone. It doesn't mean we have to be paranoid and suspicious of everyone.

We have fantastic sensitive men and also horribly regressive women. Because there are layers and layers of grey, the solution also is multi-layered. There is no one answer to the problem.

Today, India is perceived as a dangerous place for a woman. Is India an unsafe place for women to travel?

I will say India is as unsafe as any other city in the world. In the US, every four minutes, a woman is raped. The mechanism there is so good that the criminal gets arrested immediately and he is also punished. That is why the incident does not become big news.

But I would definitely say every woman travelling in India should be careful.

The problem is, if someone behaves in a culturally inappropriate way, she gets attention. For example, if you behave in the old city of Hyderabad as if you were in Mumbai, you are in for serious trouble.

What is safety? Safety is about carrying yourself as per the context of the particular place.

Do you think the world will be a safe place for women one day?

Absolutely, it is to see that only, all of us are working day in and out!

My reason for being here is not to get name and fame; it is to see that every breath of mine is dedicated to women and children.

I can be a motivational speaker like hundreds of them out there and give bhashans (lectures) every day, but I prefer to be an activist and do what I am doing.

Today, if I am given a Nobel Prize and at the same time, if there is a rescue, the rescue will be my first priority and not any prize.

This mission is what I have chosen and I will be here till my last breath.