'It is a badle ki sarkar'

'If somebody in your family listens more to your neighbour than you, then doesn't the fault lie with you also? This is what is happening in Kashmir.' 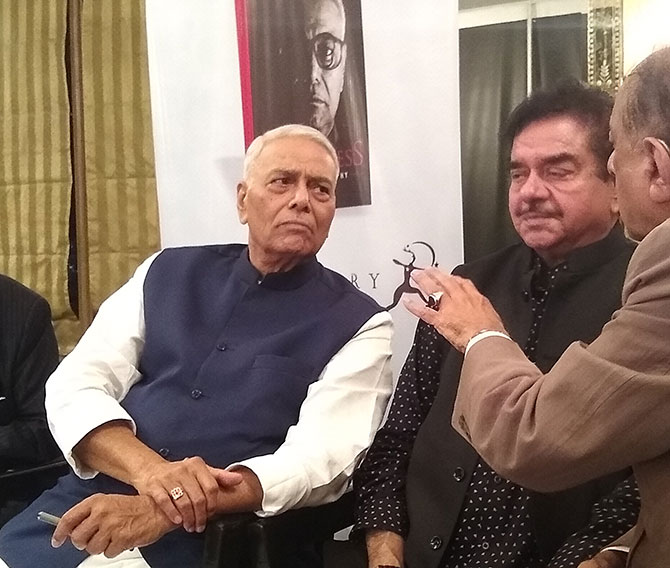 At 82, Yashwant Sinha is still angry, ready to fight injustice. Like the rebel he has been all his life.

There is a certain edge to his anger and vigour and it electrifies the south Mumbai five-star hotel banquet room, where a small band of anti-current-ideologywallahs -- actor-politician Shatrughan Sinha, former Maharashtra chief minister Prithviraj Chavan, businessman-politician Kamal Morarka, various Congress leaders, as well as many private citizens -- have gathered for the release of Sinha's autobiography, Relentless.

A towering man, clad in kurta, pajamas and a dark blue Nehru jacket, who moves slowly but regally, Sinha dwells on his most important message -- the present Indian's lack of ability to protest.

A day later, in an interview to Rediff.com's Vaihayasi Pande Daniel and Prasanna D Zore, Sinha, articulate and thoughtful, summarises what he feels is wrong with India today:

You were talking at the launch of your book in Mumbai about struggle and protesting.
These days one encounters all kinds of people who have been 'educated' on WhatsApp.
The other day I met a taxi driver who kept telling me that Indira Gandhi was a Muslim, Nehru was a Muslim.
When I asked if he had got his information from WhatsApp, he said yes.
When one hears about the reach of false information on WhatsApp -- and one is hearing that all the time these days -- there are two things that come to mind.
Firstly, the spread and reach of this kind of false facts on WhatsApp is spooky and that brings an additional element of fear and it prevents a person from wanting to protest because you are dealing with the unknown.
The second thought that immediately arises is why isn't the Opposition not annulling this misinformation in its own way?

I would like to answer it like this: I have always been a protester in my life, even when I was in the civil service, which is supposed to be bound by a code of conduct, service code, expected to be very disciplined and meekly accept, without protest anything, any humiliation, any decision.

I have never done that in my civil service career. I have always protested when I saw that something wrong was happening. That had led to my transfer from my district in Bihar. That was ultimately what led me to leave that job.

In my civil service career I have said in my book that I have been to jail a number of times.

Why did I go to jail?

I didn't go to jail in a corruption case. I went to jail because I was protesting against something and the last term that I served for 17 days was as recently as 2015.

So why have I done all that?

I have done all that because I believe in petitioning the authorities and pleading with them to do something which is (for) public good. If you are not heard, then you have a democratic right to protest. And there is a consequence. And the consequence could be jail.

The most recent example is the authorities sending me back from Srinagar airport. Then I spent five hours protesting against that decision. So that has been my character, both in service and as well as in politics.

There have been popular protests in this country. The entire galaxy of freedom fighters protested against the excesses of the British regime and wanted India to become independent.

I have always said that if Mahatma Gandhi had meekly accepted the fact that he was thrown out of a train in South Africa at Pietermaritzburg railway station then he would not have been Mahatma Gandhi.

He would have been just another barrister returned from England. But he did that, (he felt) that injustice.

Jayaprakash Narayan protested against the prevailing corruption, the problems in education and staked his life -- in fact he played with his life -- when he was incarcerated and his kidneys were affected.

So we have a long tradition of protest in this country. It is not only the argumentative Indian, it is also the protesting Indian.

This is something that should be happening today also with regard to the excesses being committed by the present government on people in Kashmir or the leaders of the Opposition parties.

It cannot be that all those who are in the BJP are absolutely squeaky honest and all those in Opposition are dishonest.

What is happening especially in the valley of Kashmir which is a very sad chapter of our history, where 70-80 lakh people have been more or less under martial law, are under house arrest. Things are not normal and the clampdown still continues.

So all these are things that should call for a protest. Democracy merely does not mean conducting elections or holding elections once in five years. Democracy means protesting against excesses, whenever those excesses take place instead of waiting for the right time to come. People must be prepared to make that sacrifice.

Fake news, totally wrong news, coloured news is being spread through social media, not only through Facebook, but also on Twitter, all forms of social media.

Gullible people -- who constitute the majority in our society -- would probably accept it as the gospel truth because we have habit of believing everything that is said or written in print.

Kashmir is a very good example of that also. There are channels out here, they are going ten steps ahead of the government, in spreading the wrong message given to them.

They have become so utterly unpopular in Kashmir and are doing so much damage to the national cause. But they are not bothered at all, because they are serving the government's cause and they think they are doing good for the country,

I agree with the Supreme Court that social media needs to be regulated. I have myself been the victim of trolling, receiving abuses on social media. Anything that you might say immediately gets a response from hundreds of people, who are in the paid employment of the ruling party.

So that is what is unfortunately happening. Therefore, as were discussing in Mumbai yesterday, as far as messaging is concerned the government is having a field day and the Opposition is nowhere compared to that, because they don't have the resources.

WATCH: Yashwant Sinha on why he believes in protest. Video: Rediff.com

Why don't they do counter messaging?

They can't do it on the scale at which it is needed, to meet the challenge of the government, because they don't have that kind of resources (to) employ 600 people and place them in Thailand somewhere (laughs) to counter the messages which are being...

I will give you a personal example: Yesterday I was in Mumbai in a public event about the release of the book. And in Pune. I had a very busy and interesting schedule in Pune. The media didn't carry (anything about the event or what was discussed during the book launch).

I met a gentleman on my flight to Delhi today. He said, 'Are you Mr Yashwant Sinha?'

He said: 'You were the finance minister of India?'

He said: 'You are not active anymore?'

So what could I tell him?!

I am not active because (the media has silenced my voice).

At my age I am travelling like not even a young person would do. But the message is not getting conveyed because the media probably has a conspiracy of silence as far as I am concerned.

They must have received instructions from somewhere that you must ignore Yashwant Sinha.

By somewhere you mean the home minister or the PMO?

I said yesterday the entire media is under the control of the government.

So in this situation if someone would have told them ignore Yashwant Sinha, would any media house have the courage to carry what I am saying?

They wouldn't. I hope Rediff.com would! 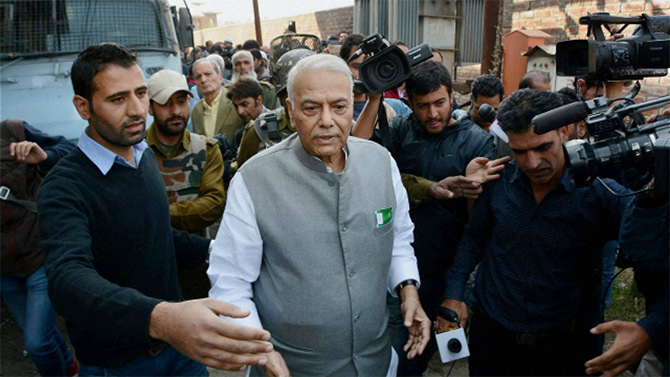 Why do you think the Modi government is not allowing political leaders like you to meet the Kashmiri people? After all, Kashmiris are also Indian citizens.

That is my basic point. One, they are citizens of India; when you are saying that Kashmir is an inalienable part of India, you are not referring to the territory of Kashmir but to the people there who live there.

If the people are alienated, then it is our sacred national duty to reach out to them and ensure that their misgivings are removed and they start believing in India again as they did in 1947 when the riyasat (princely state) of Jammu and Kashmir acceded to India.

The government's revocation of Article 370 has alienated them further. This is not the right approach.

In every report that I have submitted after my visit to Jammu and Kashmir we have emphasised on the importance of dialogue. It is very essential that we engage them in a dialogue and ensure that those who are alienated come back to us.

Let me give an example: If somebody in your family listens more to your neighbour than you, then doesn't the fault lie with you also? This is what is happening in Kashmir.

There are series of mistakes that we have made -- and I am referring not just to this government but previous governments also -- and responsible for the situation in Kashmir.

In a letter written by Jayaprakash Narayan to Indira Gandhi in 1966 he had said very clearly that if we think we will wear them (the Kashmiris) down by force then we are completely mistaken. And that applies as much in 2019.