'Whatever modelling we have, people are saying end of July or beginning of August we will see a peak of COVID-19 in Maharashtra.'
'After which the decline will begin.' 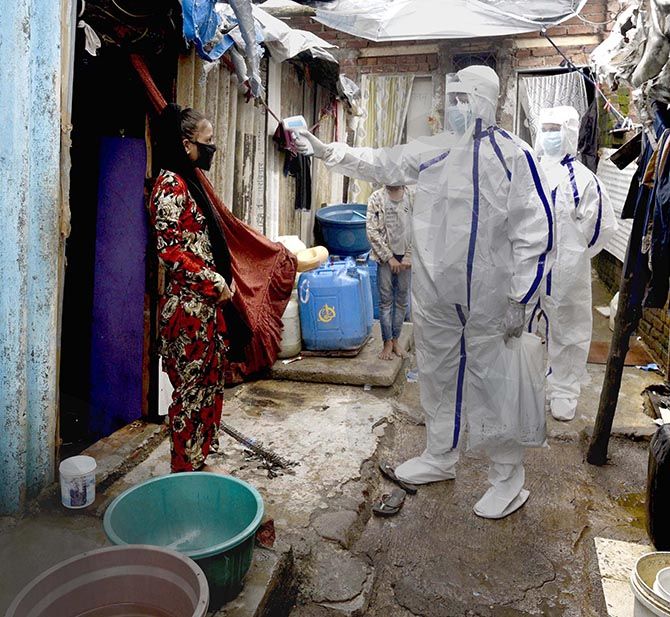 On July 6, an open letter written by 239 global scientists to the World Health Organisation startled the world. It stated that 'there is a real risk that the coronavirus can be airborne, meaning it can spread through microscopic particles that linger in the air.'

The claim in the letter is a significant departure from the WHO's belief so far that COVID-19 is spread primarily by large respiratory droplets when an infected person coughs or sneezes.

The letter has created fissures in the scientific community, with many questioning WHO'S efficiency in handling the pandemic, while others assert that the evidence stated in the letter is unconvincing.

The letter has further aggravated the panic among a public already battered by fears about how and where the coronavirus can strike.

Syed Firdaus Ashraf/Rediff.com spoke to Dr Pradip Awate, Maharashtra's disease surveillance officer, who been tracking the pandemic in Mumbai and Maharashtra, the nation's worst affected city and state, to find out what he thinks about this new theory that the virus could be airborne and if he has encountered any evidence of this in his long battle against COVID-19.

200 experts have written to WHO, saying there is evidence that coronavirus is airborne. What is your opinion?

This is not an issue of belief; it's quite a technical issue. We know this virus for the past six months -- from December 2019.

And what we know is that this is a lower respiratory infection and that is why as per the size of the droplet, it is a fomite-borne (surface-borne) infection and not an airborne infection.

Now these scientists are claiming that if the droplet is smaller, it can glide for a certain distance in the air.

It depends on the air flow and all those things, which can add the airborne infection aspect to transmission.

So, this is a very technical issue and it has to be practically proved by different modelling of the transmission.

Does this mean that the droplets remain in the air and are capable of infecting people many hours later?

The size of the droplets matter.

For example, in tuberculosis, the droplets remain in the air and are known to spread.

As of today, with whatever information and knowledge we have regarding COVID-19, it has not been proved, or at least advocated by WHO, that such things can happen.

However, since new things are coming up, they should be judged by scientific methods.

The scientists say that the virus spreads more in crowded places with poor ventilation. In such a scenario, what should be done?

This is true, as we saw this happening in Mumbai and Pune.

This happened specially in slums where the population density is heavy. The same thing happens in influenza too.

Does ultra-violet light help to kill this virus indoors?

As per the information that has been given by the apex bodies -- WHO and Centres for Disease Control and Prevention (in the United States)-- ultra-violet light does not help.

Dr Benedetta Allegranzi, WHO's technical lead of infection prevention and control, said the evidence for the virus spreading by air is unconvincing, there is no solid evidence. Why is WHO taking such a stand?

Sometimes, someone directly coughs or sneezes into your face and at that time if you are too close with that person then I agree, in such times, airborne infection does play a role.

But whatever transmission dynamics we are looking at for COVID-19 in different countries, it has not been proved that the major reason is airborne infection.

These scientists also say that WHO is out of step with science.

That is why we need to have further research and modelling. Only then will we get the answers.

As of now, there are two different schools of thought and they need to substantiate their findings by solid scientific methods.

Mumbai has witnessed more than 100 days of lockdown. What are the key findings in this time for you? How is the virus behaving? Have you come across anything unusual in its behaviour, spread, etc?

There are no unusual things happening.

We are now doing aggressive contact tracing and segregation of patients which has helped in the reduction of numbers. These are our key observations.

What about the symptoms of diarrhoea in COVID-19 patients? Is the virus mutating?

What happens is that the COVID-19 virus has certain virus specific receptors in our body.

Sometimes you can have diarrhoea, and as of today there are not many cases if you see the percentage of COVID-19 cases, but there are exceptions, where people are suffering from diarrhoea.

After 100 days of lockdown, Mumbai is nowhere near flattening the curve. Why is it so?

Looking at the size of our population, it looks like it will take more time. Only then will the number of cases descend.

When do you see it happening?

Whatever modelling we have, people are saying end of July or beginning of August we will see a peak of COVID-19 in Maharashtra. After which the decline will begin.

It is because of the population of our country.

We have surpassed Russia. Russia has only 14 crore (140 million) population which is close to the population of Maharashtra (11.5 crore/115).

India has 10 times more people than Russia and these things matter when you make a statement like India has surpassed Russia.

Moreover, we are doing more and more tests so more cases are coming out.

Only around one crore (10 million) people have been tested in India out of a population of 130 crore (1.3 billion). Should it matter?

In Maharashtra it is 7,800 tests per million. There is a four-fold increase in testing.

Do you think only a miracle can save us?

Though the number of cases are in lakhs, one thing is sure -- we are observing that about 75 per cent people suffering are mildly symptomatic or asymptomatic.

Only 15 per cent of the population needs medical help.

And only 5 per cent require ICU and 1.5 to 2 percent of COVID-19 patients need ventilators.

This is definitely a public health crisis, but at the same time, the recovery of patients is very good in Mumbai city and even in Maharashtra state. And recovery too is faster.