News
Business
Movies
Sports
Cricket
Get Ahead
Money Tips
Shopping
Sign in  |  Create a Rediffmail account
Rediff.com  » News » 'The youth have taken over the Kashmir movement'

'The youth have taken over the Kashmir movement' 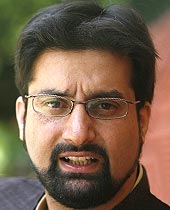 All Party Hurriyat Conference chief Mirwaiz Umer Farooq has appealed to Prime minister Dr Manmohan Singh to take steps to bring peace to Jammu and Kashmir which has been on the boil over killings of protestors by the security forces.

Deploring the Centre's policies on Kashmir, he said, "This is spontaneous anger against the state government and the Centre. I do not agree with Home Minister P Chidambaram when he says the Lashkar-e-Tayiba is behind it. It is anger against the atrocities committed by the security forces." The Mirwaiz spoke to rediff.com's Onkar Singh.

Do you think instead of calling for the army Chief Minister Omar Abdullah should have formed an all-party peace committee to address the peoples' grievances?

The matter is beyond Omar Abdullah, Mehbooba Mufti and the so-called mainstream politicians. I feel the time has come when the Centre should intervene directly in Jammu and Kashmir to restore peace and tranquility in the valley.

Would you appeal to the PM to take initiatives to restore peace?

Will the army's induction help in easing the situation?

We already have the Border Security Force and the Central Reserve Police Force in the valley, and now the army has been called in. The message the Indian government is trying to send to the people is that they cannot confront the might of the Indian forces.

Have you met the people lately?

On July 6 I walked through Srinagar's bylanes. No stones were pelted at us. I sat down with the people at a number of places and asked them to protest peacefully. The Kashmiri people are peace-loving.

What was the basic cause of this uprising?

On June 11, people were marching towards Sopore to protest against the heavy-handed manner in which the security forces were dealing with the innocent people. The march started from downtown Srinagar, marched for seven km unhampered. Then suddenly there was unprovoked firing on the marchers and this has escalated further in the last four weeks.

The home minister says the LeT is behind these disturbances?

This is not true. Only three months ago, the army chief, General V K Singh, had gone on record saying that infiltration has come down and the number of violent incidents had also gone down. Let me tell you on record that the LeT is not involved in the violence in the valley. It is the spontaneous anger of the people which is now being witnessed by India and the world.

Who is leading the agitators if the LeT is not behind it? What about stone-pelting incidents and of a policeman being assaulted by the youth?

I have already said the LeT has no hand in this. The younger generation has taken over the movement and it is they who are calling the shots. They understand the situation better than their forefathers did.

What in your opinion should the Indian government do?

The first and foremost step that they must immediately is to remove the BSF and CRPF bunkers that are located in thickly populated areas. Some of the bunkers are right in the middle of Srinagar's lanes. Once that is done, the Centre should reopen the dialogue with the people of Kashmir. We began the peace process in 2006 with the then prime minister Atal Bihari Vajpayee. But the present government has done little in this direction.

Dr Singh reached out to Pakistan when he said he hopes to have a cordial relations with the neighbouring country but he did not reach out to the people of Kashmir. It is rather unfortunate.

The issue of human rights violations has to be addressed and those who are responsible should be prosecuted. And another important thing that the Centre must do is to restart dialogue with the APHC. 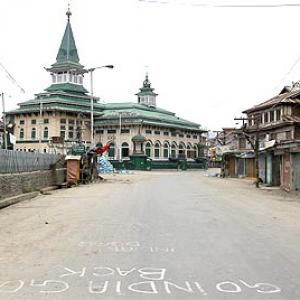