'Will you declare MSP for 100 odd crops that the farmers of India grow?' 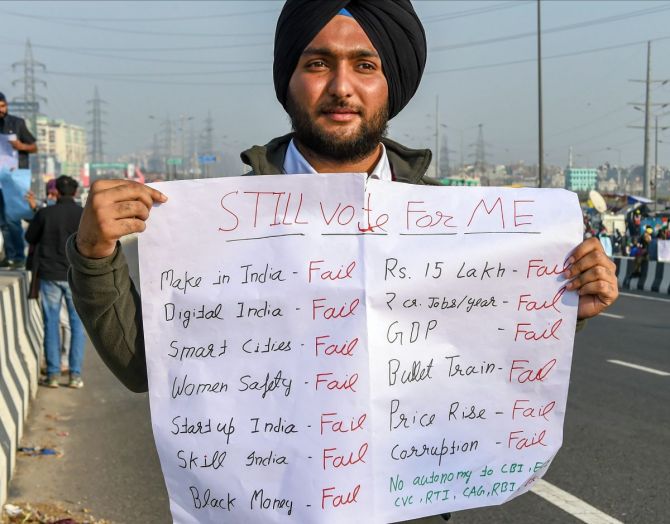 IMAGE: A farmer displays a placard at the Ghazipur border during the ongoing agitation against the Centre's farm reform laws in New Delhi. Photograph: Atul Yadav/PTI Photo

It has been almost a month now that farmers have been protesting against the Modi government over three contentious farm laws.

Even after Prime Minister Narendra Damodardas Modi's repeated assurance that these farm laws will neither end the minimum support price regime nor the mandi system, thousands of farmers have been staying put in the bitter cold outside Delhi.

There have been seeveral meetings between farmer leaders and government representatives with no fruitful outcome.

Now it looks like there is a long haul for farmers on the borders of Delhi.

"The government is pretending through these laws that a certain Mr Ambani and a farmer have the same strength and same bargaining capacity," Avik Saha, National Convenor, Jai Kisan Andolan, tells Rediff.com's Syed Firdaus Ashraf in the first of a two-part interview.

After so many days of protest in Delhi, the government is still adamant that it will not withdraw the farm laws. The farmers have hardened their stand on repealing the laws. Where is this protest heading with no conclusion in sight?

I don't think farmers's organisations are being adamant.

Farmers's organisations pre-announced what they want months ago.

It is the government which is adamant.

Firstly, by ignoring what the farmers are saying.

Secondly, they are trying to stop the farmers coming to protest.

Thirdly, the government is saying many things at the same time.

The prime minister of India said, 'I will bow and listen (to farmers).'

So what the government is exactly saying, nobody knows.

The government has been adamant and changing its position.

Farmers have come with only one demand -- that is they need security of their income which can come through guaranteed prices and guaranteed procurement.

Does it mean that one phrase 'minimum support price', if included in the three farm laws will solve the problem?

This demand of the farmers has got nothing to do with the present agitation.

This demand of the farmers has been there from 2017 when they gave the slogan, karza mukti, poora daam.

Instead of listening to farmers on these demands, the government suddenly came with these three farm bill laws without consulting farmers or farmer organisations.

Farmers are aghast. They are saying now please remove these laws which are in the way of discussion.

The farmers are not interested in discussing these laws as these are an aberration.

They want these laws to be removed so that there can be actual discussion on guarantee of income and assurance of price.

Insertion of MSP in three farm laws is not at all a solution.

This is what the farmers are telling the government.

These laws in any case -- if you don't see from the farmers' perspective -- it is impossible to include MSP or guarantee of MSP.

Because these laws are talking of free markets and prices to be determined by large corporates.

How can two things exist together?

That's why the government is also not talking of an amendment in these laws as far as MSP is concerned.

All the government is saying is that MSP is staying, MSP will not go and if necessary, we will give it to you in writing.

We know MSP will not go.

Our question is: Will you declare MSP for 100 odd crops that the farmers of India grow?

Will you create an ecosystem where the government gives an assurance that sales take place at MSP?

These laws don't talk about that.

Isn't it too much demanding MSP for 100 crops? Imagine the inflation in food prices. Where will the government get the money to procure so many crops under MSP? Is it practically possible?

I said the government must declare MSP for 100 crops.

If the government can calculate the cost of production for paddy, then it should calculate it for lauki (gourd) also.

We don't know how much it costs for Colgate to produce a toothpaste, but the government decides on MRP (Maximum Retail Price).

The government tells Colgate that it cannot suddenly come to the market and sell toothpaste at Rs 1,000.

It is a public consumption item so Colgate must declare a price and the government makes it legal binding so they cannot charge more.

Therefore, MRP is there.

MRP is implemented for every product that is sold in India to 135 crore people.

So, we want declaration of MSP.

We certainly do not want the government to buy karela.

We are saying the government must create an environment for farmers to sell their produce.

For example, they create an environment for electricity generating companies by assuring them what their price will be.

They tell electricity companies that they will give 16 per cent over their cost of production.

Why can't the government do the same thing for the farmers?

The consumers are paying electricity bills and not the government.

You asked about inflation. The ghost of inflation has always been used to keep food prices down.

Because people should not shell out more money to buy food.

Farmers need to subsidise that.

Is that the logic?

Why not then steel producers or cement producers subsidise and produce cement and steel for losses?

Punjab farmers get Rs 1.2 lakh per farm household every year. It is they who are protesting the most. They get subsidies from the government. They produce excessive rice and wheat which no one wants to eat. How can this system go on forever?

Punjab -- which is a non-rice eating area -- is producing rice because the government is assuring procurement of rice at MSP.

If the government provides an ecosystem -- and I am not saying government procurement -- for say maize which is good for Punjab, farmers will gladly produce maize.

The government is not interfering in the market to stabilise the price of other crops.

It is only intervening to stabilise the price of rice in certain states like Punjab and Haryana.

The PM said, 'We have to interfere in the market and we have to have a market stabilisation fund.'

Private players will buy and you see entire agriculture business is private.

The producer, which is the farmer, is private, the purchaser is private and what the government does is create a mandi which is an environment.

It is like PPP (public private partnership) government hospitals.

The government has set up the hospital, but the x-ray that you get at the Ganga Ram hospital (in New Delhi) today is probably run by a private person.

But the government regulates the price and tells them that the x-ray operator cannot charge more than a certain price.

The government acts as a facilitator and infrastructure provider.

The government must regulate it so that the relative difference in the strength of the bargaining party is factored for.

The government is pretending through these laws that a certain Mr Ambani and a farmer have the same strength and same bargaining capacity.

It is a very fantastic claim to make by the government.