'There will be increases.'
'There is bound to be, but you have to bear with all this.'
'The focus should be to provide optimum care for those who are in the need.'
'We should focus more on care, better care. Not on testing.' 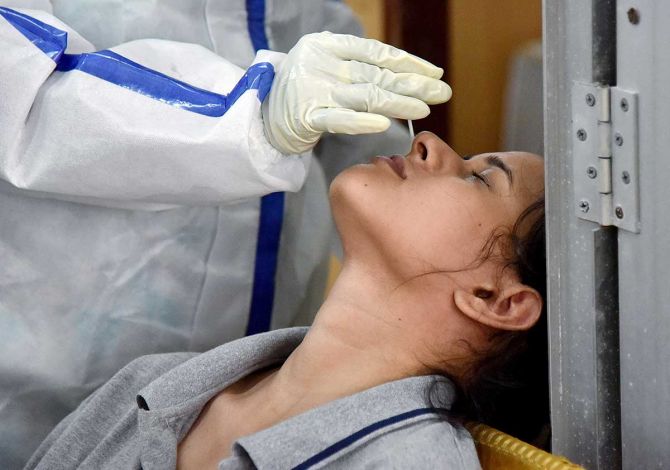 A lakh a day more people ill each day -- COVID-19 cases are now jumping by nearly one hundred thousand or a lakh daily in India.

They said community transmission was now evident all over the country.

'Increasingly, COVID-19 positive persons are being reported from small-sized towns, as well as from rural areas.

Sero-surveys* have revealed that the disease has spread to most parts of the country indicating community transmission of COVID-19'.

Dr Sanjay K Rai, who heads the Indian Public Health Association, and is a professor at the Centre for Community Medicine attached to New Delhi's All India Institute of Medical Sciences, spoke to Vaihayasi Pande Daniel/Rediff.com and explained that this surge of cases was not "unexpected" and reflected that the country was now in the middle stage of the pandemic.

Dr Rai says the rise in cases is related to the amount of testing happening, be it in Delhi or other parts of the country.

Testing has been stepped up to one million tests per day and maybe some days more than one million.

The public health expert gives the example of New Delhi by way of illustration.

According to the figures available with him for Tuesday (September 8), for instance, New Delhi reported approximately 3,500 cases and they carried out 55,000 tests on that particular day. 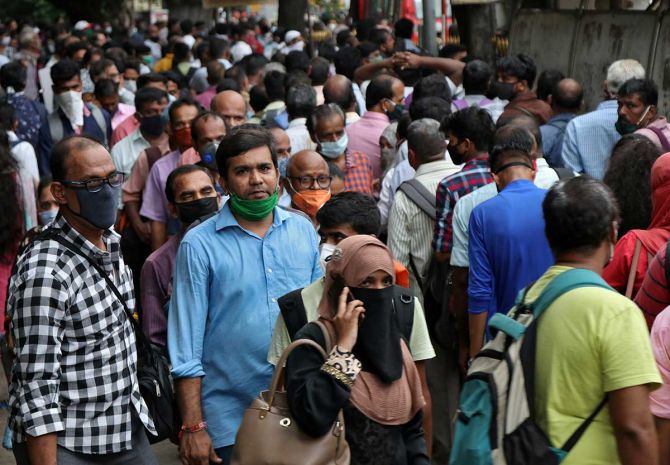 Dr Rai goes on to explain that the sero-surveillance has uncovered that Delhi has had a six per cent increase in cases over 30 days.

And that "if you convert six per cent into numbers, taking Delhi's population as 2 crores (as per 2011 census figures) that means around 12 lakhs were infected in one month's time. That means 40,000 infection per day occurred during that time but you detected only 1,200 to 1,500 per day. So, if you increase the number of tests, the case numbers increase. There is no end to this type of testing."

He feels the situation calls for a new testing strategy.

"There are various stages of an epidemic -- beginning phase, then ongoing community transmission phase and then the endgame phase. Definitely we are not in the beginning phase. We are in the middle. Definitely we are not close to the endgame phase also. That is very far away. So, when this wide community transmission is occurring, if you increase the number of people you are testing, you will detect more cases. That will only aid the numbers."

Dr Rai strongly feels that attention should move away from testing, because it is very costly and turn towards containing deaths and upping the quality of care.

He says the expenditure on testing is "huge" with as many as 12 lakhs tests being done per day and the Government of India is already spending too much money on its testing strategy.

"Now, the focus should be to decrease the deaths -- only to decrease the deaths. Don't test everybody. There is no need. You are hardly detecting all the cases. Even with this huge number of testing -- some 10 lakh or one million tests per day -- you are detecting hardly two to three per cent of the total estimated cases. All sero-surveillance reports are showing that."

Dr Rai instead suggests a strategy of selective testing and not testing everyone.

He says it is more important to test the people who need to be tested -- those who are having fever and other symptoms suggestive of COVID-19 or those who are in very close contact with someone ill with COVID-19 or healthcare providers or those with comorbid conditions. 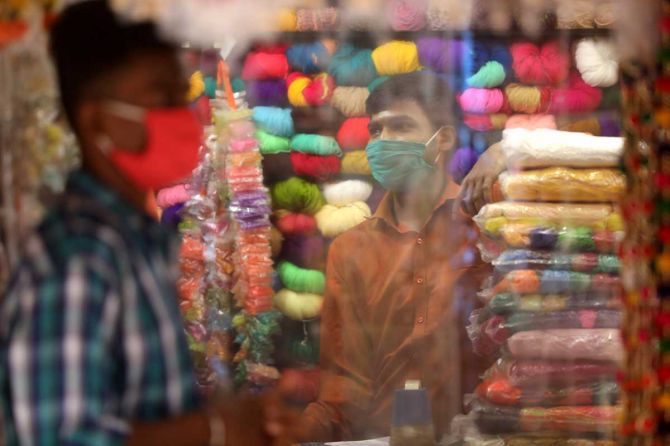 IMAGE: A shopkeeper waits for customers inside his shop in Mumbai, September 6, 2020. Photograph: Francis Mascarenhas/Reuters
"Now it is time for mitigation. Provide better care to those who are in the need."

From testing the emphasis should shift to "mitigation".

Testing, earlier, was a means of separating the infected from the non-infected, but now with community transmission in full flow, that is less necessary.

"Now, there is no need to separate. Hardly you are detecting the full number. You are only detecting three per cent of the cases."

Again, Dr Rai stresses, "Now it is time for mitigation. Provide better care to those who are in the need."

Testing is not the only reason case numbers are going up, pan-India, though.

"Definitely from fewer locations and geographical areas, this is spreading. So, the graph is going up. More people are exposed and disease is progressing."

According to him, Mumbai and Delhi are slowly reaching case saturation points as per the sero-surveys done.

Dr Rai instead advocates opening up facilities on which livelihoods depend because though numbers will rise as the disease progresses, he doesn't believe the progression of the disease will not be that much faster than it already is.

"There will be increases. There is bound to be, but you have to bear with all this. The focus should be to provide optimum care for those who are in the need. We should focus more on care, better care. Not on testing."

*The testing of blood serum for the presence of antibodies that might have formed if a person had contracted COVID-19 at some stage. 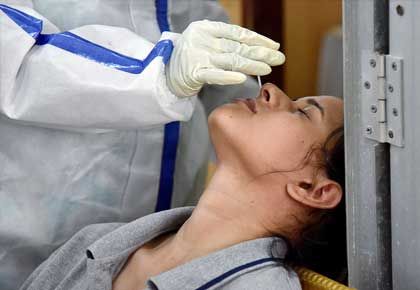