'They have no other agenda, but to perpetuate hate.'
'They have destroyed the economy and polity and they survive only on hate.'
'They think through hatred, they can mobilise the large chunk of Hindu votes.' 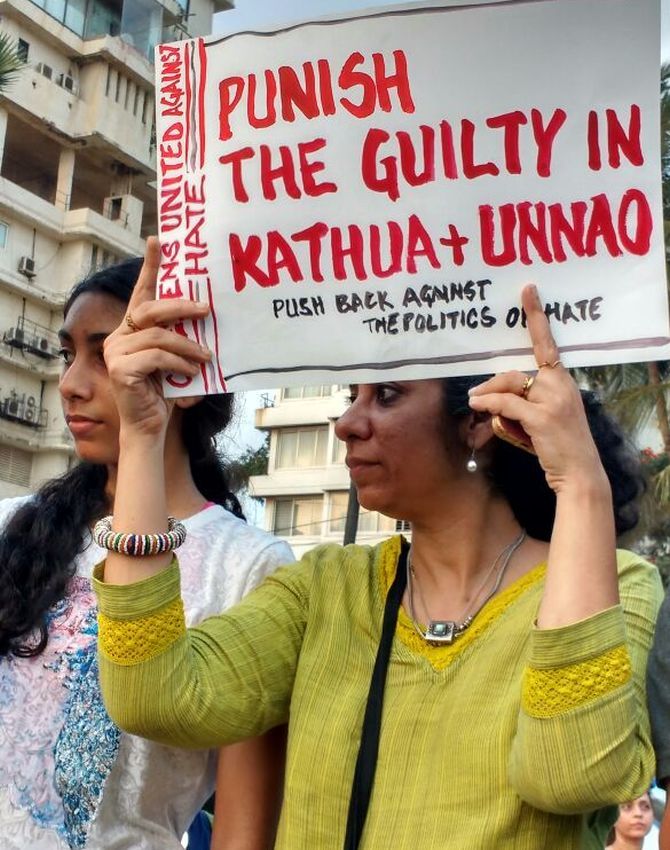 IMAGE: A protest in Mumbai against the Kathua and Unnao rapes, April 15, 2018. Photograph: Uttam Ghosh/Rediff.com

In their letter to Prime Minister Modi, the former bureaucrats said, 'Given your supremacy within the party and the centralised control you and your party president exercise, you, more than anyone else, have to be held responsible for this terrifying state of affairs.'

'Instead of owning up and making reparations,' the letter added, 'you had until yesterday chosen to remain silent, breaking your silence only when public outrage both in India and internationally reached a point when you could no longer ignore it.'

"The way things are, the way the powers that be is responding, the way UP is being run, the way various BJP governments and the central government are running its affairs, we don't see any light at the end of the tunnel," M G Devasahayam -- one of the 49 civil servants who sent Modi the letter -- tells Rediff.com's Shobha Warrier.

In the letter you and 48 former civil servants, you have described this as the darkest hour in the history of independent India. Were the Kathua and Unnao rapes the reason why you wrote the letter?

During the last 3-4 years, there has been a culture of governance by fear emanating from Delhi.

Kathua and Unnao are manifestation of this culture. Hence, our strongly worded letter to the prime minister.

Till now we used to say the Emergency was the darkest period (in post independence India's history). I personally know the excesses of the Emergency and the kind of horrors that happened then.

Why do you say the situation is far worse than the Emergency?

An average citizen is living in fear now.

It was not this bad during the Emergency.

This particular incident (the Kathua rape) has three other dimensions. One is the rape of an 8-year-old little girl which itself is a heinous of all heinous crimes.

It happened in January and there was no action taken for three months. Only after an article appeared in the Indian Express that all this happened.

When the police tried to file a case, a large group of lawyers, politicians and others took out a rally waving the national flag to protect the rapist.

Has something like this happened anywhere else in the world?

The third aspect is when the matter came up for debate the BJP (Bharatiya Janata Party) spokesperson started abusing everybody. Will the spokesperson take a stand without sanction from the high command?

That is why when you analyse the whole incident, you see that this is a hate crime, rape most foul and murder most foul with a political agenda.

You mean this is different from the many other attacks on women and young girls that are happening in the country. More than a social issue, it is more political?

Occasionally, crimes do happen, but this is far, far, worse.

It reflects the very conscience of the character of the nation. In this particular case, we see a total failure and collapse of governance.

All of us former civil servants were part of governance once. We see that it is not an isolated crime, but a collapse of governance itself.

In your letter, it is written that you find the response of our government, the leaders of the political party inadequate and feeble...

We are not expecting any response from the prime minister or anybody.

They have no other agenda, but to perpetuate hate.

They have destroyed the economy and polity and they survive only on hate.

They think through hatred, they can mobilise the large chunk of Hindu votes.

Some feel politics and religion have been dragged into a heinous crime.

Nobody is dragging politics and religion into the crime; it is already there.

The crime is a religious communal hate crime. And the crime happened inside a temple.

The letter says you don't see any light at the end of the tunnel. Do you really feel so?

Yes, the way things are, the way the powers that be is responding, the way UP is being run, the way various BJP governments and the central government are running its affairs, we don't see any light at the end of the tunnel.

Are you of the opinion that the BJP is winning elections in many states because of the polarisation happening in the society?

Absolutely. Otherwise, what do they offer?

Look at their development agenda. The GDP growth is a fraud.

You mean the public does not support the BJP at all?

Yes. Only the hardcore Hindutva people are supporting the party.

They do not know what Hinduism is, they do not know the compassion and greatness of the Hindu religion; they are only interested in their physical welfare.

The Modi government won more than 300 Lok Sabha seats in 2014 and have an absolute majority to rule the country...

It is totally wrong to say that they won an absolute majority. Only 31% voted for them. 69% voted against them.

Because the skewed kind of electoral system we have, 31% gave them 284 seats.

With the help of their alliance, they got more than 300 seats.

This is not an absolute majority. But they captured power.

In the last four years, what kind of governance have they given?

Everything is controlled by the prime minister's office. Excessive centralisation is happening.

He is a democratically elected prime minister, but he has not held even one media conference.

A fear psychosis is being created among the people. Financial management is in ruins.

'Even worse than Emergency'

Vappala Balachandran -- a former Research and Analysis Wing (R&AW) officer who served as special secretary, Cabinet Secretariat -- explains his rationale for signing the open letter to the prime minister in an e-mail exchange with Saisuresh Sivaswamy

Who took the initiative for this open letter? Were there any ex-bureaucrat you approached and who refused?
Do you all meet up regularly, or do you keep in touch over the phone/WhatsApp/Skype, etc?
How do you decide the time is ripe for articulating your sentiments?

Although belonging to different services and batches, we have come together as responsible citizens of India to register our deep concern:

a. At the continuing incidents of mindless violence in the country, especially those targeting the minorities, and the lackadaisical response of the law enforcement machinery to these attacks.

b. On the inadequate implementation of our existing laws which provide adequate protection if they are implemented with the necessary will and determination.

Who takes the lead in penning the letter? After the first draft, I suppose it is circulated among all of you for amendments, etc?
Is it an open forum, or do you have designated roles -- like, someone may be good at penmanship, another maybe good at coordination, etc?

This is an informal body from all over India and we consult each other, elicit suggestions and make representations to the authorities. Similar appeals have been made earlier too. This is not the first time.

This is a particularly strongly worded letter. What is it about the present that makes you feel so despondent?
You have called this the darkest hour for Indian democracy.
Considering that all you have witnessed the Emergency from closer quarters, even served during those dark days, surely to call now the darkest hour seems a bit of a stretch?
To recall, then civil liberties were suspended. Surely that's not the case now.
Why do you still rate this the darkest hour?

Yes, I (personally, as I don't want to involve other members) strongly believe that this is the darkest hour of our democracy, even worse than the Emergency since the law and order authorities did not permit such wanton killings during that era.

On the other hand, law and order all over the country was very peaceful during the Emergency, although the free press was muzzled.

You have taken a considerable swipe at your younger colleagues still in service -- saying that they seem to have failed in their duty. Is that a call to civil disobedience one senses here?
What will you have them do, bound as they are by their service rules?
Surely, in your long and distinguished career, you were faced with moments when you were not fully in tune with what your job required of you. How did you handle such moments?

In appealing publicly we were only calling for the implementation of the existing laws. By no stretch of imagination can anyone call it as 'a call for civil disobedience', as you have described.

Kathua and Unnao are heinous crimes, no doubt, where the courts are seized of the matter. The cases will be seen to their logical end, and the guilty will be punished -- as they should be.
But how do you draw a line from these crimes to no less than the prime minister himself?

Never in the past has a lawyers association objected to the filing of the chargesheet by the concerned police officials. Nor have sitting ministers of a particular political party openly addressed such a body justifying this illegal action.

Even the prime minister had described the incidents 'shameful' on April 13. He added: 'I want to assure the country that no culprit will be spared, complete justice will be done. Our daughters will definitely get justice.'

The President also said on April 18 that the Kathua incident was 'barbaric'. He added: 'It is the collective responsibility of society to ensure that such a thing does not occur'.

We as a body are doing exactly that.