'We are Indians not by chance, but by choice.' 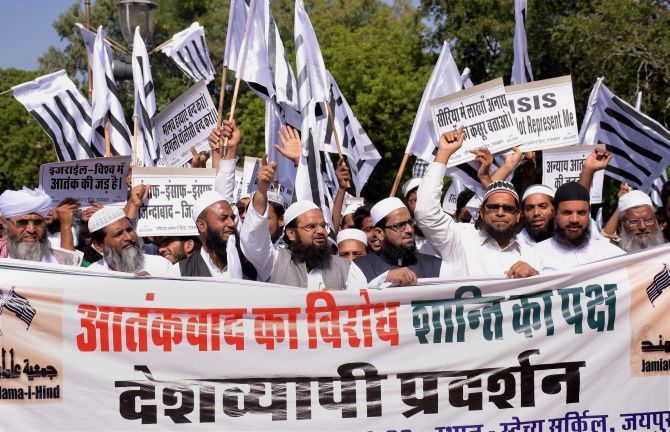 The Jamiat Ulema-I-Hind took out a huge morcha of Muslims last week against the terrorist attacks by Daesh in Paris.

Maulana Mahmood Madani, leader of the Jamiat Ulema-I-Hind, spoke to Syed Firdaus Ashraf/Rediff.com about why there is no place like India for Muslims.

What was the reason you took out the morcha against the Paris terror attacks?

Moreover, if the violence is propagated in the name of Islam, our responsibility is doubled for two reasons.

Firstly, Islam is being demonised by this act and secondly, people will feel this is the true face of Islam. The Holy Quran does not permit such acts. This kind of terror act is like the murder of all mankind.

Which quotes does Daesh use from the Quran to justify the killings of kafirs(unbelievers)?

There is no ayaat (verse) in the Holy Quran which states that the kafir needs to be killed. It is about war and about the people who are in war.

So Daesh is misinterpreting the Quran?

It is a 101 per cent wrong interpretation. Even in war, if your opponent drops his weapon, you cannot kill him according to Islam.

For example, if tomorrow you and I are at war against each other and you are without a weapon, I do not have the right to kill you. I can catch you and arrest you, but I cannot kill you. 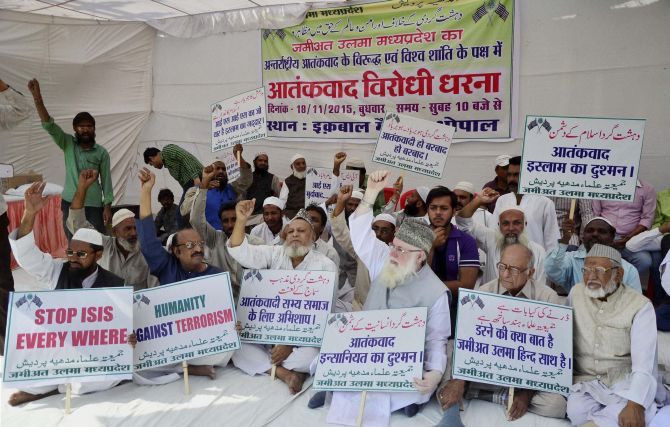 Do you feel Daesh is a blot on Islam?

Yes, it has become a blot on Islam. It is a game plan against Islam which has brought ISIS (Daesh) to life.

Everyone needs to oppose ISIS (Daesh) and to fight against it. Fighting against ISIS (Daesh)is the true jihad. It is misusing and misinterpreting jihad.

ISIS (Daesh) is cruel and cheats. They are oppressing people in the name of Islam and it is a big sin.

At how many places did you take out a morcha to oppose Daesh?

In 75 places. At some places there were thousands of people whereas in others it was too short a notice to build up a critical mass.

If we take out morchas from 75 locations across India and on an average if 200 people were present at each site, then over 15,000 people took part in the morchas.

In Kolkata there were thousands of Muslims who participated in the morcha against ISIS (Daesh), as was the case in Assam and in Mumbai.

Aamir Khan came under fire for his comments on the situation in the country. Do you agree with what he said?

You recently said there is no better place for Muslims to live than India. Can you explain this?

I want to say only one thing: Indian Muslims have no better place to live than India. We are Indians not by chance, but by choice.

We know that this State (India) cannot be a State of Islam, but still we preferred to live in India. So this is our country and we are its stakeholders. And there is no place that is better for us than India. 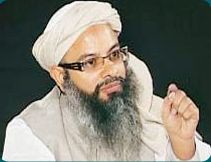 Do you feel Muslims are facing discrimination under the Modi government?

That discrimination was there before Modi also and is happening even now. I agree with this.

But in life that is the beauty of living, as there will be a challenge to life. We have our problems and issues. Lot of things will not get solved immediately, but we will fight according to our principles and keep on fighting.

And in spite of all those bad things, I will say India is still the best place for Indian Muslims to live. These bad things give us strength to live. There is no disillusionment.

So far 18 Indians have joined Daesh. Why do you think Indian Muslims are joining Daesh?

This is bad. There should not have been even one person joining ISIS (Daesh) from India.

However, if you compare this number with developed Western countries, it is hardly any percentage.

If you see there are 18 crore (180 million) Muslims in India and if only 18 go, then that is a very small number. Still, I feel it is wrong to join ISIS (Daesh).

Indian Muslims must know that ISIS (Daesh) is not Islam. It can be anything but Islam.

Can you specify what discrimination Indian Muslims face under the Modi government in relation to previous governments?

This is not a subject to discuss. It will get mixed. I will discuss this issue some other time.

On one hand you say there has to be an Islamic Caliphate and on the other hand you say Daesh is wrong when they project themselves as the Caliphate.

The prime minister of India must be a good person and bring prosperity to our country and take care of each and every community. We all want this.

If, however, tomorrow you elect a bad man for the job, does it mean we should not have a prime minister? If men are good, then the system is good. Will you call this khilafat (opposition)? ISIS (Daesh) is halaakat (death).

Daesh appears to have captured the imagination of many young Muslims all over the world. Hasn't it?

More than 99 percent of Muslims across the world will not come into the trap of ISIS (Daesh). Some Muslims have fallen prey to their propaganda, but they too want to return now.

What does Islam say about nationalism?

Hubbul watan minal imaan (One needs to love one's homeland). It is a part of Islamic faith. We believe in sacrificing our lives for our country and that will be a very proud moment for us.

Many people say Muslims are loyal to their faith first and then to their country. What do you have to say about this?

Many communal people say he is a Muslim first and then he is an Indian. I tell them I have two eyes. Tell me which eye should I keep and which one should I rip out. 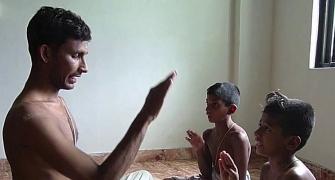 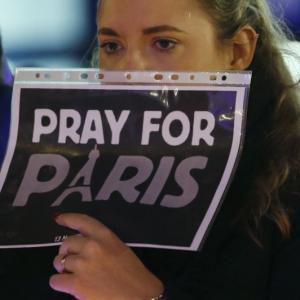