'303 seats ki sarkar has problems with a cartoonist.' 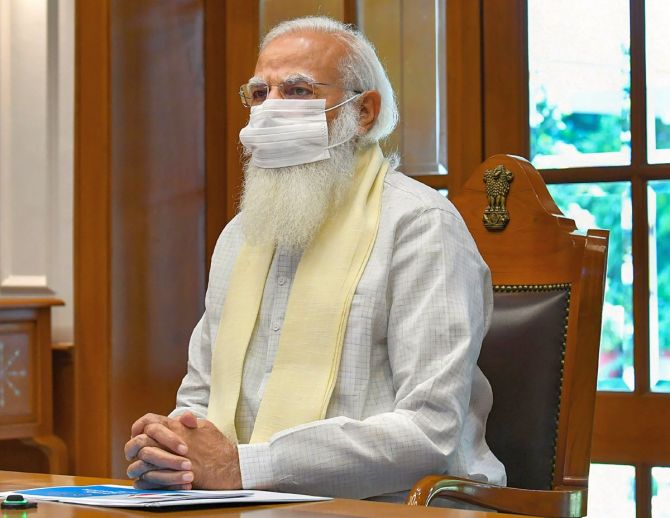 Cartoonist Manjul got a shock last week when he received a notice from Twitter stating that it had been sent a notice from Indian law enforcement agencies asking the social media major to suspend his account.

Manjul has been critical of the Narendra Damodardas Modi government and had earlier drawn cartoons criticising the government's handling of the Covid second wave.

"My cartoons are about humour and satire and still if you find it problematic, then this is really a mashallah sarkar," Manjul tells Rediff.com's Syed Firdaus Ashraf.

The first part of a must-read interview!

Twitter clearly told me in the letter that they are not taking any action against my account right now.

Twitter told me that they got a message from the Government of India to take action against my account.

They (Twitter) are not taking action against the account, but only informing me about the letter from the government for the sake of transparency.

They then suggested four ways for me to deal with the situation by seeking legal help.

What was your first reaction after you got the message from Twitter?

I was angry to get the letter.

I am drawing cartoons since 1989 and I am in this profession since then.

I am not some person who is abusing this government day in and day out.

Whatever I am writing (and drawing) is with some humour.

More interestingly, nobody is asking the government why they have sent this letter to Twitter against me.

Being a citizen of India, it does not sound good if some person tells me that I am violating the laws of our country.

I am a law-abiding citizen of India and a cartoonist after that.

The general trend is that the government finds certain tweets objectionable, but in your case your account itself was found objectionable.

I read the mail twice and checked the e-mail ID too just to confirm if someone was playing a prank on me.

There could be one option, I could have kept quiet and done course correction.

I am not here to fight (against the government), but on the other hand, I want the people of our country to know what kind of government we have.

I have not posted anything which has violated any laws.

They are sending notices to people stating that what you are posting on Twitter poses problems for them, and now it is your job to find out what is the problem and be in a state of worry.

The government does not specify what is the problem, but just sends the notice.

Did you feel somewhere your cartoons criticising the Modi government for the second Covid wave was problematic and they did not like your cartoons as they were becoming more popular?

Why should one not be critical of the government for its handling of the Covid second wave?

Even now they are saying under Modi they successfully managed the second wave.

They are saying it now because they know the second wave of Covid has receded.

If you don't see the paradox in this statement and make cartoons, then I feel you should not be a cartoonist.

You rather bang thalis supporting the government.

There is a couplet by Adam Godvi: Tumhari fileon mein mausam gulabi hai (In government files, the country is doing a good job). Sab changa si (all is well).

The point is, my cartoons are about humour and satire and still if you find it problematic, then this is really a mashallah sarkar.

303 seats ki sarkar has problems with a cartoonist.

If you see the history of the world, in every period there has been no king or democratically elected prime minister who didn't have to face criticism.

Give me one example where they have not been subject to criticism.

Pandit Nehru was criticised, so was Indira Gandhi.

Pandit Nehru was accused of scams and was called names.

Now you say that your government does not want to hear any criticism.

You just want people to hear your monologue and everyone should repeat that monologue, then what do I say! BJP leaders accuse cartoonists like you of being a toolkit gang who wants to destroy Modi's image.

Modi was elected to make India great and not make his image great.

These people have coined one slogan every 15 days and fooled the people of the country.

There are no oxygen bottles in our hospitals and you are talking of toolkits.

You are expecting the Congress to praise the Bharatiya Janata Party. They are the party in Opposition.

The same way they expect that whatever PM does a cartoonist like me must praise him.

If you are expecting this, then there is something wrong in your expectations.

What you expect from your supporters, you cannot expect that from your opponents.

It is not that I only abuse the government.

Till 2014, they were telling me I am a very good cartoonist (because I was criticising the Congress government).

If you cannot run the country well, then cartoonists cannot be blamed.