'Till the time the Modi government is ruling, they will write off loans of corporates and give opportunities to rogue businessmen to run away, so we will have to come again and again on the roads to demand our just rights.' 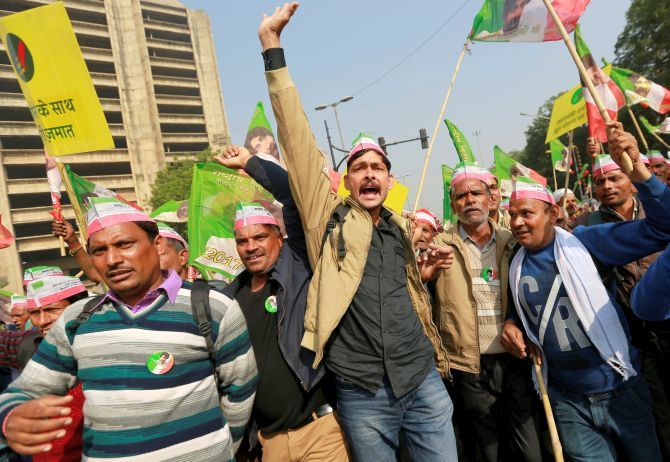 The farmers's Dilli Chalo movement brought the national capital to a halt for two days, November 29 and 30, with farmers across India pouring into New Delhi to protest against the Narendra Damodardas Modi government for not granting them better remunerative price for their crops.

The farmers have protested before, but this time the difference is that around 200 farmers organisations have come together for the protest, along with professionals like doctors, lawyers, even IT engineers, all under the banner of Nation for Farmers.

The latest protest comes eight months after the Long March that concluded at the Azad Maidan in Mumbai by farmers from all over Maharashtra under the banner of the All India Kisan Sabha. At that time, farmers had asked for a better price for their crops and implementation of the M S Swaminathan Commission report.

"It is because the Modi government is anti-farmer and pro-corporate that we are protesting once again," Ajit Navale, state secretary, AIKS, tells Rediff.com's Syed Firdaus Ashraf.

In March farmers came to Mumbai to demand their rights, after which there was an agreement with the Maharashtra government. After eight months the farmers are in Delhi protesting for their rights. Why?

All our demands were not met. Therefore, we had to come back and protest and demand our rights. The problem which exists in Maharashtra for farmers is also the problem in other states.

More than 200 organisations have come together in Delhi to demand three things.

Secondly, give 1.5 times the price of their produce as mentioned in the Swaminathan Commission report.

And thirdly, a holistic policy must be formed for farmers and a special Parliament session must be called to discuss farmers issues.

It seems as if nothing has changed and nobody cares for farmers in the government as you take out morchas again and again.

We come on the roads because the vision of the Modi government is not pro farmers, it is for corporates and company owners.

The government believes that if corporates flourish then that development will trickle down to the poor on the ground, but in reality this policy does not work.

So till the time the government has this pro-corporate viewpoint, we will have to come and protest for our rights.

What are you achieving by these morchas? The government does not seem interested in listening to farmer grievances? Will you achieve anything by this morcha?

This time there are 200 farmers organisations that have come together and are demanding for their rights under the banner of Nation for Farmers.

Intellectuals too have joined us and even Opposition political parties are joining us. Middle class people and professionals like doctors too are joining Nation for Farmers.

The government will have to do something now for farmers and if they don't, then they will suffer (in the elections).

What can the government do when Indian farmers are overproducing all crops?

The problem is not overproduction of crops, but the problem is of distribution, as people are dying of hunger.

There is enough food, but people don't have money in their pockets to buy the food that is produced by farmers.

People are jobless and they don't have money to buy food grains. Therefore, there is an impression that India is producing too much of food grains, but that is not the truth.

If India is overproducing food grains, then how come children and Adivasis are dying of hunger?

Today, there is so much over-supply of onions that there are no buyers at high rates that will benefit farmers. So how can you say Indian farmers are not over-producing?

Onion is a seasonal crop. Now farmers have got their crop in the market and suddenly you are seeing over-supply.

But the same onion, after 3, 4 months, you see, will be in short supply and cost more.

You will then cry and say onion prices are sky-rocketing.

And what will the government do then? They will press the panic button and ban the export of onions and call for its import.

This is called an unequal distribution problem and not, as you are term it, an over-supply of onions.

There is not much of a difference between what India consumes from its own agriculture produce compared to what India eats.

In fact, we produce a little less. In the case of onion it is a seasonal crop so the government must provide cold storages and infrastructure to store onions.

In the absence of that, what happens is that onions reach the market in big numbers and prices fall drastically. So there is lack of planning from the government side to solve farmers's problems. Do you feel it makes an iota of difference to the Modi government that the farmers are protesting?

The Modi government promised the farmers before the 2014 election that they will give 1.5 times the cost of their produce as mentioned in the Swaminathan Commission report.

When the time came to give that cost of 1.5 times of their produce to farmers, the Modi government went to court and filed an affidavit stating they cannot give that kind of money to farmers.

Soon farmers in Maharashtra came on the roads. In Mandsaur, Madhya Pradesh, there was firing on farmers and after that the Modi government agreed to farmers's demands.

They acted under pressure, but then they did not give actual remuneration.

It is because the Modi government is anti-farmer and pro-corporate that we are protesting once again.

The Maharashtra government proposed a law to allow farmers to sell their produce outside the regulated wholesale markets, which would have helped farmers, but had to withdraw it after the traders protested against it.
So it is the traders who are benefiting and the government does not want to hurt this lobby. In such a situation, what can the farmers do?

These traders are just a handful. They are immensely powerful and you can now imagine when they can bend the elected government's will, then how much they must be exploiting poor farmers?

That is why we want to end this monopoly of traders and give a fair price to farmers for their produce.

The government must give protection to farmers and they must buy the produce of farmers so there is proper and healthy competition between traders and government when they come to procure farmers's goods.

But farmers are very much dependent on traders. During demonetisation, when the traders had no cash, the farmers were crying as there was no one to buy their produce.

That is why we are saying there has to be a co-operative development model where traders, farmers and government must take part. We need to change our existing model so the dadagiri of traders can be stopped.

You are blaming traders, but it is the traders who put their money upfront and run the risk of buying farmers's produce without knowing if it will have buyers in the market or not.

If a price stabilisation fund exists, then the government can keep a control and check that the farm produce cost does not go too high and not too low also.

The prices will be in the middle so that farmers, traders and consumers, all will benefit.

Do you feel after this strike all your demands will be met and you won't have to come on the roads once again to protest?

Unfortunately, till the time the Modi government is ruling, they will have this corporate development vision and they are going to work in the same way.

They will write off loans of corporates and give opportunities to rogue businessmen to run away, so we will have to come again and again on the roads to demand our just rights.