'It is a travesty that I have to prove my commitment to Gandhi and to this country.' 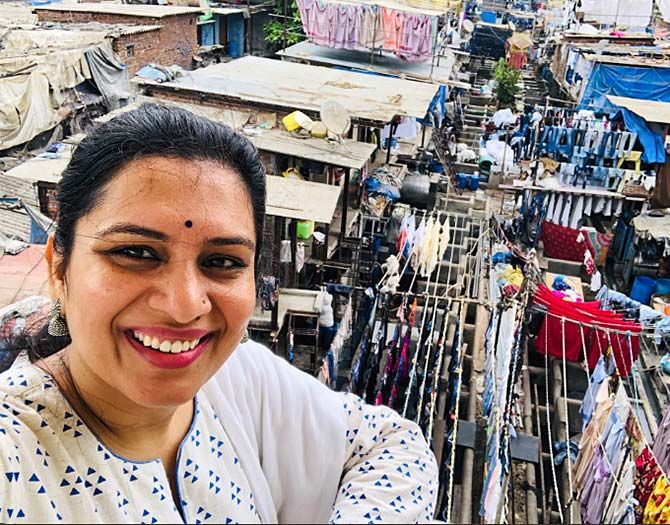 Around the same time, its author, 2012-batch IAS officer Nidhi Choudhari was spending her vacation with her family in Gangtok.

A staunch Gandhian and a feisty lady that Choudhari is, she clarified the matter, as soon as she was able to find Internet connectivity.

By then, politicians in Maharashtra, where she was posted as Mumbai's joint municipal commissioner, had ensured that the state government sent her a showcause notice, but not before transferring her to the water and sanitation department.

"How can these people (politicians) think I could be a Godse-wadi. You punish me for being a Gandhi-wadi," Choudhari, a gold medallist from the University of Jaipur, laments the irony.

Influenced by the Mahatma and freedom fighters like Sardar Vallabhbhai Patel and Bhagat Singh, Choudhari has taken her transfer in her stride.

""The world needs Gandhiji today more than it has ever needed him. We need a Gandhiji to be born again in 2019," she says when asked about the relevance of Mahatma Gandhi in the 21st century," Choudhari tells Prasanna D Zore in an interview for Rediff.com.

Since when did you start reading/understanding Mahatma Gandhi's principles of Ahimsa and Satyagraha?

As children, my father has been exposing us to history of India's freedom struggle, the values espoused by the freedom fighters and our cultural ethos.

Every October 2, if you remember good old times of Doordarshan, they would show Gandhi the movie and I remember watching it every single year as I was growing up.

My father ensured that we were exposed to the values of Indian freedom struggle.

He made us watch movies on the lives of freedom fighters like Sardar Patel, Bhagat Singh.

He also inculcated in us the values espoused by the Gita and Ramayana.

He made sure we read good books.

And even in my school days, whenever there was elocution competition or essay writing, it would always be about the Mahatma.

Gandhiji and other freedom fighters were a part and parcel of our upbringing.

And when was it that you actually started understanding what Mahatma Gandhi stands for?

I believe it was during my 11th and 12th, and especially during my graduation.

I am a student of history and literature.

When I was in the second year of my graduation, Parliament was attacked (December 13, 2001); before that Kargil happened in 1999.

There were lots of calls for war with Pakistan, but I always believed that war was not a solution for the two countries.

I'd watch lot of debates around Kargil war, the Kashmir problem.

In those days I was very fond of participating in debates and began reading lot of Gandhian literature, and why Gandhiji was such a huge proponent of peace and Ahimsa as tools to solve vexatious problems.

Influenced by Gandhian thought, during debates in school and college, I'd always support peace as a means to problem-solving than war.

So then, how does Gandhiji's life inspires you to deal with difficult situations in your life?

One thing, I don't hate people who criticise me; I always try to understand their situation and, like Gandhi, do not hate anyone.

I am that kind of person who would move on and start another struggle within the system and outside through my deeds and try to bring about a change in society.

I believe the best method to change the situation is to keep contributing rather than just running away from problems.

I don't believe in destructive, but constructive method of parivartan (change).

I believe that struggles should end struggles, not beget more.

This is the method Gandhiji followed.

Now (after the controversy over her May 17 tweet and her subsequent transfer), it was the time that people were saying I should continue to do the struggle; this was the moment when I had been targeted without being at fault.

But this is what I tell myself: Should I now continue to let this (her transfer to the water and sanitation department) be in the limelight or should I now focus on how I can contribute for the betterment of society (in my new assignment).

It is the same process that Gandhiji believed in during the freedom struggle.

I must recall how during the peak of the non-cooperation movement Gandhiji withdrew from it because of the violent killing of policemen in Chauri Chaura (A mob set fire to a police station in then United Provinces's Chauri Chaura killing some 21 policemen).

Many people then believed that Gandhiji was doing a great injustice to India (by withdrawing from a popular programme he had started to galvanise people against the colonial rule of the British).

Only and only, when we read Gandhiji in spirit do we understand how pained he was by the violence employed, and how if it were allowed to continue, it would have taken the moral high ground away from India's freedom movement, which was till then largely non-violent.

Nobody understand these Gandhian nuances today.

Lot of people criticise Gandhiji saying that had he not obsessed with a non-violent freedom struggle, India would have got its independence much earlier.

It was because of Gandhiji's farsightedness that we are today largely a non-violent society.

I believe in the same farsightedness and strongly believe in following the Gandhian principles to overcome struggles in my life.

Why do you think your May 17 tweet on Mahatma Gandhi was twisted out of context and misinterpreted? Just so that politicians could grab the headlines for a few days?

I just don't understand what could be other reason because nobody misinterpreted it on May 17 when it was posted.

Nobody raised any objections till May 31.

Is there any dearth of (real) issues (and raising them) in our country? In India, or in the city of Mumbai or in the state of Maharashtra?

You just want to ensure that one person can be punished or targeted to show you care for Gandhiji (Gandhian principles).

Had they cared for Gandhian values then even if I would have actually meant to say, 'Thank you Godse for 30.1.1948' (the day Nathuram Godse assassinated Mahatma Gandhi, which Ms Choudhari had tweeted sarcastically to lament the rise of Godse's popularity in contemporary India and which led to a political hue and cry from the Congress and Nationalist Congress Party which ultimately resulted in the Maharashtra government transferring her to the water and sanitation department).

These people (politicians who missed the sarcasm and the gist of my tweet on May 17, 2019) would never have behaved the way they did had they understood the spirit of Gandhian principles.

They have insulted Gandhiji more than what they thought my tweet supposedly did.

I sometimes wonder why this 15-day delay in misinterpreting my tweet.

Prima facie, it appears somebody was up to some mischief.

How have you adjusted to your latest assignment?

I was on a pre-sanctioned leave to Sikkim with my two children and family when this (controversy over her tweet) erupted.

Since I was away I couldn't respond to this on time.

I explained my position (that this was a sarcastic tweet) to Congress corporator, Mr Sufiyan, who first raised an objection to my tweet.

And then Jitendra Awhad came into the picture, Sharad Pawar Sir.... I don't know why...

How has life and routine changed for you after May 31 when the political storm over your tweet broke over?

I am trying to lead (my life) as normally as I can; I have been warned earlier that freedom of expression comes at a price.

I totally believe that bureaucrats and civil servants are bound by the rules of the government.

We have to mend our conduct in public life, only relating to what is very clearly written (in the rules that govern the public service of bureaucrats) that we cannot criticise the policies of the government.

You can go through my entire timeline, but cannot find any objectionable tweet that would embarrass the state government or tweets that would violate the rules that govern the service of bureaucrats.

If you see my twitter handle you can see four religious symbols after my name.

How could anybody believe that I could insult the Father of the Nation?

My heart belongs to India and soul to humanity.

How can these people (politicians) think I could be a Godse-wadi (believer in the ideology of Nathuram Godse who killed Mahatma Gandhi because he thought Gandhiji was against Hindus and supported Pakistan).

You punish me for being a Gandhi-wadi (believer in the Gandhian principles).

Just because I was outside Maharashtra and couldn't clarify about my tweet on time the matter was blown out of proportion.

It is a travesty that I have to prove my commitment to Gandhi and to this country.

Now that you are back from Sikkim, are you going to respond to the showcause notice issued by the state government?

As I told you earlier, we (the bureaucrats) are loyal to the State of India and Constitution of India, and I will certainly respond to them (to the showcause notice).

I am strongly of the opinion that I have not written anything criticising the government or the Constitution.

I wrote whatever I have written (the May 17 tweet which now Ms Choudhari has deleted) out of a sense of deep pain and anguish over what has been happening over how people are insulting Gandhiji and his values these days.

This is happening when the country and the world are celebrating the 150th birth centenary of Mahatma Gandhi (Gandhiji was born October 2, 1869).

Do you remember that on January 30 (2019) one lady (from the Hindu Mahasabha, the organisation Godse belonged to) shot at the picture of Gandhiji (this was the day when Nathuram Godse assassinated Gandhiji in 1948).

I would avoid indulging in such acts on January 30 even if I were a Gandhi-hater!

Out of deepest pain I tweeted on May 17 and I have been targeted for espousing Gandhian cause. 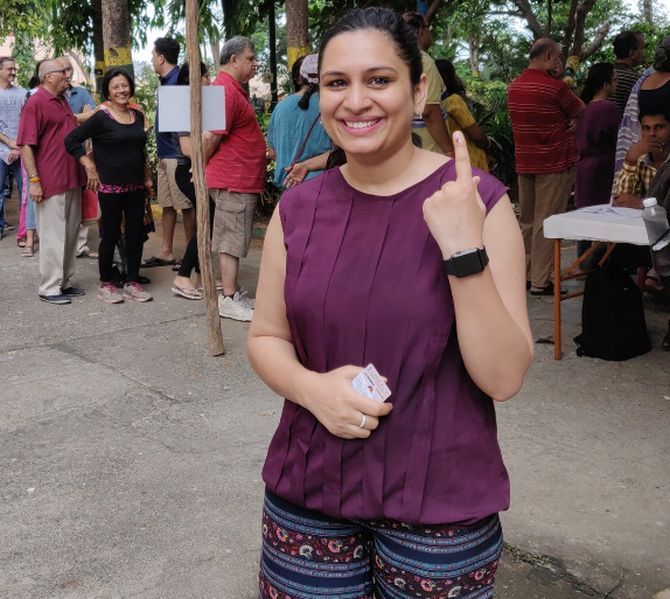 How relevant are Gandhian values like Satyamev Jayate, Ahimsa Satyagraha in 2019, the 150th birth centenary of the Mahatma?

And I can only emphasise how much more we need him in the 21st century.

In the 19th century we were fighting a mighty empire (the British empire).

Today, we are fighting hearts and minds that are full of hatred for each other.

We are, once again, looking at each other, from the lens of caste, creed, community, religion, gender, and all this can be challenged and won over by employing Gandhian values.

Where we are lacking today is we are not ready to love each other.

We are not ready to allow our hearts to be at peace.

Even at the most crucial moments during our freedom struggle Gandhiji was at peace with himself.

That made it possible for him to convince Indians to earn their freedom, their independence through non-violent means.

That's why we need these Gandhian values to play as important a role as it played during our freedom struggle.

The world over, violence against humanity is on the ascendance.

To balm the wounds of what happened in Sri Lanka (the terrorist attack on April 21, killing at least 257 people and wounded 500); what happened in New Zealand (where a white supremacist killed 51 Muslims in attacks on mosques), we need people with Gandhian hearts.

Such acts can be contained using violence and aggression in the short-term; in the long-term what can heal the wounds of humanity is non-violence and peace.

The world needs Gandhiji today more than it has ever needed him.