'People want to see Mr Sinha win again because he has always been there for Patna whether he has been a leader or not.'
'Even when he was an actor, he was a proud Bihari.'
'He is not doing it because he only wants to win an election, he wants to do it because he really loves Bihar.' 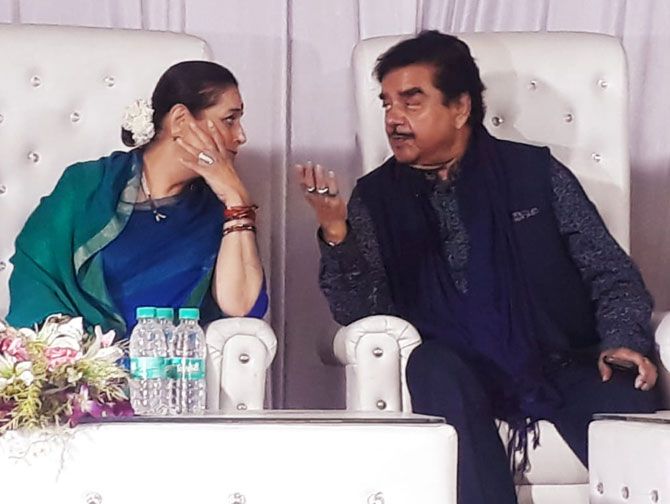 Shatrughan Sinha, the politician and movie star, had spent over 25 years with the Bharatiya Janata Party before joining the Congress.

The BJP he had joined under Atal Bihari Vajpayee and Lal Kishenchand Advani had become a 'one man show' and 'two-man army' under Narendra Damodardas Modi and Amit Anilchandra Shah, Sinha said on joining the Congress fold.

In 2014, Sinha win the Patna Sahib Lok Sabha seat by 265,805 votes. Five years earlier, in the first Lok Sabha election from the newly formed constituency after delimitation, he had won Patna Sahib by 166,770 votes.

Before joining the Samajwadi Party, Poonam Sinha, the former beauty queen, spent most of her time raising her twins Luv-Kussh and movie star daughter Sonakshi. She also played a large role campaigning for her husband's previous two Lok Sabha wins from Patna Sahib.

Their daughter Sonakshi did a road show for her mother in Lucknow and is expected to do the same for her father in Patna Sahib.

As the wife-husband duo battle it out in the heat and dust of what has been a fierce 2019 campaign, the twins Luv and Kussh Sinha are helping their parents in their respective campaigns.

Kussh was in Lucknow, where his mother contested the election against Union Home Minister Rajnath Singh. Luv has been in Patna accompanying his father or conducting his own outreach programmes with voters.

Luv has acted in two films, which didn't do well, and is now the assistant campaign manager for his father in Patna Sahib. It is in this all important role that he needs to deliver a hit.

In a conversation with Rediff.com's Archana Masih, where he mostly refers to his father as Mr Sinha, Luv Sinha says that even though his father has changed parties, he remains the same individual who is not afraid to take a stand.

A lot has changed for the Sinha family in this election. Your father left his old party and joined a different party, while your mother has entered politics and is contesting the election from another party.

This time, we are not with the old team and party, but one thing that remains the same is the individual.

The BJP likes to take credit for my father's success, but when the BJP lost (the Lok Sabha election) miserably in 2009, Mr Sinha won with a record margin. The BJP can't explain that.

Now there is a different party, new allies, new individuals, but the fact remains that Mr Shatrughan Sinha remains the same individual who speaks up for what is right and is not afraid to take a stand.

Did your mother always want to join politics or was it a surprise?

No. As a family, we are very united. We were aware of what was happening behind the scenes. 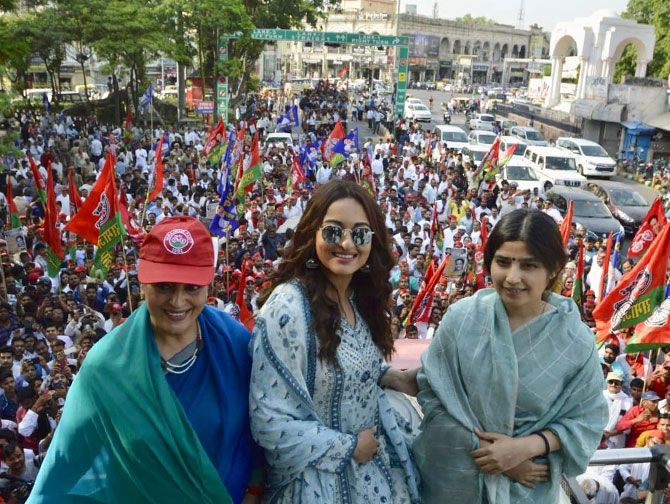 Do the children offer any advice to her since she is a fresh entrant?

She is not a fresh entrant; she has been with my father throughout his political journey. She is not a novice.

My mother has had a large hand in my father's campaigns. She has worked very hard. The difference was that this time she was doing it for herself as a candidate.

As a family, we are lucky that we listen to each other. At end of the day we all want the same goal.

What does it mean to have two parents in two different parties?

Being in different parties is their choice. All that matters to me is that they are my parents and I support their decision. I support my parents like any child should. I think that is the duty of any child. 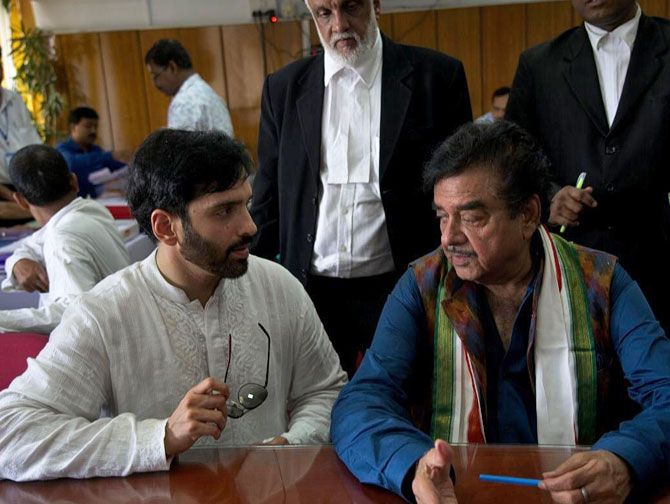 It will be a tough election this time because unlike the BJP, the Congress does not have much of an organisation in Bihar.

In the last assembly election, the BJP lost miserably compared to the RJD.

We are part of the alliance with the RJD. The RJD has foot soldiers and a very strong team in place. It is a Mahagatbandhan, we need to remember that as well.

But 5 out 6 of the assembly segments in Patna are held by the BJP. It's a difficult fight for your father.

That's in Patna city. If you look at that, yes -- but it is a large constituency and a large number of voters are not in the city.

Mr Sinha did not win only because of the BJP. In fact, the BJP was trying to work against him.

For us, at the end of the day, the voter will decide and take a decision.

The Congress is depending on Mr Sinha's star power to garner votes in other parts of the country.

Do you think he was not doing that before, for the BJP? Even then he did campaign in other states for the BJP.

We know the kind of crowds he pulls and the love he gets from the citizens of Patna. No other candidate gets that at least. 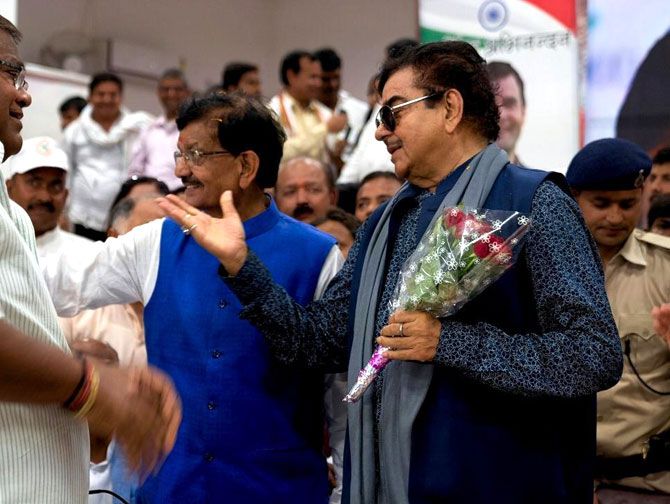 What have been your father's achievements as MP?

The BJP likes to spread lies. In his previous term he has used 107% of his MPLADS fund. He even asked his other colleagues who had leftover funds to support his work and they helped.

In his last term when detractors claim he was not active, he used 106%, which is again when other MPs supported him and he did more work for Patna Sahib.

Other than that as central minister, he brought AIIMS to Bihar. He had a massive ghat created for Chhat devotees, he got a storm water pump house made which prevents area from flooding, these are works that the public is aware of, but the BJP likes to portray that no work was done.

Your father, it is said, only comes to Patna during elections.

If I turn that question around and ask when has Mr Ravi Shankar Prasad come here in the last 18 years?

What has he done for the citizens of Patna and Bihar after being a four term Rajya Sabha MP and despite being a Cabinet minister?

What are his major achievements in IT in Patna?

But he is not elected by the people. He can tell the people 'Give me a term and I'll deliver'.

So if you are not elected by the people, aren't you supposed to work for the people?

As part of the central government, you have a bigger responsibility and have access to resources.

Are you aware of the funds an MP gets compared to a central minister? It is 25 crore versus 1,000s of crores that a minister gets. 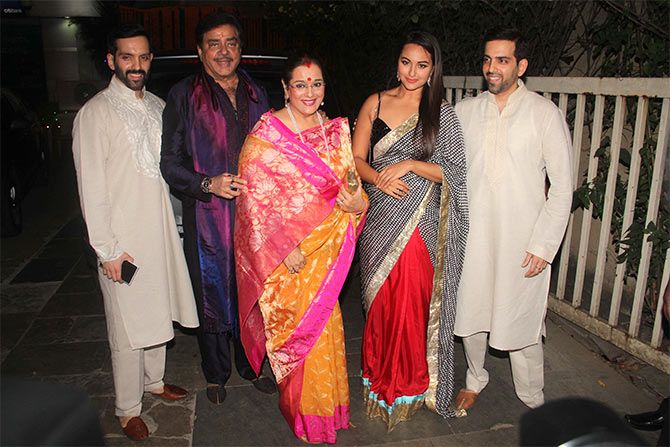 What have been some learnings from this campaign?

The love for Mr Sinha is basically the same. His detractors can't accuse him of anything.

They tried spreading this rumour that he hasn't done work, which has been disproven based on actual government figures based on his work.

His not being here is untrue because he has been in Patna every month.

People want to see Mr Sinha win again because he has always been there for Patna whether he has been a leader or not.

Even when he was an actor, he was a proud Bihari. People also feel the same.

A lot of people know he is a sincere and honest man. He is not doing it because he only wants to win an election, he wants to do it because he really loves Bihar. How do you think he dealt with the end of a long relationship with the BJP?

It was not an easy decision. He was associated with the party for 27, 28 years. He was one of the founding leaders of the BJP before Mr Modi and Amit Shah came into the party and reached where they are.

The BJP is no longer the party with a difference, but a party which is different.

If you ask uncomfortable questions, you will be treated a certain way. Everything is decided by the honourable PM and to a small extent by Amit Shah.

There are few ministers in the Cabinet that are highly inexperienced and neither have they won the elections.

People say Mr Sinha was upset that he was not made a minster, but Mr Sinha did not want to be made a minister.

The BJP was saying that because they wanted to find a reason as to why he was asking questions in the interest of the nation.

How will your parents fare in this election?

I will leave it for the voter to decide. They will decide who wins and we respect that.

Of course I would want both my parents to win, but it is not in our hands, the voter decides that and I respect that.