'I see my students as change-makers'

'The easy availability of funds has enabled us to not only hire the best faculty, but has also made it possible for us to retain them with the best possible infrastructure -- labs, grants etc,' Ashoka University VC Malabika Sarkar tells Geetanjali Krishna.
Illustration: Dominic Xavier/Rediff.com 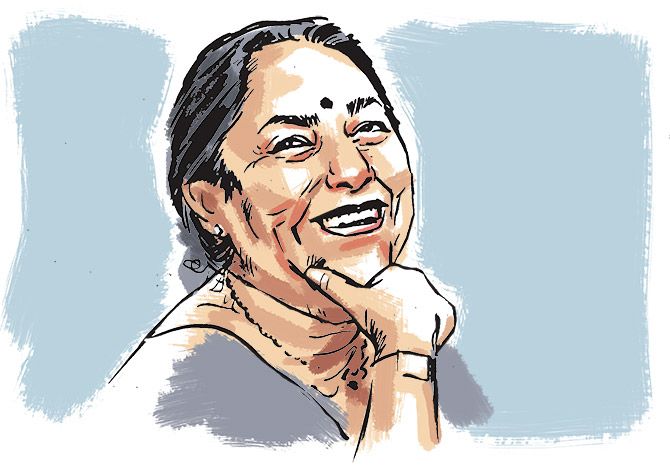 As 2019 came to a close, observers defined it as the Year of the Indian Student.

At a time when university campuses across the country are coming out to protest the Citizenship (Amendment) Act, students have come to be seen as the bravest and most vocal defenders of democracy, speaking truth to power.

Which is why I'm particularly looking forward to meeting my guest, Professor Malabika Sarkar, vice- chancellor of Ashoka, the university credited with making the liberal arts both fashionable and saleable in India.

Prior to joining Ashoka, Professor Sarkar has served as vice-chancellor of Presidency and Jadavpur universities (both in Kolkata).

Associated with Ashoka University since 2015, she has helped develop its curriculum, expand its faculty and create several multi-disciplinary centres of learning and research.

She was appointed its vice-chancellor in August 2019.

I am looking forward to a free-wheeling conversation on what it takes to develop a private university and on helming a liberal arts campus in these illiberal times.

Just then, Professor Sarkar bustles in, immaculately turned out in a silk sari.

We are at Threesixty restaurant at The Oberoi, New Delhi.

She has spent the weekend in the city to catch some rare moments with her husband, a corporate lawyer who shuttles between Mumbai and Delhi.

Ashoka's Sonepat campus where she lives, isn't exactly on the way.

"We do try and meet every weekend in Kolkata," she says.

Life on campus is thrill-a-minute.

"Being a new university that's expanding so fast, there's so much to do," she says.

Having a lot of money must help, I comment, as we pore over the menu.

"The easy availability of funds has enabled us to not only hire the best faculty," she says, "but has also made it possible for us to retain them with the best possible infrastructure -- labs, grants etc."

This is in sharp contrast to her stint at Presidency during its centenary year, when there weren't enough funds to, say, repair the crumbling ceiling in the laboratory.

"We had no option but to install nets below the ceiling to protect students from the falling plaster," she reminisces.

We pore over the menu, discover a shared fondness for fish and I realise that Sarkar has tried every fishy dish on the menu already.

We decide to share some Thai-style Kolkata betki steamed with chilly, garlic and lemon and grilled sea bass wrapped in a banana leaf.

The food arrives on the table, the steamed fish fragrant in a light broth.

Sarkar pauses to taste it and talks about the critical differences between the pedagogies followed by older universities and Ashoka.

"In Jadavpur and Presidency the teaching was unidirectional," she says.

"The professor would lecture and the students would listen. Students often discussed issues with professors, but rarely in the classroom..."

In contrast, 50 per cent of the classroom time in Ashoka is devoted to discussion and students are incentivised to participate by being awarded marks for class participation.

This is why freedom of speech -- a pejorative term for some and such an acutely precious commodity to the liberals -- is an integral aspect of Ashoka's ethos.

Could it be, I ask, that Ashoka is raising a generation of liberal and free thinkers at a time when these are not exactly the most desirable qualities?

"I see my students not merely as critics, but as change-makers equipped with the right skills to positively impact their environment," she says.

"Free thought and criticism have to go hand in hand with a sense of responsibility."

She comes across as a true administrator.

Unsurprising because private universities are as, if not more, hamstrung as government universities these days.

She tells me about the Good Governance Associates programme that Ashoka runs in partnership with the Haryana government.

In this, selected students from Ashoka are trained intensively to work with the district administrations in Haryana as representatives of the chief minister of the state.

"Through the programme, our students learn to not only critique administrative functioning but also find solutions to make it more efficient," she says.

Attesting to this is the fact that the number of companies conducting campus recruitments at Ashoka has crossed 150 this year, and includes McKinsey, AT Kearney, Deloitte, Microsoft, and Business Standard among others.

Meanwhile, the banana leaf parcels emit enticing aromas when we unwrap them.

We pause to taste them before moving on to another of her pet subjects.

In spite of the availability of funds at Ashoka, Sarkar says, no university in India can ever match the resources of a Harvard or Yale.

"What we do have in ample measure are intellectual resources," she says.

The need of the hour, she says, is greater collaboration between institutions in India.

"I'd like to collaborate with more such institutions for student and well as faculty exchange programmes," she says.

Another way of developing world-class intellectual resources is the active creation of multi-disciplinary centres of learning and teaching.

For example, Ashoka's Trivedi Centre for Political Data in partnership with the University of Michigan analyses authoritative political data and disburses knowledge on India's political life through an open access platform.

The Centre for Studies in Gender and Sexuality at Ashoka is the first in India to conduct research into both gender and sexuality.

"I believe that such multi-disciplinary centres will take our intellectual resources to the next level," she says.

"I'd like to develop many more such centres in the years ahead."

Sarkar chooses to end lunch with coffee while I opt for a raspberry and rose sorbet.

I ask her about her fabled work ethic and what keeps her going at such a punishing pace.

"My days are so full that I've no time to think about it," she laughs.

She starts at 10 am, often working past midnight.

"I make up by flying to Kolkata every weekend," she smiles.

But it turns out that there too, she has her work cut out.

As president of the Women's Coordinating Council, West Bengal, the apex women's organisation in the state with representatives from more than 74 social welfare organisations, she spends much of her weekends fundraising.

Although she rues not having enough time for her academic work (she's a professor of English literature and last published Cosmos and Character in Paradise Lost on John Milton's poetry in 2012), the feisty 71 year old won't have it any other way.

After all, one can never be too old to be at the vanguard of an academic revolution and Professor Malabika Sarkar is living proof of that.