'Rahul is also coming there... from Amethi. We will meet there.' 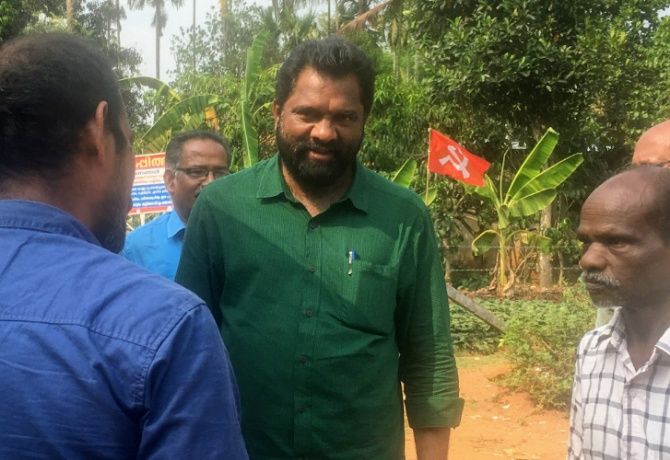 The candidate is taking a nap.

We have driven 90 minutes, up and down hilly roads, navigated our way through roads in different states of construction, asked for directions about 20 times, made our way past fallow fields, palm plantattions and tribal hamlets till we finally arrive at a typical Kerala homestead in the middle of nowhere where the Left Democratic Front nominee and his traveling party are taking a lunch break.

Communists have taken over every part of the house, shooting the breeze. Jayan Cherthala, the Malayalam actor who is the star turn at the LDF campaign meetings, emerges from the candidate's room to ask if we "could do the interview another time.

He retreats, seeing the stern disapproval on our faces, returns to tell us that "He is taking a few calls and will be with you shortly."

Through the gap in the door, we spy the bare back of P P Suneer -- Communist Party of India full-timer and Rahul Gandhi's Left opponent in the Lok Sabha election in Wayanad -- as he takes a siesta.

In the modest living room, under the gaze of Jesus and Mary -- this, despite the presence of so many Communists, is a Christian home -- and the daunting smell of fish curry served for lunch, we wait for Suneer to wake up.

The previous afternoon, at the LDF campaign office in Kalpetta, P Sandosh Kumar, the Front's convenor for the election in the constituency, tells us, "The Left representation in the Lok Sabha must increase. The Left presence will ensure pro-people projects and guarantee that democracy and secularism is protected."

Sandosh Kumar, an advocate from Kannur, is scathing about Suneer's rivals. "Equating Suneer and Smriti Irani (Rahul Gandhi's main opponent in Amethi, the other Lok Sabha election he is fighting in 2019) is the message that Rahul Gandhi is communicating through his deeds."

"Suneer and Smriti Irani represent two different ideologies, two different streams in Indian politics, he says, "and the national Congress chief declares that both are alike for him."

Suneer has woken up. Over to the candidate.

A brief interview with the candidate in Payeri, Sulthan Batheri, Wayanad:

In the first Lok Sabha election in Wayanad in 2009, CPI nominee M Rahmathulla lost to the Congress's M I Shahnavas by 153,870 votes.

If Rahul wins both Amethi and Wayanad this election and retains Amethi, Wayanad will see a Lok Sabha by-poll. 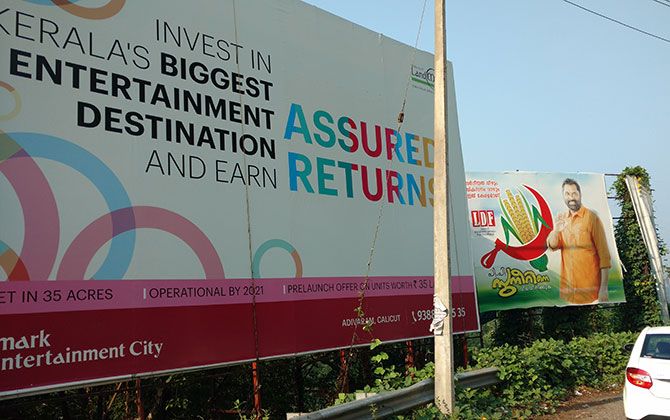 IMAGE: A billboard for P P Suneer on one of the nine hairpin bends on the Wayanad-Kozhikode route. Photograph: Rediff.com

Suneer will almost certainly be the CPI candidate in that by-election. And who knows, his dream of winning Wayanad and running into Rahul in the Lok Sabha may become a reality.