'From 10 am on Tuesday to 3 am this morning, we must have made not less than a thousand phone calls.'
'We kept fighting till the end and we did not leave the room till we got 113 certificates.'
'Two-three losses would have changed the game and the BJP wanted to become the largest party which they did not become.'

The Madhya Pradesh cliffhanger has ended and the results are bound to thrill the group of four Congress leaders -- Digvijaya Singh, Kamal Nath, Jyotiraditya Rao Scindia and Vivek Tankha -- who worked tirelessly for the last two years to ensure that their party tasted electoral success in the state.

That it was no easy task can be from the fact that when the counting of votes finally ended on Wednesday morning, the BJP was just 5 seats behind the Congress tally.

In terms of votes polled, the BJP secured 0.1% more votes than its rival.

And despite its best efforts, the Congress remained 2 seats short of a simple majority, showing what an uphill task it was to defeat the Shivraj Singh Chouhan government which had been in office for 13 years.

"We now have three Congress chief ministers in the Hindi heartland! Would anyone have thought of this in 2014?" Vivek Tankha, the Congress's Rajya Sabha MP from Madhya Pradesh, asks Syed Firdaus Ashraf/Rediff.com.

Despite your best efforts the Congress still fell short of the majority mark of 116 seats.

I don't think it will be difficult for us to form the government.

In the past we have seen in Goa that the governor did not call the Congress to form the government, even though they were the single largest party.

From a Constitutional standpoint, the governor is bound to call us to form the government as we are the largest party in Madhya Pradesh.

Moreover, the Independents are with us and so are the two BSP (Bahujan Samaj Party) MLAs as well as the lone Samajwadi Party MLA; they are not supporting the BJP.

So, our situation is different than that in Goa. And these Independent MLAs are our (rebel Congress) MLAs.

Did these rebel MLAs tell you they will support you?

Yes. They are in touch with us and they are talking to us.

Unlike in Chhattisgarh, where you won a landslide, your margin of victory in Madhya Pradesh is too narrow. What do you think is the reason for this?

We will have to analyse that, but we lost heavily in the Rewa region, which was unexpected. We should have got an additional 10, 15 seats, but we did not get a single seat there. Last time, we did very well there.

You did not project anyone as the chief ministerial candidate in Madhya Pradesh and you still won. Do you think that strategy has worked for the Congress?

It worked for us as we did not showcase one person.

Madhya Pradesh is a big state and, in a sense, each one is like a sector chief.

Each sector comes with its own chief. The four of us, Kamal Nathji, Digvijaya Singh, Jyotiraditya and me, we all four have worked like zombies for the last two years.

We were fighting the BJP who are like the CPM (Communist Party of India-Marxist) cadre in West Bengal at its peak during their rule.

We were fighting a huge cadre-based party without any cadre in the Congress. It was just the four of us together.

We were sure that we would bring the Congress back to power.

And from 10 am on Tuesday to 3 am this morning, we must have made not less than a thousand phone calls.

We kept fighting till the end and we did not leave the room till we got 113 certificates.

Two-three losses would have changed the game and the BJP wanted to become the largest party which they did not become.

Do you think brand Modi has been affected? Or were you fighting Chief Minister Shivraj Singh Chouhan?

If I am not mistaken, of the 226 parliamentary seats in the Hindi belt, 203 went to the BJP and its allies in 2014. Do you think after this election there will be repercussions in the 2019 Lok Sabha election?

We now have three Congress chief ministers in the Hindi heartland. Would anyone have thought of this in 2014?

It is unthinkable that this has happened, especially in Madhya Pradesh.

And look at Chhattisgarh, we have won with a huge majority. 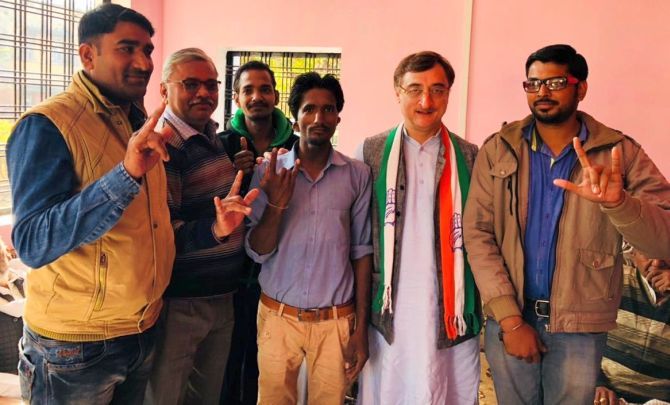 In Chhattisgarh, you had no chief ministerial face, no well-known leader either, yet you won a huge majority.

Chhattisgarh was always more pro-Congress even when it was a part of Madhya Pradesh.

We used to win from Chhattisgarh and that used to be the reason for our government in Madhya Pradesh.

Malwa and Madhya Bharat was always more with the Jan Sangh and BJP. The Rajmata (Vijayaraje Scindia) was from that area and they had good influence there.

Chhattisgarh along with Mahakaushal used to bring the Congress to power.

When Chhattisgarh went away, the Congress in that sense politically faced a bigger challenge.

In the last 15 years, you were not able to wrest power in Chhattisgarh.

The first time we lost elections in Chhattisgarh because Vidya Charan Shukla revolted against the Congress. So in that sense Raman Singh was a lucky man.

Somebody in the Congress would revolt and he would win.

This time too, our leader Ajit Jogi revolted, but people saw through the game.

Why do you think people put their faith back in the Congress?

It was the arrogance and corruption of the BJP that defeated them.

Everybody who lost, it was due to arrogance and corruption. So many BJP ministers lost.

If the BJP had replaced their 150 candidates it would have been a different challenge for us (to take them on).

What did you do to motivate Congress cadres?

All four of us had different influence areas.

Digvijaya Singh did his padyatra which did wonders.

Kamal Nathji's management and overreach had its own influence in the state.

Jyotiraditya was a very attractive speaker for us and he is very suave. He highlighted issues like the Vyapam scam and e-tenders.

All the push that was needed for the party we got it, so we had a cocktail (kind of leadership).

But your leaders concentrated more on soft Hindutva in Madhya Pradesh.

We are all Hindus. We always prayed at home, and now we have started praying outside the home.

All of us prayed outside our homes too, but the BJP prayed by taking videographers with them. And their leaders were doing this all the time.

The BJP claims that because of them Congress leaders have come out of their secular mode and started praying in temples as you never did this in the past.

Earlier, Congress leaders used to pray in temples, but without a camera. The BJP brought the concept of cameras everywhere.

We are devout Hindus. All of us have prayer rooms at home.

We always went to temples on birthdays and anniversaries. But Congress leaders never publicised this fact.

The Congress was tagged as a Muslim party. How did you overcome that tag?

The tag got de-tagged by all this.

The BJP says you are hypocritical because of your temple rounds.

Are they not hypocrites? The BJP thinks of Lord Ram only during elections, and after elections they forget about him.

But somewhere the BJP convinced Hindu voters that the Congress is a Muslim party, and somewhere you failed badly in countering this perception.

It was an international phenomenon. Europe and the United States were being affected by this, it was not India alone. It was a global phenomenon.

All the liberal parties were labelled like this and so here too that happened.