'On June 13, we will intensify our agitation further by stopping trains from plying in the state.' 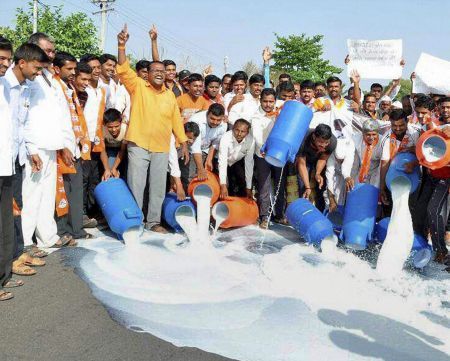 Dr Ajit Navle, general secretary of the Maharashtra Rajya Kisan Sabha -- one of the many organisations spearheading the farmers' agitation in the state demanding loan waivers, an increase in the minimum support price, among other demands -- tells Rediff.com's Prasanna D Zore that the second phase of the farmers' agitation will be more intense than the first one and will see participation from 72 farmers's organisation pan-Maharashtra.

In a meeting on Thursday, June 8, Dr Navle was chosen as the convener of a coordination committee that will have representatives from each of these 72 organisations.

The seven-day ultimatum you had given to the Maharashtra government ended on Thursday. What do you plan to do next?

The seven-day ultimatum we had given to the government has ended.

In these seven days farmers across the state had stopped supplying milk, vegetables and other farm produce to consumers in Maharashtra.

From Friday begins the second phase of our agitation, which will be intensified gradually if our demands are not accepted by the state government.

As part of this intensification, we will:

Are all the farmers' organisations that are part of this joint action plan, and which you say will participate in this second phase, in agreement with this intensification of your agitation?

In the beginning, an impression was created that ours is a leaderless movement and there was some confusion deliberately created to weaken our agitation.

Now, we have formed a coordination committee that will have representatives from almost 72 farmers' organisations in Maharashtra and we will be putting forth a united front in this second phase.

The leadership of this movement is with the farmers and every day we are getting support of many farmers' organisations.

This agitation and strike is called by the farmers and we will not let the government divide us or hoodwink us with their partial acceptance of our demands.

As the convener of this united coordination committee let me inform the government that all 72 organisations will be participating in the second phase of the farmers' agitation.

Aren't you closing all doors for negotiations with the government by deciding to intensify your stir?

We had already given seven days to the government but they preferred to sit on our demands.

We are giving three more days (the intensification of agitation begins June 11) to the government to accept our demand.

The ball is in the government's court now.

IMAGE: Maharashtra farmers protest by spilling milk on the roads.