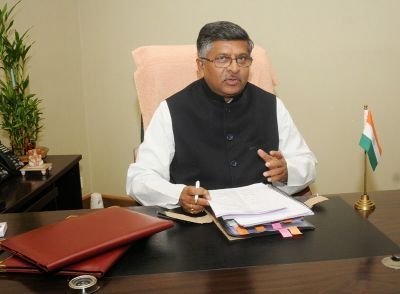 An expansive Ravi Shankar Prasad, minister with joint charge of law and justice and communications and information technology, believes the key task before the new government has been to restore a sense of governance in the country. All praise for Narender Modi’s style of functioning, he maintains the prime minister has played a key role in restoring a sense of purpose in the bureaucracy.

Prasad disclosed that the prime minister has only recently held three successive meetings, a two-and-a-half hour meet with the IT department, a two-hour and a one-and-a-half hour meet with bureaucrats of the telecom and postal department respectively where he urged these mandarins to restore a sense of speedy decision making.  In one stroke, Modi dissolved 80 GoMs as yet another step to initiate a sense of responsibility amongst ministers and their foot soldiers.

This immediately leads to a comparison between Modi’s style of governance with that of former prime minister Atal Bihari Vajpayee. Prasad sums up both prime ministers by explaining succinctly, “Vajpayee was a man of few words and a very good listener; Modi enjoys extraordinary governance experience but he prefers to receive presentations in order to understand the overall picture.”

Modi, Prasad claims, has “no grey areas in his style of functioning as he is extremely focused on his objectives. I rang him up wanting to know his views on a particular matter. He in turn asked me what my views were and then told me to go ahead and do what I believed was correct,” said the minister.

When asked his views over the issue of the Leader of the Opposition for which Congress chief Sonia Gandhi met President Pranab Mukherjee, Prasad maintained that the Speaker’s decision on this issue is final. Citing past instances, he said, “Who will become the Leader of the Opposition is a call taken by the Speaker and is the jurisdiction is of the Speaker alone. The Indian Parliament has followed the convention that the party should have ten per cent of the total strength of the house. If the rule can be changed for 44 members, it can be changed for 30 members or 20 members as well. But this is my own view and a final decision will be taken by Speaker Sumitra Mahajan.”

On the issue of the Congress planning to go to court he replied tongue-in-cheek, “The Congress is free to go to court. Anyone can go to court in the country. As a student of parliamentary practices and as an MP for the last 14 years, these are my personal views that the party with ten per cent (of the total number of members in the Lok Sabha) gets the post. It is a well settled principle. The rule that a party needs ten per cent member strength to be the main opposition party stands since the time of the first Lok Sabha Speaker G V Mavalankar.”

“The kind of energy the Congress is showing (on this subject), if they had reflected honestly on how they had become 44 -- it would have served them better,” he said.

Defending the government's stance over the appointment of senior lawyer Gopal Subramanium as a Supreme Court judge, he said the government has its right to be consulted for appointing judges and also to reconsider the collegium's proposal.

“The chief justice had stated that segregating Subramanium’s file was a unilateral action of the executive and that ‘was not proper’. Subramanium’s name was part of a four-member list sent by the Supreme Court to the government. The government approved only three names for elevation as Supreme Court judges and Subramanium withdrew his consent to be appointed on June 25.”

“The government exercised the right to objection... and we have had ample precedents of this in the past… questions on the collegium system of appointment has been raised many times in the past,” he added.

Prasad said the government was planning to bring a constitutional amendment bill to set up the National Judicial Commission which will look into appointment of judges, replacing the current collegium of Supreme Court judges which had been introduced in 1993.

“Several eminent judges, including the late Chief Justice J S Verma had questioned the working of SC collegium system. Even the Law Commission chairman had said the collegium system should be debated. Our party had promised to bring the National Judicial Commission in its election manifesto.”

"We want to bring the National Judicial Commission in which both the judiciary and executive will be present, but the judiciary will have an upper hand. We will bring the constitutional amendment bill in an objective manner. The previous government had brought the bill, but there were infirmities in it, and it lapsed,” he explained.

On being asked whether this was an attempt to exercise control over the judiciary, the minister said: “Never. We were among those who went to jail during the Jayaprakash Narayan movement, and had opposed the Emergency. We want the judiciary to remain independent.”

The minister is also keen to bring about a National Litigation Policy to dispose of the large number of pending cases. "There are 3 crore cases pending in India right now, out of which 2.68 crore cases are pending in the lower courts. Of them, cheque bouncing cases number nearly 22 lakh, while traffic challan cases number around 18 lakh. These cases can easily be disposed of in Lok Adalats.”

Prasad shot into national prominence as the lawyer in the Ayodhya temple suit case and was in the forefront in arguing the PIL against former Bihar chief minister Lalu Yadav in the fodder scam which resulted in the jailing of several politicians and bureaucrats including Yadav.

Prasad is bristling with ideas across a whole gamut of ministries. He wants India to emerge as a hub for arbitration handling cases dealing with contractual disputes. “I want to push for creating up to three crore jobs if we can push electronic manufacturing in a big way and that will require lots of incentives and duty restructuring. I have already pushed for the creation of eight electronic clusters,” he explained.

“The prime minister is all for increasing digital connectivity and wants all the panchayati raj institutions connected with broadband.  We are laying out a national fibre optic cable that will connect one lakh panchayats,” he added.

Responding to a question of amending various labour laws including the Factories Act, he said, “Labour rights need to be safeguarded and secured. But at the same time, these laws should not be used as a means to deter investment and also production.”

Prasad chose to steer away from controversial issues. On being asked his views on the government’s decision to re-enact the Juvenile Justice (Care and Protection) Act 2000 allowing some juvenile offenders in sex crimes and murder to be treated as adults, he said, “The matter is pending before the Supreme Court. We need to see how we can balance these different points of view especially since India is a federal country and the laws have to be implemented by the state governments.”

On whether homosexuality should be treated as a criminal offence, he said, “(On this issue too) I would like to keep my opinion to myself… we will have to find a way out.”

On price rise, Prasad appealed to the people to show patience. "Our one-month old government is facing inflation created over the last five years. We have brought onions and potatoes under the purview of Essential Commodities Act, fixed stock limits and are taking action against hoarders. There is no shortage of foodgrains and if there is shortage, we can import.”

Recently, Prasad told Parliament that his ministry was determined to take the postal services to every village. “The government has decided to open 80 gramin dak sewa post offices and 80 sub post offices in the country under the rural business and access to postal network scheme. These post offices will be opened in areas with a population of 3,000 in the group of villages (in case of normal area), 500 population in the individual village and 1,000 population in the group of villages in hills, deserts and inaccessible areas.”