'Every case of encephalitis should be tested for Nipah'

'It is a droplet infection and the virus is not airborne.'
'As it cannot stay in the air, the infection will pass from one person to another.'
'It also means it is easy to prevent.' 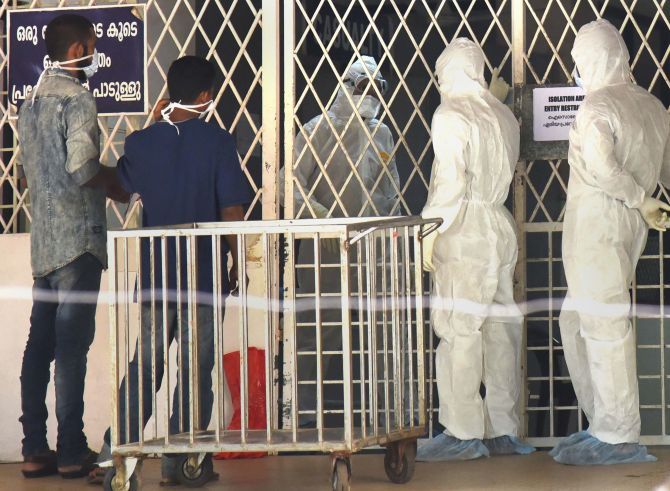 IMAGE: A patient from Odisha, second from left, showing symptoms of the Nipah virus being shifted to the isolation ward at the Ernakulam Medical College in Kochi on June 5, 2019. Photograph: PTI Photo

One year after the first outbreak of the Nipah virus, a 23 year old was diagnosed with the virus in Kerala on June 4, 2019.

Since then more than 300 people have been quarantined and kept under observation.

The Nipah virus is transmitted from animals to humans, and also through human to human contact.

It is associated with fatal encephalitis and respiratory illness. In the initial stages, it causes fever, headache, muscle pain, dizziness and nausea.

WHO reports that 18 Nipah cases were reported in Kerala last year and out of them, 17 died.

The Nipah virus was first identified in 1999 in Malaysia and Singapore when farmers and others who were in close contact with pigs were affected. More than 100 people died in the outbreak that year, and about a million pigs were killed to try and halt its spread.

"It is very important that in other parts of the country, there should be surveillance to find out whether the Nipah virus is present in all the encephalitis cases," Dr K K Aggarwal, well known cardiologist and physician, <below, tells Rediff.com's Shobha Warrier.

For the second consecutive year, Kerala has seen an outbreak of the Nipah virus. It was said last year that Nipah was caused by fruit bats. When bats are there at many places in India, why is it that the virus is confined to this one state alone?

I spoke about this to many experts and I was told that the Nipah virus outbreak was not in Kerala alone. Two episodes had occurred in West Bengal. In all the areas where these bats are present, cases have been reported.

The problem is we do not have an encephalitis policy in this country. (Encephalitis is the inflammation of the brain. Though there are several causes, the most common is viral infection.)

If a person has unexplained encephalitis, and if s/he resides in an area where bats are there, s/he should be tested for Nipah.

You mean, in Kerala, it was diagnosed only because the person was tested for Nipah, and we do not know about the other states as no tests were conducted there?

Yes, it was an accidental diagnosis last year. We came to know about the Nipah outbreak only because a doctor who had attended a conference on Nipah decided to test a patient for the virus.

So, it is very important that in other parts of the country, there should be surveillance to find out whether the Nipah virus is present in all the encephalitis cases.

As the virus spreads among those around them, anybody who is in contact with encephalitis cases also should be tested.

In Kerala, this is the second consecutive year that the Nipah outbreak has happened.

The government thinks if an epidemic happens, it has something to do with the failure of the government. They should understand that no epidemiological infection can be due to government failure.

What is needed is whenever there is an infection, every agency should get involved. The approach should be at the national level.

Not only in Kerala, but in the neighbouring states also, there should be a policy.

There should be a policy for the prevention of transmission from bats.

There should be a policy to prevent human to human transmission.

There should be a policy for the government and private sector to work together.

And there should also be a policy for modern medicine and Ayush.

There should be a uniform policy for what the public should do and should not.

All these policies and everything to know about Nipah should be available on the Web site.

Why should people like me and journalists talk about it when it is there on the government Web site? 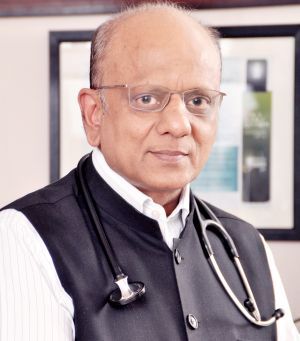 If bats are the reason for the outbreak, does the Nipah virus remain dormant in the bats or are they just carriers?

We do not know. You should also understand that this case (the first case reported) is not a primary case. This is an index case which means, a reported case.

If it is from a pig, do we have the data to confirm it? No.

If it is from a human, then there are more cases of Nipah circulating in the area.

Instead of saying don't worry, the government should be tracing the origin.

What they should be saying is, let us all fight the disease together. Instead of getting into denial mode, they should involve everyone; government doctors, private doctors, the media, the ministry.

You should also remember the government takes care of only 20% of the population. 80% is in the private sector and they can't take care of them.

In my opinion, everybody should say that a terrorist has entered Kerala and all of us should fight together.

So, they should define the role of everyone.

While we are talking about bats spreading the disease, in 1999, in Malaysia, the Nipah virus outbreak was reported in pigs. Does that mean those who consume pork also are at risk?

There are three kinds of transmission: From bats, from pigs, from human to human.

That's why there should be a clear-cut strategy for identification.

Unless you trace the primary, you will not be able to do so. The index case only gives you a case.

Does that mean we still do not know how the virus comes to reside in bats or pigs?

ICMR says 20% of the bats in Kerala are infected with the Nipah virus. That means there is a source of Nipah in bats in Kerala. I don't think these bats are going to stay only in Kerala.

What about the bats in West Bengal, or in the neighbouring states of Kerala?

So, there has to be an epidemiological study on bats in various parts of the country.

Nipah is said to be highly contagious. Does that mean the situation is alarming?

It is highly contagious for the people who are handling the patients infected with the virus and not the others.

It is a droplet infection and the virus is not airborne.

As it cannot stay in the air, the infection will pass from one person to another.

It also means, it is easy to prevent.

That's why I am saying, any doctor or a nurse treating a patient with encephalitis in any part of the country, is at risk.

Do people have to stop eating pork because pigs also can be a source?

Try not to eat anything raw. Wash fruits properly before eating.

Even if it is not Nipah, the general precaution is to stay away from a person with cough and cold.

Since there was a Nipah outbreak last year in Kerala, do you feel if the government had taken some precautionary measures, this could have been avoided?

I do not want to criticise at all. I only want to say, the approach should shift from 'I' to 'WE'. I is the Kerala government. It is fine to say 'we are the best'. But what is needed is the working together of all the doctors, journalists and the public.

It has to be a proactive approach than saying, you don't have to do anything, we will do everything.

Should people be worried?

What is needed is action and not reaction.

The government should come out with an action plan immediately for the government, doctors, journalists, non-governmental bodies and also guidelines for people.